How Do Leafhopper Legs Survive the Launch?

Discoveries about Leafhoppers may provide useful lessons in biomechanics and robotics.

Leafhoppers, a diverse group of insects that pierce and suck sap from plants, can be agricultural pests. Yet discoveries about their locomotion may provide useful lessons in biomechanics and robotics. These tiny insects have a powerfully springy leap. Researchers reporting in the Journal of Experimental Biology have filmed them in action and made some exciting discoveries. 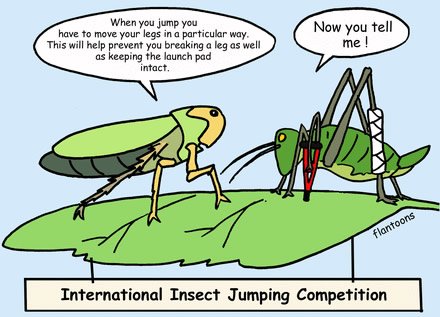 How do leafhoppers jump so fast without snapping their legs? The key is a series of perfectly coordinated motions that begin with muscles contracting in the thorax and transfer energy by precise femur rotation. As the anatomy uncoils to transfer energy to the tibia, the legs elongate while maintaining a smooth and constant thrusting force despite a phenomenal rate of acceleration. Precise posture and perfect timing produce one smooth motion to safely propel the insect from leaf to leaf. Image by Nicola Stead, via Journal of Experimental Biology.1

By studying video footage, researchers have learned that while preparing to jump, the leafhopper contracts muscles in its thorax. The energy generated by these muscles rotates its femurs. This femur rotation transmits the muscles’ kinetic energy to the tibias. The rapid but steady transmission of energy as the leg steadily elongates produces a constant force that pushes off the leafy launch pad. Despite the enormous gravity-defying acceleration, the thrusting force at “the foot-ground [leaf] interface”2 remains nearly constant. Because there are no snapping peaks in the force generated, the launch is accomplished so smoothly and safely in the space of just a few milliseconds that the insect destroys neither legs nor leaf.

Precise posture and perfect timing produce one smooth motion to safely propel these insects from leaf to leaf. Be sure to watch these videos, filmed at 8000 frames per second, showing a leafhopper’s rocket-like launch from the side and viewed from below. 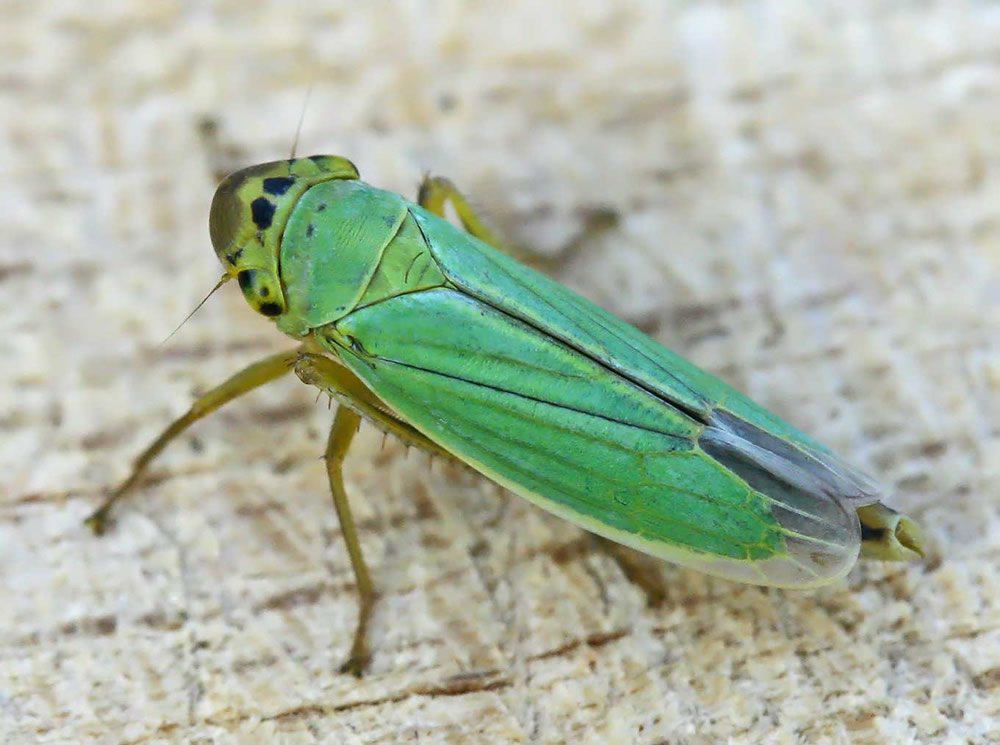 The green leafhopper launches itself at nearly a meter per second with a constant acceleration more than 15 times the acceleration due to gravity. Remarkably, it does this without snapping its legs. Now researchers have learned about the precisely coordinated series of motions that produce a smooth and constant amount of force as the feet push off, protecting the leafhopper leap after leap. Be sure to watch the short videos from a side view and from below. Image by ©entomart, via Wikimedia Commons.

Cesare Stefanini and colleagues at The Biorobotics Institute of Scuola Superiore Sant’Anna in Pontedera, Italy, foresee the relevance of their discoveries for applications in “different research fields ranging from biomechanics to robotics.”3 Biomimicry of the morphology of the leafhopper’s hind legs may provide engineering applications for a variety of systems requiring safe and efficient motion conversion.

Biomimicry is the science of copying designs and processes found in nature to produce technological innovations. Evolutionists often proclaim amazing designs to be evolutionary success stories—the products of blind purposeless chance over time that somehow simultaneously produced just the right combination of anatomical features to function perfectly without, in this case, breaking the leafhopper’s legs. After all, if any part of the system is off, the legs snap and the insect’s leafhopping days are over. This unique bit of precision engineering instead illustrates one way God provided for the needs of the creatures He created, even the lowly leafhopper. Biomimicry applies the secrets of God’s designs—not evolutionary accidents—and takes advantage of the creative genius already present.

Previous Article News to Note, March 30, 2013 Next Article Freedom Under Fire: Your Chance to Speak Up