Did Little Wasps Evolve Big Eyes to Recognize Their Friends?

by Dr. Elizabeth Mitchell on May 26, 2014
Featured in Answers in Depth
Share:
Email Using:
Gmail Yahoo! Outlook Other

Evolution: Not just for survival anymore!

Social paper wasps recognize and remember the individual patterns of one another’s faces. Individual patterns of red, black, yellow, and brown may indicate association with a particular queen or represent relative strength or particular roles in the colony. But whatever the patterns mean, evolutionary biologists believe they are important enough to drive evolution of the facet size in wasp eyes. 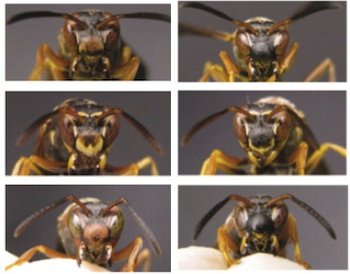 All of these wasps are members of the same species of social paper wasp, Polistes fuscatus. In training tests, social paper wasps have proven they recognize each other’s distinctive facial patterns. They are able to recognize each other because they have a few large facets in their compound eyes. Compound eyes are exquisitely sensitive to motion but their small facets produce fairly low-resolution images. Large facets produce a zone of increased visual acuity within the compound eyes. Image by Michael Sheehan and Elizabeth Tibbetts, via Science.

Compound eyes—the multifaceted insect eyes that produce mosaic composite images—are superb for detecting motion. (You are reminded of this every time your fly swatter misses.) Each facet is connected to its own visual receptor. Therefore, as an object moves across an insect’s visual field, the facets are sequentially stimulated, allowing quick escapes and successful hunting. But this arrangement does not provide very high resolution. Flies don’t see in high definition.

Sharp visual acuity isn’t particularly important for most insect activities. However, for many species of social paper wasps (genus Polistes), knowing their friends and neighbors by sight is a priority, though not a matter of life and death. Researchers Michael Sheehan and Elizabeth Tibbetts learned a few years ago that social wasps recognize and remember individual facial patterns of other social paper wasps. Their recognition ability seems keyed to intact faces, as they didn’t score too well on antenna-less faces, jumbled faces, or geometric patterns. Solitary wasp species failed at these memory tests, showing this ability is unique to the social species.1 Since humans and many social mammals recognize individual faces, this was seen as an example of convergent evolution.

Compound eyes often have a few facets with a larger diameter than the others. Those larger facets produce a sharper image, providing some insects with a zone of visual acuity. Sheehan and colleagues report that the large facets in smaller wasps were proportionately even larger than the large facets in big wasps. But this is only true of those small species that sport individually painted faces. Anonymous-looking wasps seem to have no need of such big eyes and therefore, the researchers believe, didn’t “evolve” them.

Sheehan and colleagues believe this discovery has evolutionary significance. They conclude that distinctive facial markings and the eyes to see them coevolved. They believe their work demonstrates that anatomy and sensory abilities evolve not just to support survival but also to enhance social interaction.

“The Big Bad Wolf had it right,” says Sheehan. “When Little Red Riding Hood says, ‘Goodness, what big eyes you have,’ he replied, ‘The better to see you with.’” For some paper wasps, Sheehan explains, “We found convincing evidence that the wasps evolved better vision for the purpose of telling one another apart. This is consistent with the idea that hearing, smelling, seeing or other sensory capabilities in animals, including humans, may have evolved in response to communication signals like we see in the wasp.”

Not all paper wasps have distinctive facial patterns (aka “visual signals”), but species that tend to have colonies with multiple queens do. Whether the patterns are important for individual recognition or to identify individuals’ association with particular roles or queens is not yet known. Sheehan and colleagues examined the eye facets and facial patterns of 19 species of Polistes paper wasps. All had some large facets associated with greater visual acuity.

In large Polistes species, maximum eye facet size was the same whether the species sported distinctive faces or not. But among the smaller species, wasps with distinctive facial patterns had much larger maximum facet size than their more nondescript cousins. Sheehan says, “Larger facets in their compound eyes mean better vision, but we found that as these wasps get smaller, they have larger than expected eyes. This demonstrates that they evolved improved acuity relative to size in order to discriminate among different individuals in the colony.”

Selection seems to have been important in small wasps but not in large ones. Sheehan and Tibbetts believe that selection reveals itself in the smaller wasps because their small body size constrains the resolution attainable with their tiny eye facets. This principle was shown in a 1997 study in which researchers found that the angle between the ommatidia—the facet-visual receptor units in compound eyes—limits the spatial resolution possible.2 Smaller eyes require larger angles and limit visual acuity more significantly. (Big-eyed dragonflies have tiny angles and great visual acuity.) The “burden” of this geometry in small insects can be compensated for by the larger facets.

“Visual signalling should be relatively more challenging for smaller species because space for signal display and visual resolution are constrained by body size” Sheehan and Tibbetts write. “Therefore, we predict that smaller species will evolve proportionally larger facets in their acute zones than larger species.”1

Does this prediction hinge on Darwinian evolution?

Since this is exactly what they found—that the larger facet with more acute vision was present in small wasps with distinctive faces but not in those without such individuality—the researchers believe they have discovered something about how eye anatomy and individual facial distinctions co-evolve. However, does this prediction hinge on Darwinian evolution? Does the usefulness of these paired features demonstrate that some invertebrate ancestor evolved the genetic information to build compound eyes and then to build some special large facets when circumstances required? Must evolution—which can provide no evidence that complex life forms and increasingly complex anatomical structures ever evolved—now find a way to accommodate the non-survival social needs of insects to its selective motivations?

The researchers write, “Relatively larger facets within the eye’s acute zone improve resolution of small images, such as wasp facial signals.”1 This is a great design, but nothing about this discovery has anything to do with eye evolution. God created genetic information for each original kind of animal—including each kind of invertebrate—and designed them to reproduce and vary within their created kinds. Our great Creator is a great Designer, and His knowledge of optical engineering is unsurpassed. The marvelous eye design, which provides some extra-large facets for small painted-faced social wasps is a detail that points to the greatness of our God and His care for even the smallest of His creatures’ needs.