The small invertebrate Fuxianhuia protensa had no need to sing, like the scarecrow in the The Wizard of Oz, “If I Only Had a Brain.” A well-preserved specimen of the 3-inch arthropod recovered from China’s Chengjiang Cambrian deposits in Yunnan province, conventionally dated at 520 million years, shows the species had a “fairly sophisticated brain” remarkably similar to modern insects. A multinational team, reporting in Nature, suggests the discovery has implications for the earliest evolutionary history of insects. 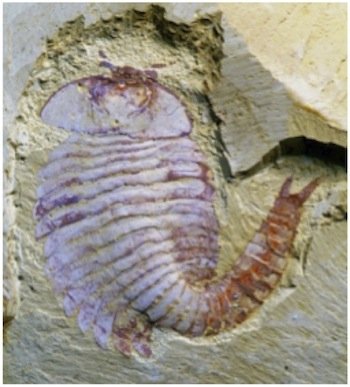 This specimen of Fuxianhuia protensa has a well-preserved body showing the head, a large thorax, and the abdomen (which is the thinner “tail-like” portion on the lower right in this view). The eyes and eye stalks are visible at the top of the head, and the antennae appear just above them. The brain is better seen in the specimen pictured below. Image credit Xiaoya Ma, from www.nature.com. 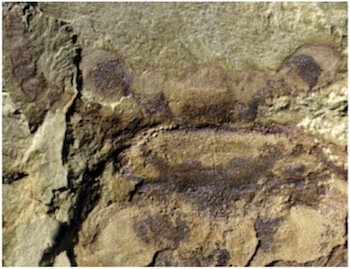 The darker central section seen on this specimen of Fuxianhuia protensa is the brain. Protruding from it on each side are peripheral nerve tracts and, more superiorly, the optic tracts. At the top, the eyes on their stalks are visible as well as the antennae. The eye stalks appear to contain remnants of the optic nerve fibers. Image credit Nicholas Strausfeld, from www.huffingtonpost.com 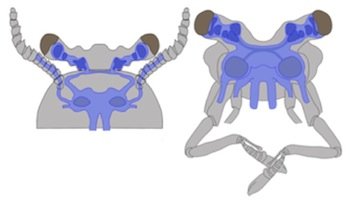 The sketch on the left is a diagram of Fuxianhuia protensa’s brain and neural tissue. Branching from the centrally located brain (from top to bottom on each side) are neural tracts to the eyes, to the antennae, and to some other part of the body. The dark material in the eye stalks represents remnants of neural fibers. Besides its similarity to the brains of modern insects, this extinct creature’s brain also resembles the modern land hermit crab’s brain, which is diagrammed on the right. Image credit Nicholas Strausfeld, from www.huffingtonpost.com Interpretative information on all illustrations obtained from the original paper: Xiaoya Ma et al., “Complex brain and optic lobes in an early Cambrian arthropod,” Nature 490:258–262 (11 October 2012) doi:10.1038/nature11495

Based on the connections between the three sections of the brain and the eyes, antennae, and body, the researchers suspect the creature could integrate and utilize sensory data from its environment as modern insects do.

“No one expected such an advanced brain would have evolved so early in the history of multicellular animals,” according to coauthor Nicholas Strausfeld of the University of Arizona’s Center for Insect Science.1 “The rest of the animal is incredibly simple, so it's a big surprise to see a brain that is so advanced, as it were, in such a simple animal.”2

Obviously no one is suggesting the creature could actually think. But based on the connections between the three sections of the brain and the eyes, antennae, and body, the researchers suspect the creature could integrate and utilize sensory data from its environment as modern insects do. Some of the fossils show the eye stalks in a variety of orientations, suggesting they had the mobility to look around.3 The researchers believe well-developed visual connections would have made it a successful predator, naturally selected to survive and thrive early in evolutionary history. A similar species has been found with the remains of trilobites in the gut, lending credence to the idea that the creature ate its fellow invertebrates.

Brain and other soft tissues are not often preserved in arthropod fossils, and the neural material in this case consists of a red-brown pigment stain. Coauthor Gregory Edgecombe of London’s Natural History Museum says, “We recognize it as a brain because its size, outline and position are comparable to those of a small brain in a crustacean such as a glass shrimp.” The three sections of the brain are fused in front of the mouth instead of having only two fused sections as seen in simpler invertebrates.

Some experts have questioned the brainy interpretation of the brown pigment. For instance, Georg Mayer, expert in arthropod neuroanatomy at Germany’s Leipzig University, says, “The preservation of the material is excellent, but the dark stain most likely represents a mixture of remnants of the nervous, muscular and digestive systems.” However, Mayer doesn’t consider the finding of neural complexity in a Cambrian arthropod to be so astounding, saying, “Cambrian arthropods have complex body plans, so why shouldn't they have had complex brains?”

Insects were formerly thought to have evolved from a simpler-brained ancestor like today’s branchiopods, which are less complex crustaceans like water fleas. But evolutionists believe this fossilized evidence of Cambrian neuro-complexity demonstrates insect ancestors had evolved a complex brain half a billion years ago. Instead of being ancestral to modern insects, branchiopods may, the evolutionists suggest, have undergone an evolutionary regression from former complexity in order to reach their modern, simpler form.4

The “Cambrian explosion” refers to the “sudden” appearance of an abundance of complex organisms deep in the fossil record without significant fossil evidence of simpler evolutionary ancestors. Due to the complexity seen in many of these invertebrates, neurological complexity has been used to construct an evolutionary history for invertebrates. However, the rarity of fossilized evidence of neural development has resulted in speculation based on modern animals. As Uppsala University paleobiologist Graham Budd commented, this evident antiquity of complex brain tissue at the time of the Cambrian explosion “‘throws the cat amongst the pigeons’ in terms of previous hypotheses about how brains evolved.”

In reality, by presupposing that complex features must have evolved from simpler ones, evolutionists are overlooking the one answer that makes sense of all the fossil evidence. Much of the fossil record is a record of the order of burial of creatures during the global Flood, and the dates conventionally assigned to the geologic layers are based on unverifiable assumptions in the dating methods. The “Cambrian explosion” makes sense when we realize it represents a massive graveyard of marine invertebrates catastrophically buried early in the Flood. It is no surprise therefore to find Cambrian creatures with characteristics matching the complexity of modern animals. God created all kinds of creatures about 6,000 years ago fully mature and functional. These creatures included both simpler and more complex ones, and they were optimally designed for life without evolutionary predecessors.