How Good Is Good Enough?

Can you tell the difference?

“Mimicry of harmless species pretending to be dangerous ones in order to avoid being eaten is one of the best celebrated examples of the outcome of evolution by natural selection,” says evolutionary biologist Tom Sherratt. But even poor mimics are quite successful. “Good examples of mimicry are highlighted in biology text books, but many mimics are poor and their emergence remains something of a puzzle.”

Natural selection should reward the best. Yet poor mimics effectively avoid predators and reproduce. For example, about a fourth of the 5,600 species of the harmless hoverfly resemble stinging wasps and bees, both in sight and sound. Many are only poor copies, yet bird predators avoid even these.

Hypotheses abound to explain the success of imperfect mimics. The eye-of-the-beholder hypothesis, for instance, suggests predators and people may not see things the same way. The jack-of-all-trades hypothesis suggests imperfect mimics combine features of several noxious neighbors. Another hypothesis “holds that there is little selective benefit in refining resemblance beyond a certain point.”1

Sherratt’s team compared the shapes, sizes, and colors of 38 species of hoverflies to 10 bee and wasp species. They found the imperfect mimics were not composites but merely poor copies. They also had people rate insect photos. From those assessments and studies of bird perception, they determined birds and people view these buzzy beasties the same way. Thus the jack-of-all-trades and eye-of-the-beholder hypotheses both failed to explain hoverflies. 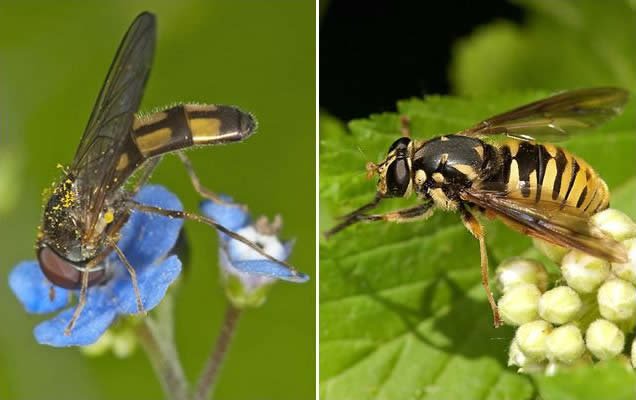 The hoverfly on the left is not as menacing a mimic as the waspish one on the right. Image by Steve Marshall, via Science.2

Surprisingly, the best mimics were the biggest. Smaller species succeed with sloppy copies. “If you are a small hoverfly then birds are not going to be very interested in you,” Sherratt explained. “You are a relatively unprofitable meal and so the selection on mimicry is relatively weak. All you need to do is vaguely look like a wasp, and a bird will be sufficiently deterred to leave you alone because it's just not worth taking the risk if it turned [out] you were a wasp because the benefit is that much smaller. But if you are a nice fat juicy hoverfly, you are a substantial meal to a bird, and in those cases you might experience even stronger selection to resemble something like a wasp or bee and therefore gain protection from predators.”

Apparently bigger hoverflies make more tempting prey and so need a greater degree of protection, while the small flies aren’t so tempting a target and get by with just a little imitation of stingers. For them, sloppy is sufficient. So natural selection seems to work fine after all.

Mimicry provides some of the most exquisite examples of the power of natural selection.

“Mimicry provides some of the most exquisite examples of the power of natural selection,” says Sherratt. “There is a famous saying that ‘Nothing makes sense in biology except in the light of evolution.’ It is just as important to investigate examples of seemingly poor adaptation than sitting back and enjoying the celebrated examples of adaptation we see in textbooks.” (Be sure to read the recent ARJ paper refuting Dobzhansky’s popular mantra.)

Previous Article News to Note, March 24, 2012 Next Article To Teach What Needs to be Taught