The praying mantis is one of the most recognizable and striking members of the insect kingdom. 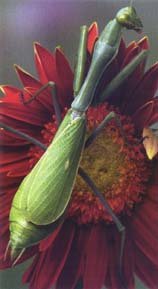 In ancient times, it was believed to have supernatural powers—the word mantis comes from the Greek for “prophet.” Also known as the praying mantid, it has inspired not just awe, but many myths, some of which survive today.

For instance, it is widely believed that it kills only “harmful” insects, but this is not so. The mantis does not discriminate between, for example, honey bees and garden pests.

There are about 1,800 mantis species in the world. Two species found widely in the USA are the imported Chinese mantis 8-13 cm (3-5 inches) long and the native Carolina mantis, about 5 cm (2 inches) long. Scientists disagree about how to classify these insects of the family Mantidae. Some group them with grasshoppers in the order Dictyoptera. Others put them in an order (group) of their ownóMantodea.

Evolutionists claim mantises evolved from the same ancestor as the cockroach, but that’s getting into the realm of belief, not observable and testable evidence.

After the obligatory homage to evolution is made, most scientists are awed by the design of the marvellous mantis. For example, in referring to the lightning speed and strong muscles of the mantis’s forelegs, researchers make comments like: “superbly equipped,” “complex array,”1 and “their raptorial front legs are wonderfully designed.”2

It was believed that the praying mantis was deaf until, in 1986, a sensitive and specialized hearing organ was discovered on the insect’s abdomen. Studies have shown that mantises can dramatically respond to ultrasonic pulses like those used by echolocating bats. It is the only creature known to have one ear, instead of two.

Overall, despite not being averse to devouring “good” insects, they are of more use than harm to people. Their ability to catch prey is fascinating. Scientists have used sophisticated equipment to study this subject, but one can enjoy watching a mantis with the naked eye.

The mantis has compound eyes with hundreds of individual optical elements known as facets. A discussion of its eye alone could easily occupy a separate article. This design gives the mantis a view that is almost “all round” effective, allows both near and far vision, and sensitive detection of motion. Both eyes cooperate to focus on the same target. This allows extremely effective tracking of small and fast objects. When doing so, as the mantis turns its head, it bends tiny hairs at the side of the head, causing a message to be sent to the central nervous system which relays a signal to the forelegs with data about the distance and size of the victim. This allows for precision in deciding the range and time at which to strike. The mantis can easily snatch a passing fly from the air. 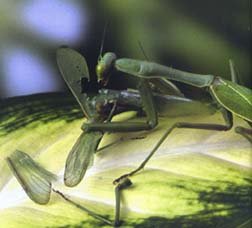 Does a praying mantis bride devour her groom? It does happen, but, among the hundreds of different types of mantises, only rarely in the wild. Even among those mantid species known to exhibit such “sexual cannibalism,” observation suggests that it only happens some 20-30% of the time, and can probably be attributed to hunger in the female.

For nearly 100 years, scientists unquestioningly accepted the myth that mating cannibalism was necessary for the mantis species to survive, with the male being programmed to suicide. Careful scientific research has now shown that this is not so, despite most encyclopedias still repeating this as factual.3

Far from being programmed to sacrifice himself at a mating encounter, a male mantis is capable of mating several times. Also, he does everything he can to avoid being eaten. The male follows an elaborate multistep dance-like ritual that includes a cautious approach that can last a couple of hours. At times, he will freeze his position and may hold a couple of legs suspended in midair. When the female gives him the correct signal, he jumps onto her. If he misses, she cooperates until he gets into the correct mating position. When he finishes (mating can take hours) he disengages his forelegs and suddenly releases the other legs at once to get clear of his mate and make a hasty retreat. Unless the female is starving, there is no “selection benefit” to mating cannibalism.

Eventually the female will deposit a foamy egg case (usually on a twig), while hanging upside down. Inside the egg case, she places up to 400 eggs, covers them with stored sperm, and leaves tiny passages through the sticky mass. The walnut-size incubator then hardens into a warm, protective home for her developing offspring. If the egg case survives predators like squirrels, the babies emerge in summer. 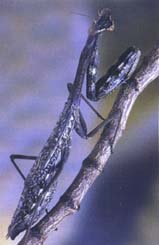 They wiggle out head first, encased in a thin membrane and, like bungee jumpers, dangle from fine silken threads they have secreted. Quickly, the babies (about the size of mosquitoes) shed their covering and begin to do exactly as they are programmed to do. As the weeks pass, they progressively shed their exoskeletons (i.e. their hard outer body layer) until reaching the adult stage with fully developed wings.

The praying mantis is a tidy insect. It will only eat fresh (as in alive) prey. After it eats, the mantis will groom itself like a cat. It meticulously cleans its forelegs then uses them to thoroughly clean its head. Also, it pulls each of its other legs through its mouth.

Some mantises have an extremely elaborate colouring camouflage rivalling that of any animal. Some can blend so well with trees and leaves they are almost impossible to see. They even sway as if being moved by a gentle breeze. The most fantastic are the rose (India) and orchid (Malaysia) mantises. Their colouring is lavender-violet or bright pink with appropriate greens and strategically placed dark shades. They can bend their abdomen into a precise replica of a flower part. Even experts can mistake them for a blossom.

Its brilliant design demonstrates a Creator with unfathomable intelligence and ingenuity.

The praying mantis makes a fascinating and unusual pet. It is feisty and unafraid of humans. Besides being a “personable” insect, its brilliant design demonstrates a Creator with unfathomable intelligence and ingenuity.

Karl Priest, BS, MA, is the founder of the Kanawha Creation Science Group. A mathematics teacher with 29 years experience in education (K-9 level), he has a ministry presenting the follies of evolutionism to all ages, using insects as a teaching tool.