Fig wasp fossil shows up too “soon” in the fossil record.

Every modern species of fig (and there are around 900 of them) is pollinated by its own species of fig wasp. Until recently the evolutionary story of the fig and the fig wasp was an equally marvelous match of coevolving mutualism. Now the identification of an ancient but anatomically modern fig wasp from a quarry1 in Brazil’s Lower Cretaceous Crato Formation suggests—to evolutionists, that is—that the modern fig wasp’s fine-tuned form evolved 65 million years before the fig it requires to reproduce had even appeared on the earthly landscape. 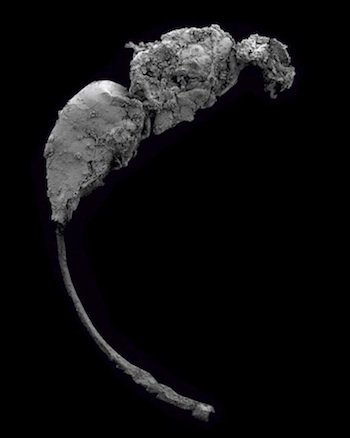 This fig wasp fossil’s ovipositor resembles those of modern fig wasps despite the fact that its presumed age places it on earth 65 million years before there were any figs in which it could lay its eggs. Image by Sam Heads, “Ancient ‘fig wasp’ lived tens of millions of years before figs” 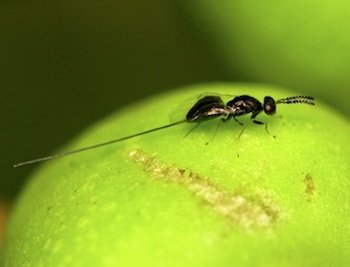 Fig wasp larvae need to develop inside figs. The long ovipositor on this fig wasp enables it to lay eggs inside the flowering body of a fig without actually entering. Other varieties of fig wasps with shorter ovipositors enter to lay eggs and thus pollinate figs, a process mutually beneficial to figs and the insects. Image by Sergio Jansen Gonzalez, “Ancient ‘fig wasp’ lived tens of millions of years before figs”

Before the Brazilian fig wasp from the Crato Formation was found, a fossilized fig wasp dated about 34 million years old, found on the Isle of Wight in 2010, was believed to correspond “closely” to the time the fig plant presumably evolved, tying the two together in a package as neat as the fig wasp’s life cycle fits into the fig itself. Before the Isle of Wight fig wasp find, the “oldest” anatomically modern fig wasps had been found in amber. That amber was assigned a date of 20 million years by evolutionists. “We believe from molecular evidence that fig wasps and fig trees have been evolving together for over 60 million years,” said University of Leeds wasp expert Steven Compton back in 2010 when the Isle of Wight fossil was found. “Now we have fossil confirmation that gets us a bit closer to that date.”2

Well-preserved fossils of fig wasps, including some trapped in amber, show that the well-designed anatomy of fig wasps has not been changing over time. “Although we often think of the world as constantly changing, what this fossil gives us is an example of something remaining unchanged for tens of millions of years—something which in biology we call ‘stasis,’” Compton said. “There were three very well-preserved specimens and we were able to use modern techniques to look at them in detail. What makes this fossil fascinating is not just its age, but that it is so similar to the modern species. This means that the complex relationship that exists today between the fig wasps and their host trees developed more than 34 million years ago and has remained unchanged since then.”3

The new Crato Formation fig wasp, however, wrecks that convenient coevolutionary correspondence and creates a bit of a dilemma.

The newest fig wasp fossil has been named Parviformosus wohlrabeae. Its name honors the investigator that dug it out of a collection of insect fossils from an unknown quarry somewhere in the fossil-rich Crato Formation of northeastern Brazil’s tablelands. Parviformosus wohlrabeae is an anatomically modern non-pollinating fig-associated wasp, though it comes from Lower Cretaceous rock conventionally dated 115 million years old, which is “50-60 million years earlier than current estimates of their [the fig plant’s] origin.”4

“This is a tiny parasitic wasp, it’s the smallest fossil wasp found in this particular deposit and it's the oldest representative of its family,” explains paleoentomologist Sam Heads, coauthor of a paper announcing the discovery in Cretaceous Review. “More importantly, it's possible that this wasp was fig-associated, which is interesting because it’s Early Cretaceous, about 115 to 120 million years old. That’s a good 65 million years or so prior to the first occurrence of figs in the fossil record.”

Like modern fig wasps, the Crato fossil is small—only 5.1 mm long, and much of that length is its lengthy ovipositor. Its body is a mere 3.5 mm long. The long ovipositor enables such a wasp to lay its eggs inside a developing fig, which conceals the male and female flowers. Fig wasp larvae need to develop inside figs, though preferably pollinated ones. In fact, the next generation is even started inside the fig, as the males fertilize their fig-mates and then chew an exit facilitating the ultimate exit of the females—both the pollinating and the non-pollinating varieties—to carry on the life cycle.

Not all fig wasps have such a long ovipositor. The long ovipositor is the feature that identifies Parviformosus wohlrabeae as a non-pollinating variety. Fig wasps lacking this feature are the ones that keep the world in figs—a valuable commodity since ancient times. The tiny female fig wasp is perfectly designed to squeeze through the ostiole of a developing fig—the fig’s syconium, which looks like a fruit but is really an enclosed group of fig flowers. Carrying pollen from the fig in which she developed, the fig wasp deposits her eggs in some of the syconium’s flowers while pollinating others. When her eggs hatch and the larva develop, the males fertilize the females. Later, the mature fertilized females leave the fig, laden with pollen, and find a syconium in which to lay their eggs. Because the fig’s flowers are enclosed in the syconium, they need the fig wasp’s help to get fertilized, and the best edible figs require fertilization in order to ripen into desirable fruit. Thus figs and fig wasps need each other in this mutually beneficial biological arrangement.

A Fig Wasp Out Of Time?

If the fig wasp needs the fig to reproduce, how did it complete its life cycle for 65 million years until the fig could evolve?

So if the fig wasp—which has apparently remained unchanged since its earliest appearance in the fossil record—needs the fig to reproduce, how did it complete its life cycle for 65 million years until the fig could evolve?

“There is no evidence of the existence of figs at this time and the most recent molecular study doesn't place figs that far back,” Heads says. Either the molecular clock predictions about the evolutionary origin of figs is wrong, or perhaps, “something like a fig was around and this wasp was parasitizing whatever that was,” he says. “When you talk about paleontology to people the first thing they think of is dinosaurs. And that's great. Dinosaurs are really exciting, wonderful animals. But for the most part, they're extinct. With insects and other arthropods like spiders and scorpions, they're around still. So we have modern forms to compare our fossil forms to, which is incredibly useful.”

When we consider the history in the Bible, the fossil record of fig wasps makes sense. Only worldview-based unverifiable conclusions about the age of the earth and molecules-to-man evolution produce confusion. God’s eyewitness account makes it clear that He created all kinds of plants on the 3rd day of Creation Week just about 6,000 years ago. Only two days later He created flying creatures.

God created all kinds of plants and animals fully functional and able to reproduce and vary within their created kinds. It would have been no problem for mutually beneficial relationships to develop between plants and pollinators. And while over time variations would have developed within all the plant and animal kinds, particularly those needed to cope with sin’s curse upon the world, it would have been no problem for plants and their pollinating partners to both vary in ways that would be naturally selected to keep mutually beneficial successful variations alive. Likewise the existence of varieties of fig wasp able to lay their eggs within the fig’s flowering body without entering does not represent evolution of any new kind of creature, just a variation equipping it to lay its eggs without providing pollination services to its host plant. None of this demonstrates evolution of new kinds of plants and animals, only variations of the kinds God created.

The Bible also reports the historical occurrence of the global Flood. This catastrophic event explains much of the fossil record, not as a record of the presumed evolution of new forms of life but a record of the catastrophic burial of billions of organisms. Brazil’s Lower Cretaceous Crato Formation, which is a rich source of insect fossils, is thus not a stony record of evolution but of the global Flood. Biblical history enables geologists like Dr. Andrew Snelling of Answers in Genesis to interpret the fossil record in the light of the Bible’s history. Dr. Snelling explains:

As Lower Cretaceous, it was deposited at the last peak of the Flood waters before they retreated, so that makes the formation’s deposition a little before Day 150 of the Flood at the latest. Total Flood inundation globally would of course leave insects with nowhere much to land except on floating debris, but they would still be vulnerable to rapid burial, which of course is the only way they could be preserved as fossils.

We should therefore not be surprised to find that many modern-appearing organisms appear in the fossil record. And since the dates assigned to the fig wasp from the Crato Formation and the dates assigned to figs are based on unverifiable evolutionary assumptions, the conundrum they present is actually nonexistent. The answer is indeed in Genesis. All kinds of plants were created able to reproduce (Genesis 1:11–13; Exodus 20:11) and able to vary within their created kinds. Figs did not have to evolve or to co-evolve with pollinating insects as evolutionists generally assert, as God created plants and pollinators the same week.

Previous Article Evolution of Snake Venom: A New Use for Old Genes? Next Article Comb Jelly: World’s Most Primitive Animal?