About 1.2 billion people worldwide are allergic to dust mites. University of Michigan’s Pavel Klimov and Barry O’Connor believe these free-living, non-parasitic, but allergy-causing arachnids prove that reverse evolution is possible. Tiny dust mites thrive in even the cleanest homes by scavenging bits of keratin from our dead skin cells. A paper published in Systematic Biology, titled “Is Permanent Parasitism Reversible? - Critical Evidence from Early Evolution of House Dust Mites,” concludes that our pesky, diminutive housemates, as well as other free-living mites in bird nests and in mammalian habitats, evolved from parasitic mites. And they say those parasitic skin mites afflicting birds and mammals had themselves evolved from ancestral free-living mites. 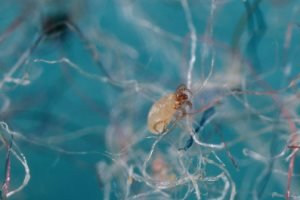 Tiny dust mites that live in our homes subsist on shed skin cells. Species that live in bird nests and mammalian habitats do fine on bits of shed feather and skin debris. Unlike their parasitic relatives, they are harmless except for those allergic to them. They are being hailed as examples of reverse evolution.1

To explore the family history of the common dust mite, O’Connor’s team collected 700 species of mites from all over the world. The mites were all members of the family Pyroglyphidae. They sequenced five nuclear genes from each to construct a phylogenetic tree.

Evolutionary biologists have generally maintained, as O’Connor says, “once a parasite, always a parasite.”2 But O’Connor and Klimov report, “All our analyses conclusively demonstrated that house dust mites have abandoned a parasitic lifestyle, secondarily becoming free-living, and then in several habitats, including human habitations.” Parasitic mites live their whole lives on the bodies of their host birds and mammals. Modern free-living mites in the Pyroglyphidae family live in bird nests, mammalian habitats, and people’s houses, and the researchers presume that ancestral free-living mites did the same. The genomic data is consistent with speciation of free-living mites into these various habitats.

Dust mite lineage is making headlines because the conclusion that parasitism evolved and then unevolved violates Dollo’s law, a commonly held evolutionary principle proposed in 1893 by paleontologist Louis Dollo. According to Dollo, “a complex trait (such as being free living vs. parasitic) cannot re-evolve again in the same form.” 3

“Parasites can quickly evolve highly sophisticated mechanisms for host exploitation and can lose their ability to function away from the host body,” Klimov explains. “They often experience degradation or loss of many genes because their functions are no longer required in a rich environment where hosts provide both living space and nutrients. Many researchers in the field perceive such specialization as evolutionarily irreversible.”

Since evolution is supposed to produce more complex, more specialized creatures, many evolutionists maintain that evolution along one path closes off other possibilities, making it highly improbable that an organism will despecialize and evolve “backwards.”

Since evolution is supposed to produce more complex, more specialized creatures, many evolutionists maintain that evolution along one path closes off other possibilities, making it highly improbable that an organism will despecialize and evolve “backwards.” Parasitic forms, because they develop interdependent relationships with other organisms, are considered more specialized than free-living ancestral mites, so the subsequent loss of their parasitic nature is being widely described as reverse evolution. Klimov says, “We found that very specialized organisms like parasites can drastically become despecialized.”4

O’Connor says that the loss of parasitic specialization in mites is analogous to “regressive evolution” in humans, citing the example of the human appendix. He says, “In our strictly plant-eating relatives, this organ, called the caecum, is quite large and serves as a place where special bacteria break down tough plant fibers. When our ancestors added much more easily digested meat to our diet, a large caecum was no longer needed, so chance mutations that caused it to shrink were no longer a disadvantage.”5

O’Connor, like many evolutionary scientists of the past century and a half, is assuming that Darwin’s conclusion based on the mere presumption that humans evolved from ape-like ancestors explains the existence of appendix. However, we have recently explored the subject of the human appendix and noted that it is not an evolutionary vestige but an important functional component of our immune system. And even though there has long been strong evidence that the appendix was a functional part of the immune system, evolutionary scientists have generally ignored that fact in favor of Darwinian allegiance. (See The Appendix: Useless Vestige or Evolutionary Innovation?, Organ Recital: A Parade of Presumed Design Flaws Devoid of Truth, and Scars of Evolution or of a Sin-Cursed World? to learn more.)

Furthermore, the analogy of mite variations to primate-human evolution is bogus. There is no evolutionary relationship between humans and apes (or hypothetical ape-like ancestors), as they are completely different created kinds, with only humans being created in the image of God. The mites of the Pyroglyphidae family, however, are all mites.

So has anything about this study demonstrated anything outside a creationist understanding of biology? Not at all. All the organisms in question are mites of the same family. They are variations of the same created kind. Whatever their original nature in the good world God created, we can be confident they were not harmful. Living off of the dead skin cells and bits of feather shed by people, animals, and birds requires free-living mites have digestive enzymes to process keratin. Parasitic mites lack those enzymes, but they are still mites. No evolution of more complex or less complex new kinds of organisms has been demonstrated—only variations among mites. And as an aside, it is worth noting that God, in His creative economy, even created an organism able to live off of the dead skin cells sloughed daily from the skin of people and animals.

The digestive enzymes in the waste products of the dust mites that share our homes provoke allergic responses in many people. The researchers believe their study may help develop strategies to help these allergy sufferers. Klimov says, “Our study is an example of how asking a purely academic question may result in broad practical applications. Knowing phylogenetic relationships of house dust mites may provide insights into allergenic properties of their immune-response-triggering proteins and the evolution of genes encoding allergens.” But the potential medical application of their genomic research is not a by-product of evolutionary understanding; it is simply the result of tracing the variations among mites.

Previous Article Intercultural Communication Lesson Demonstrates What Not to Do Next Article News to Note, March 30, 2013