Next time you’re tempted to brush away a spider web, stop to consider the engineering required . . . and the Engineer behind the engineer.

Spiders, like venomous snakes, don’t rank high on most people’s lists of animal favorites. They look creepy, have fangs, and some can stick you with life-threatening consequences. To top it off, they spin icky webs in our lovely homes and drape them across hiking trails at eye level. Eew!

But before you stomp on another spider in repugnance, consider their unique abilities. Like every other creature on earth, spiders showcase the ingenious creativity of their Maker. If you really knew what they can do, your attitude may change from abhorrence to amazement.

Take one common example, the orb weaver spiders (family Araneidae). It’s not the largest spider family (jumping spiders and sheet weavers have more species), but it’s one of the most identifiable. They weave those familiar circular webs that we run across (or into) in forests and gardens.

The true marvel is in the details. You may never desire to cohabit with these creatures, but by the end of this article, you might find yourself filled with admiration for their abilities (provided they keep their distance).

Consider the machinery necessary to produce these webs. Most people know that spider silk is manufactured somewhere on the south side of a spider. But where exactly and how?

On the tip of a spider’s abdomen are usually three pairs of elaborate “spinnerets.” Each spinneret is a tiny conical gadget with a mess of spigots on its end (sometimes over a thousand) that can dispense liquid silk in glue-gun fashion.

The orb web is so common and familiar that we rarely ponder its complexity.

But this is no glue gun. These spinnerets produce silk, and not just one kind of silk. To build an orb web and its other silken products, the spider requires several kinds of thread. Each type must be produced on demand. How is this possible?

Attached to each spinneret are glands that manufacture different versions of the silk protein fibroin. A miniscule pumping system transports the liquid silk from each gland to the spigots. The kind of silk depends on what it’ll be used for. Different spigot designs and glands make threads that vary in thickness, stretchiness, and stickiness. The thickness is controlled by the tiniest of valves before the silk leaves the spigot.

Some glands make threads for the anchor and frame of the web. Other glands make fine, cottony threads to wrap the spider’s prey or eggs. A different set of glands produce the thin, stretchy threads and the glue that makes them sticky (Figure 1). 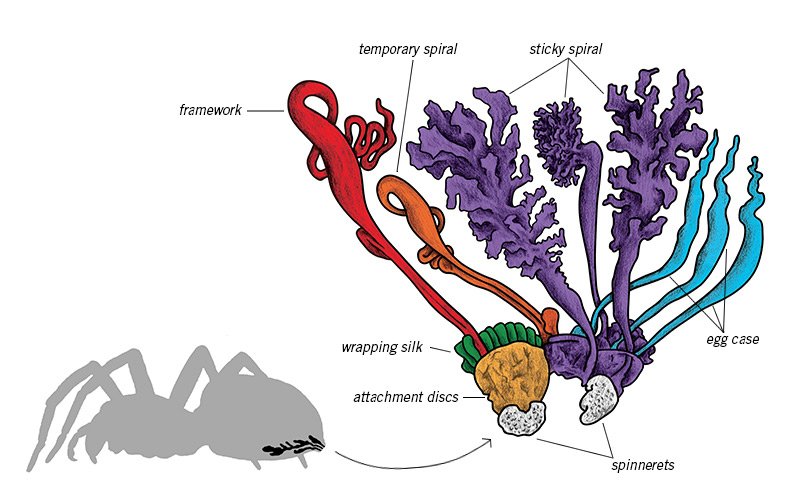 Orb weaver spiders have access to up to seven glands to produce different kinds of silk and glue.

Many people think that the liquid silk solidifies due to contact with air. This is not true. Scientists don’t fully understand the chemistry, but it appears that the pulling of the liquid silk from the spigot aligns the proteins such that more hydrogen bonds form between them, thus turning the liquid instantly into a solid (albeit stretchy and flexible)!

The orb web is so common and familiar that we rarely ponder its complexity or marvel at how the Creator designed behavioral programs to build this amazing structure. These programs orchestrate a sequence of complex maneuvers of the spider’s body, spinnerets, and legs. In most cases the legs must pull out precisely the right kind of thread from the appropriate spinneret at the right time to weave a geometric masterpiece. The whole job takes less than an hour and is finished with mind-boggling dexterity and speed.

There are over 3,000 species in the orb weaver spider family. The overall web design and construction are similar, but the details can differ greatly from species to species.

After spending some time exploring for a suitable site, the spider spins a Y-shaped scaffolding of radial threads. In a complicated series of movements, it then constructs the frame and mooring threads while adding more radial threads. With clear marching orders somehow embedded in its tiny brain by the Master Designer, it moves back and forth from the center to the frame, laying down the remaining radial threads to fill in all the gaps.

Because the frame, mooring, and radial threads will need to support the entire web, as well as the weight of the spider and prey, these threads are thicker, stronger, nonsticky, and less stretchy than the sticky spiral, added later to capture prey. While still spinning the radial threads, the orb spider cross-laces them together at the center to form the hub.

Once the radial threads and hub are completed, a widely spaced, nonsticky auxiliary spiral is spun. This spiral starts from the hub and moves out. This temporary spiral helps stabilize the web while it’s still under construction. It also serves as a literal guideline for the spider as it spins the next, final spiral, called the sticky spiral.

Starting at the outskirts and switching spinnerets, the spider lays down the sticky spiral using the auxiliary spiral as a guide. It consists of an exceedingly thin, stretchy thread, forming a more closely spaced spiral.

“Fine motor skills” is an extreme understatement to describe the spider’s agility as it glues this thread to dozens of radial threads. This master of multitasking even removes the auxiliary spiral as it spools out the sticky spiral.

As it lays the thread, the spider coats it with glue, which separates into tiny, regularly spaced beads. It usually leaves a small gap between the hub and the spiral, called the free zone. This allows the spider to quickly switch sides if the prey gets stuck on the opposite side of the web.

In all of its movements, the spider, like an eight-legged ballerina, tiptoes on a mesh of tightropes, avoiding the sticky ones using the nonsticky hub, radial, and frame threads as its primary walkways.

Once the web is completed, the spider usually sits tight on the hub or near the edge and waits for some hapless insect to blunder into the web. Its legs, equipped with many sense receptors, rest strategically on the radial threads. They are quick to detect the intensity and direction of the vibrations from any struggling prey.

Countless other wonders of God’s design are just as amazing in the orb weaver spider family. And this is just one family of spiders. If we can get past the ingrained, “yuck, icky spider” response, a treasure trove of the Creator’s handiwork awaits discovery.

Dr. Gordon Wilson, Senior Fellow of Natural History at New Saint Andrews College, earned his PhD from George Mason University in Environmental Science and Public Policy. He holds a master of science degree in entomology from the University of Idaho.

Orb weaver spiders need many different threads to assemble webs and other tasks. They nimbly switch from thread to thread in a complex, orchestrated sequence of maneuvers.