Photo by Vengolis, via Wikimedia Commons.

Fossil Millipede “As Big as a Car” Discovered

A fossilized millipede exoskeleton was found in England from a creature estimated to be nine feet long—a reminder of the size of animals in the pre-flood world. 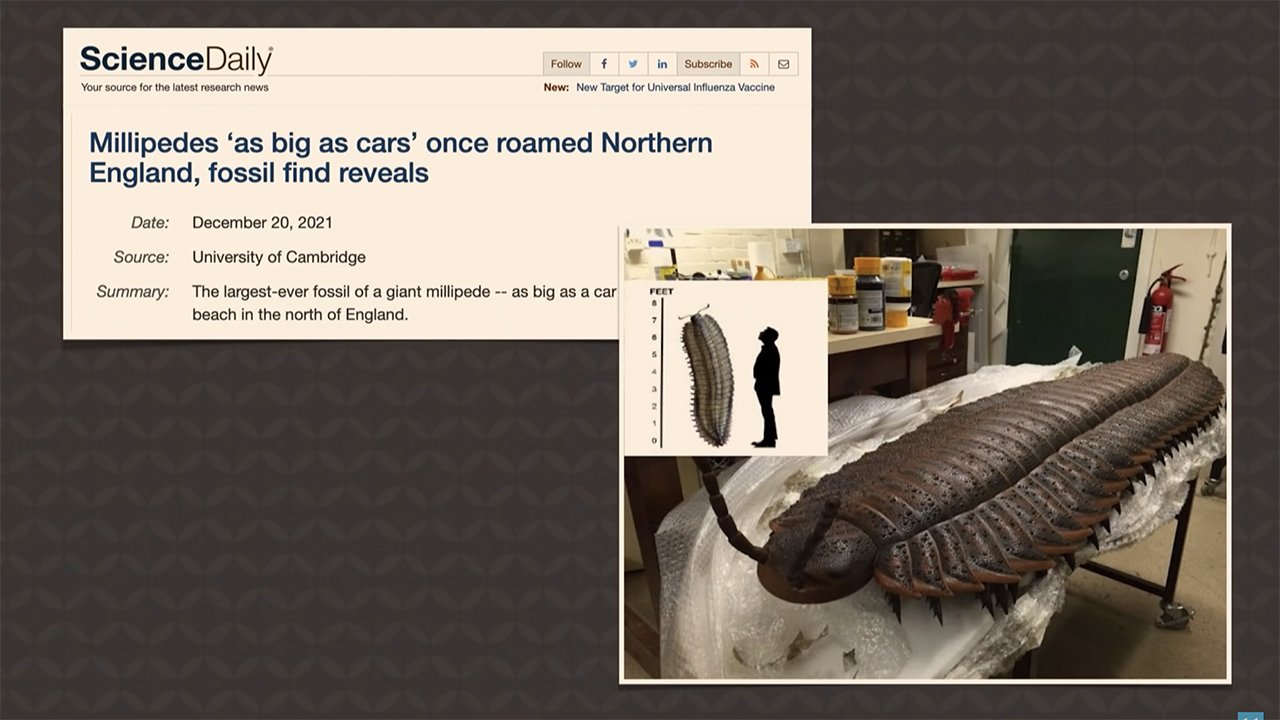 Many people aren’t really fond of creepy crawlies . . . especially the big ones, like tarantulas. But what if you lived before the flood of Noah’s day when certain insects grew to enormous sizes? You might not even mind a “tiny” tarantula compared to a millipede the length of a car! What am I referring to?

Well, scientists recently discovered fossilized body segments in a fossil bed in northern England of a millipede that they estimate was just shy of 9 feet (2.7 meters) long and weighed about 110 pounds (50 kilograms). As with many fossils, they didn’t find the entire creature, just what was “likely a moulted segment of the Arthropleura’s exoskeleton.” They believed it “filled with sand, preserving it for hundreds of millions of years.” Of course, that timing is pure speculation—exoskeletons are rarely preserved in the present, and certainly not through slow and gradual processes such as that! It takes a catastrophe (like Noah’s Flood) to rapidly bury creatures, or their molted body parts, because (thankfully!) God has designed a complex system that decomposes dead plants and animals very rapidly.

Starting with a biblical worldview, we know this creature isn’t a relic of a distant eon when massive insects dominated the forest floor. It’s a creature that lived in the pre-flood world . . .

Starting with a biblical worldview, we know this creature isn’t a relic of a distant eon when massive insects dominated the forest floor. It’s a creature that lived in the pre-flood world, created on day six of creation week, along with the other land creatures. Its molted exoskeleton was rapidly buried in rising floodwaters that preserved it for a few thousand years until a chunk of sandstone smashed open the rock it was preserved in. But why was this insect so big?

Well, we don’t know for sure, but it’s likely that giganticism was part of the variety God built into various kinds that he made. He put an incredible amount of variety (genetic diversity) into all of the kinds that he made, so organisms can adapt and thrive in an ever-changing, post-fall world. Huge sizes may have just been part of that. Of course, we also don’t know for sure what the environment was like before the flood, and a warmer climate or shorter winter seasons, among other things, may have had a substantial impact on how big some creatures could get.

You can learn more in this article: “Giant Bugs: Why They Once Roamed the Earth.”

This item was discussed yesterday on Answers News with cohosts Dr. Georgia Purdom, Patricia Engler, and Bryan Osborne. Answers News is our twice-weekly news program filmed live before a studio audience and broadcast on my Facebook page and the Answers in Genesis Facebook page. We also covered the following topics:

Watch the entire episode of Answers News for January 5, 2022.