Okay, one look at a scorpion and the “creep factor” takes over. Scorpions appear armed to scare and kill. Are we supposed to be afraid, or is it just our imagination?

Of all arthropods1 scorpions seem to rank very high on the creep scale. With their large pincers on one end, a long, curving, stinging tail on the other, their intimidating ninja pose, and their frightening name, it’s no wonder they strike fear. But most scorpions are no more dangerous than a bee or wasp. Although they have a deadly reputation, only about 25 out of more than 1,500 scorpion species alive today can deliver a fatal sting to humans.

It may seem unthinkable that scorpions, divinely designed predators, could have once lived on vegetation, but in Genesis 1:30 God says, “Everything that creeps on the earth, in which there is life, I have given every green herb for food.”

A world where animals didn’t eat other animals is almost impossible to imagine.

A world where animals didn’t eat other animals is almost impossible to imagine. Though we don’t know how everything worked in a perfect world, we do know that scorpions didn’t harm human beings. That came after Adam’s sin brought death and suffering into the world.

Until recent years, all spiders were also thought to be predators. Then researchers found a plant-eating spider in Central America. If a spider can live on vegetation, then why not a scorpion?

Even the scorpion's stinger may have been a post-Fall development (genetically but not physically present before the Fall) or used in non-violent ways during courtship. Genetic instructions for the changes necessary to transform scorpions into predators after the Fall could have been present at the moment of creation. 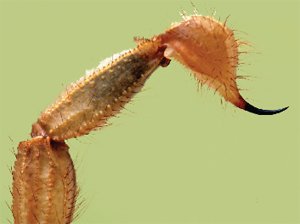 This stinger belongs to the largest scorpion in North America, the giant hairy scorpion (Hadrurus arizonensis), which can grow to half a foot (14 cm).

You can’t ponder the scorpion without noticing all its magnificent weaponry. The most obvious items in its arsenal are the bulbous stinger mounted on the tip of the abdomen and the arm-like pinching pedipalps. The pedipalps seize prey, which mostly consists of insects (bigger scorpions can take on small rodents and reptiles). If the prey is larger and likely to fight back, the scorpion can whip its tail over its head and sting. Muscles surrounding the dual venom glands inside the stinger then contract to squeeze the venom out of a hole near the tip. This neurotoxic venom quickly kills or immobilizes the prey. But there are more subtleties to the stinger. The sophistication of venom delivery is marvelously designed for a fallen world. Certain scorpions employ two types of venom—a less toxic pre-venom that’s clear, and a more toxic venom that is opaque. The scorpion can size up its prey and inject the venom that is the best for the job.

Once the prey is sufficiently subdued, the pedipalps hand it over to the chelicerae. These mouthparts tear and crunch up food. Not too long ago, while looking for reptiles, I flipped over a rock and found a little scorpion in the middle of a termite colony, stuffing its chelicerae with termites. But it didn’t bother stinging these little six-legged Twinkies—they were small enough to handle without using venom, which takes a lot of energy to produce.

A scorpion can drink only liquid food, so it must mix the mashed munchies with digestive juices, which it secretes into the pre-oral cavity. Once the food turns into “soup,” it can be swallowed. Any solid bits are strained out by bristles in the pre-oral cavity, the scorpion’s “fuel filter.” This liquid diet concentrates nutrients and saves the energy of digesting food internally.

A Complete Array of Sensors 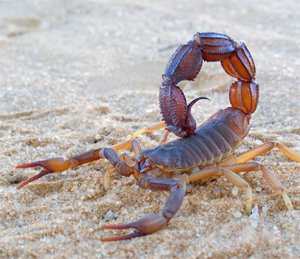 Scorpions are not just desert creatures like this species from the Kalahari desert in southern Africa. They are found in virtually all types of environments and on every continent except Antarctica.

Not only did God design the scorpion’s weaponry to hunt prey and defend against attack, He also equipped it to keenly sense its surroundings. With two very sensitive eyes on top of its cephalothorax and two to five more pairs of eyes positioned like headlights on the side near the front, this nocturnal hunter is well equipped to spot other animals in the dim night light. On the underside of the scorpion’s abdomen is a pair of curious comb-like pectines that brush the ground. They seem to sense ground texture as well as vibrations from the movements of nearby creatures. These and other sense organs (mostly bristles on its legs) enable the scorpion to be ready for action should food or potential threats enter its territory.

The scorpion is a vivid reminder of the Curse and the deadly consequences of our sin against a holy and just God. Adam’s one sin in the Garden of Eden brought all this pain and suffering into the world. But because of God’s love, He sent His Son, Jesus Christ, to experience death’s sting in our place and redeem sinful mankind (Acts 2:22–24; John 3:16). Someday God will redeem His fallen creation, as well. Then He will take away all predator-prey relationships— the poison and the pain, the fangs and the fears—and the scorpion will be restored to its original diet (Isaiah 11:6–9).

PHYLUM: Arthropoda
CLASS: Arachnida
ORDER: Scorpiones
FAMILY: between 13 and 20 families (depends on the authority)
SPECIES: over 1,500 species are currently known
SIZE: 0.35–8.3 in (9 mm–21 cm)
DIET: Mostly insects, but sometimes small rodents and reptiles, and other scorpions.
HABITAT: Scorpions live on every continent except Antarctica, and in virtually all types of environments, from deserts to rainforests, beaches to mountains over 12,000 feet (3,700 m) high.

Dr. Gordon Wilson, Senior Fellow of Natural History at New Saint Andrews College, earned his PhD from George Mason University in environmental science and public policy. He holds a master of science degree in entomology from the University of Idaho.