Move over, wranglers of the South American plains. You’ve met your match. These adept spiders can weave their own ropes and lasso flying moths. 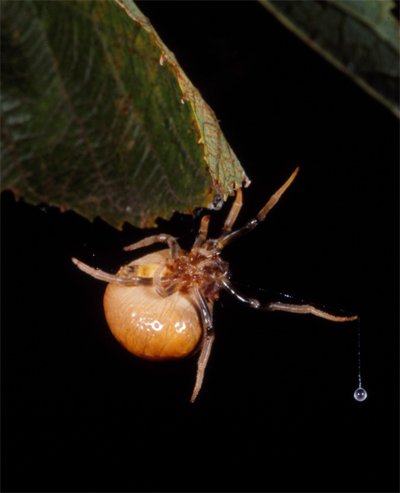 The bolas spider uses a droplet of strong adhesive on the end of a strand of silk to snag moths from midair.

Spiders, with their silk-producing spinnerets and mastery of web design, are some of the most fascinating creatures on the planet, worthy of our study and delight. Unfortunately, they are more often terminated with extreme prejudice and their spectacular designs brushed away.

All of the more than 40,000 known species of spiders spin silk, and all but one are predators (see “Did you know . . .” below). Consequently, they employ their sophisticated web-spinning equipment, anatomy, and behavior to capture and consume food. However, we know that before the Fall, all creatures—even spiders—ate plants (Genesis 1:30). We also know that spiders were created with other “creeping things” on Day Six. God didn’t make them after the Fall as part of the Curse. Before the Fall spiders may have used their fangs and webs in ways we may never know until glory.

Now we get to appreciate their varied abilities for other reasons. Consider just one group, the bolas spiders.

Among all the awe-inspiring spiders in the world, this group’s unique skill really ropes us in. At first glance, nothing stands out to suggest a special arachnid. God designed them to be inconspicuous. For one thing they aren’t very big. The females are roughly half an inch (1.2 cm) across, while the males are pipsqueaks, measuring only about a sixteenth of an inch (2 mm). They’re also not flashy. Even on the arachnid beauty scale, they don’t rank high for looks. They have bulbous, lumpy abdomens, and some species even look like bird droppings. They appropriately hang out during the day on the upper surfaces of leaves. Others, which resemble snail shells, hang out on the underside of the leaves. This defensive mimicry provides some protection from predators, which are not usually drawn to droppings or hard-shelled snacks.

But the bolas spider makes up for its unimpressive looks with a very impressive skill. Many of us remember learning about Argentinian gauchos in geography class. They were South American cowboys who hurled bolas from horseback to bring down cattle or large game. The bolas (or bola) is sort of like a lasso, but it has two or three cords with rocks or weighty balls tethered on the end of each. The gauchos would swing the balls in a circle like a lasso, then release them, aiming at the animal’s legs. When the bola hit, the cords would wind around the legs and lash them together to stop the animal in its tracks.

The bolas spider is the arthropod version of the gaucho. Rather than spinning a web and waiting for a hapless insect to blunder into it, the bolas spider takes a more active approach. This eight-legged caballero makes biological bolas and brandishes them with dazzling skill and speed to rival the best gaucho on the South American plain.

While it hangs suspended from a horizontal strand, the bolas spider fashions a short, strong thread of silk from its spinneret. On the end it puts a glob of glue. At the core of the glob is a thicker, sticky substance, which is firmly anchored to the thread. The outer part of the glob is more fluid so it can quickly penetrate the dusty scales and stick to the body of an unsuspecting moth.

Details vary among the different types of bolas spiders, but all share the same basic technique. If you can imagine snagging a low-flying bird with a glue-coated softball hooked to the end of a ten-foot bungee cord, you have the general idea.

Each species of bolas spider also secretes a chemical that mimics the smell of a female moth’s sex pheromone. The scent draws in male moths of that particular species. The moth will begin to fly around the spider, intent on finding the source of the lovely perfume. Skillfully, the spider holds the thread with the tip of her leg and begins to whirl her weapon. When she senses a moth in range, she flings the bola at it . . . just like a gaucho. If her bola smacks the moth, she reels it in, bites it, and wraps it in silk to keep her food fresh. She may devour her moth meal immediately, but often she prepares another bola first.

Rather than spinning a web and waiting for a hapless insect to blunder into it, the bolas spider takes a more active approach. This eight-legged caballero makes biological bolas and brandishes them with dazzling skill and speed to rival the best gaucho on the South American plain.

Evolutionists say that all life came from a single ancestor, but we know that God created the various kinds of land animals on a single day of Creation Week (Genesis 1:24–25). Even if the first ancestors of the bolas spiders didn’t make bolas (because they weren’t predators yet), they were at least endowed by God at Creation with the programming for building bolas and adding scents. The Fall may have triggered the expression of those abilities so the spider could make a living in a fallen world—and remind humans about the terror of the Lord, who is both Creator and Judge. One thing remains perfectly clear. No random genetic changes could ever cause an orb-weaving spider to evolve into one that could construct and skillfully wield a bola.

Dr. Gordon Wilson, Senior Fellow of Natural History at New Saint Andrews College, earned his PhD from George Mason University in Environmental Science and Public Policy. He holds an M.S. degree in Entomology from the University of Idaho.
Next Article Rainbow Mountains