Emperor Penguins: Equipped for Life at the “Bottom” of the World

Life as an Emperor Penguin

The stately bird with tuxedo-patterned feathers is on a mission. She glides through the Antarctic waters after catching her last bellyful of fish. She shoots out of the water, leaping up to the ice pack above. Without a calendar to count the days, somehow she knows the time has come to return.

The journey will not be easy. Up to 124 miles (200 km) of ice may lie between her and her family, which is depending on her back at the rookery where her colony lives. While she can fly through the water at 15 miles per hour,1 her wings are not designed to fly through the air. Her webbed feet waddle the icy miles back home. Sometimes, she can speed up by sliding along on her belly.

Back at the rookery, her mate waits along with the rest of the males. A couple months ago in June, she left him there to guard the single egg she laid and rolled atop his feet, a difficult and dangerous transfer. The life inside the egg would die within mere minutes of contact with the freezing ice. On top of the father’s feet and underneath a fold of skin, the egg is incubated at 95 degrees Fahrenheit (35 degrees C), even through subzero temperatures outside. When blizzards blow, the group works together to stay alive. Huddling tightly together, penguins take turns standing on the outside of the pack and then shuffling to the center to warm up. The male stands with the egg on his feet for two brutal winter months. Since the male cannot eat without abandoning the egg, he loses nearly half of his body weight during this time.

At just the right time, often on the precise day the eggs are hatching, the females return. The ruckus seems confusing as thousands of birds call to one another. But in the middle of the uproar, each female can find her mate because each bird has a unique call. She has stored food in her stomach and regurgitates this partially-digested food to feed the hungry chick. Leaving the chicks in the care of the females, the males head to the ocean for food. The parents will then take turns filling up and bringing back food for the chicks.

It takes five months for the chicks to grow up. When their gray down feathers molt and are replaced by juvenile feathers, the chicks are ready for ocean life. With the austral spring approaching, the ice pack has been melting, making the journey to the sea shorter. The parents don’t need to teach their chicks how to swim since penguins are designed for water life. Penguins seem to enjoy the water: they even take turns sliding down the ice on their bellies for a splash into the sea and then hop out for another go.2 Despite the extreme temperatures they endure, the hardy penguins thrive in the Antarctic waters. 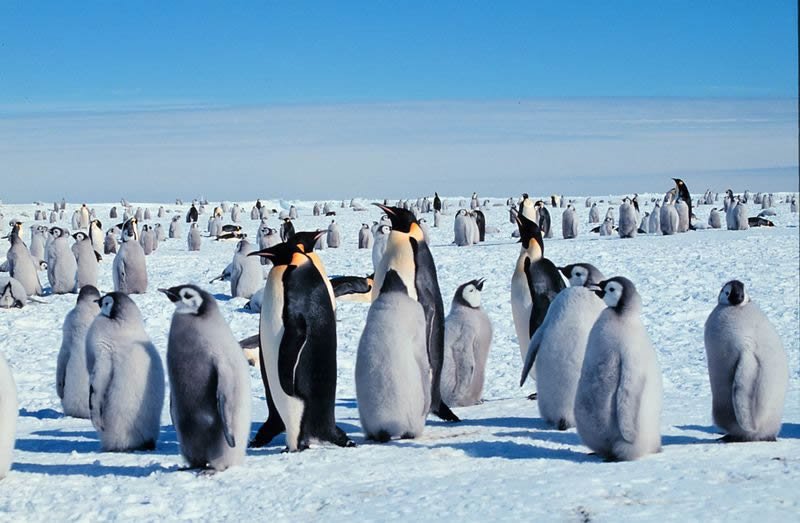 Image by Kobac, via Wikimedia Commons.

Although God created the penguin kind on Day Five of the Creation Week (Genesis 1:20–23), the emperor penguin species likely did not exist until a later time. The world was perfect at that time, so penguins may not have had to endure freezing temperatures. In God’s wise and caring foreknowledge, He equipped the original penguin kind with the genetic information necessary for penguins as hardy as the emperor penguin to exist today.

After the Flood, the penguins that came off the Ark multiplied, and different species within the kind resulted from a variety of factors like genetics and the environment. This is not molecules-to-man evolution because genetic information was lost or altered, not gained, and the new species were all within the penguin kind—they didn’t become other kinds of birds or animals.

Evolutionists, on the other hand, assume penguins came from birds of flight that originally evolved from dinosaurs. However, the fossil record reveals no evidence of their claim. Even though a variety of penguin fossils have been discovered, they all have distinct penguin features and were flightless birds.

The popular documentary March of the Penguins was applauded by some creationists because it shows the remarkable design of the penguins instead of focusing on evolution. Some conservatives even pointed to the penguin as an example of moral values—such as being monogamous and pro-life. Yet we must be careful to never let the animal kingdom be humanity’s basis for morality. Indeed, some animals show behavior that humans would call polygamous or cannibalistic.

Mankind is distinct from the animals, being made in the image of God (Genesis 1:26). God has given man a conscience to convict us of right and wrong (Romans 2:15). He has given us His Word, which is truth (Psalm 119:160). And He has given us His Son who lived righteously and died for our sins: “Who Himself bore our sins in His body on the tree, that we might die to sin live to righteousness. By his wounds you have been healed” (1 Peter 2:24). Those who turn from their sins and trust Christ will receive God’s forgiveness and eternal life.

Previous Article Blue Whale: The Mammoth of the Sea Next Article Gecko: Designed to Climb