Blue Whale: The Mammoth of the Sea

Life as a Blue Whale

What is the largest animal of all time—even larger than the most massive dinosaurs? The answer is the blue whale. These giants average about 70 feet in length, although some were reportedly more than 100 feet long during the whaling era. That’s about the length of three school buses! While some dinosaurs were longer from nose to tail, the blue whale still tops them in sheer bulk. Blues weigh around 200,000 pounds (100 tons), while the largest land mammal today is the African bull elephant, which may weigh eight tons. If the blue whale lived on land, its skeleton would collapse under its weight.1 But the blue whale’s home is the vast ocean expanse, where the water’s buoyant force supports its bulk.

Since whales are air-breathing mammals, humans may encounter the enormous blue when it surfaces to breathe through the two blowholes on its back. It breathes out an impressive spout that shoots an air and water spray 20 to 30 feet high. Between dives, the blue whale may surface for air every 10 to 30 minutes.

In the water, the blue whale’s long, streamlined body swims efficiently at speeds of up to 30 miles per hour. In comparison, humans can only swim up to four or five miles per hour. The speed and size of the blue whale helps it cruise the hundreds of miles between patches of food. Along the way, the whale is sustained by its substantial fat stores, called blubber.

The primary food source of the mammoth blue whale is tiny, shrimp-like krill. The blue whale lunges to gulp swimming pool quantities of water, expanding the bottom pleats of its mouth—the ventral pouch—like a giant water balloon. When lunging, the water forces the lower jaw to open nearly 90 degrees. Scientists wondered how the whale could manage to close its jaw against the force of the water until they discovered a structure called the frontomandibular stay that causes resistance and helps the jaw snap shut.

Once the whale has its mouth shut around thousands of gallons of seawater, it strains out the water through its baleen. Baleen is made of keratin, the same substance that helps make up people’s fingernails and hair. It hangs in tough, bristled plates, ranging from one and a half feet in the back sides of the mouth to three feet up front. The water flows out, but the baleen traps the krill. During the peak summer season, the whale may encircle a krill patch, swallowing about 40 million krill or four tons of food a day.

Blues communicate to one another at sounds often too low for humans to hear without equipment. Yet the sound is one of the loudest of any in the animal kingdom.2 Researchers have yet to find out how such vocalizations are made, since they have not found any sound-making organ or resonating structure.3 Much remains to be discovered about the colossal blue whale. 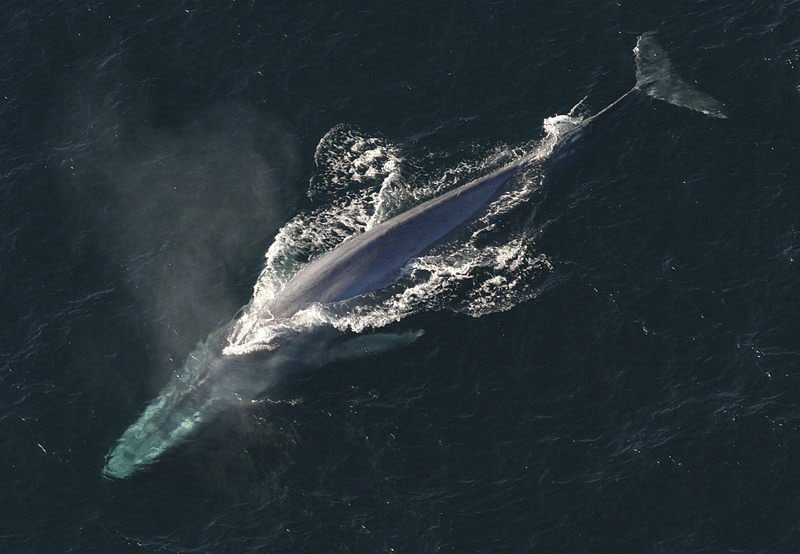 If you consult many science textbooks, you’ll read a whale of a tale about how whales supposedly evolved. Evolutionists believe some land animals—perhaps in search of a better source of food—returned to the sea as air-breathing marine mammals like blue whales.

Despite claims that the fossil record shows the missing links between land mammals and marine mammals, the transitional forms are far from convincing or complete. Rather, whales appear in the fossil record abruptly with all the complex systems in place to thrive in the sea. Transitional forms provide no evidence for how the whale “evolved” complex systems like the ear designed for underwater hearing and pressure, tail that moves vertically, blubber and countercurrent heat exchangers to keep warm,4 respiratory system able to withstand high pressure and long periods underwater, and the ability to birth and nurse underwater. Furthermore, baleen whales like blues are the only animals known to strain their food with baleen.

Complex structures like baleen cannot form by random mutation. Natural selection is also inadequate because adaptation involves a change of traits that already exist. Therefore, change happens only within a kind—not a change from one kind to another, like a land animal to a whale.

In contrast to the evolutionary assumption of land mammals evolving into marine mammals, the biblical account says sea creatures like whales were created on Day Five of Creation Week (Genesis 1:20–23), a whole day before the land animals were created. Whales display divine design.

O Lord, how manifold are your works!
In wisdom you have made them all;
the earth is full of your creatures.

Previous Article Honeybees: One of God’s Sweetest Designs Next Article Emperor Penguins: Equipped for Life at the “Bottom” of the World