So where did penguins come from? The Bible tells us in Genesis 1:20–22 that God created all sea creatures and birds on Day 5 of the Creation Week.

During his daring trip around the Cape of Good Hope in 1497–98, Vasco da Gama saw a strange-looking sight—birds leaping out of the ocean like porpoises. He and his crew were the first Europeans to report these acrobats of the sea, known as penguins.

Specimens were not easy to obtain for scientific study, however. It took over 250 years before Linnaeus described the jackass or African penguin (Spheniscus demersus), a common species in South African waters. It was named after the jackass because it actually brays like an angry donkey.

The Macaroni penguin is the most numerous of all the world’s penguins. Photo courtesy of Robert Angell

After years of exploration, 17 species were discovered, quite similar in structure and coloration and belonging to the same family (Spheniscidae). Penguins are so different from other birds, in fact, that they are the only family in their order, the Sphenisciformes.

Smallest is the little blue or fairy penguin (Eudyptula minor), only 16 inches (40 cm) tall and weighing 2 pounds (1 kg). The largest is the emperor penguin (Aptenodytes forsteri), star of the movie March of the Penguins, which stands almost 4 feet (1.2 m) tall and weighs up to 100 pounds (45 kg).1

Penguins have a remarkable capacity to regulate their body temperature despite the extreme external temperatures. Their unique overlapping feathers are highly specialized, providing good insulation, waterproofing, and wind resistance. The peculiar structure of the feathers provides extra thickness, and the complex network of blood vessels in their wings also helps the birds thermoregulate.2

Emperors, Kings, and All the Others 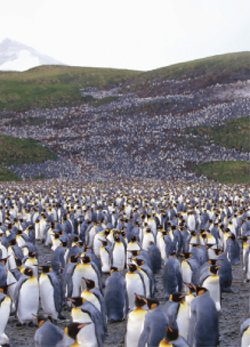 The two largest species of penguins, emperor and king, lay a single egg. All other fifteen species lay two eggs, although in many cases they raise only one chick. After the chicks are able to walk, they congregate in “daycare centers” called crèches, while their parents go to sea to forage. Penguin colonies are very noisy, but adults have no trouble finding their own young. Del Hoyo explains: “Calls are individually separable, enabling partners to recognize each other and also their chick with complete certainty in the midst of a dense colony.”*

Penguins even have a unique molting pattern, retaining their old feathers until the new ones grow in.2 Their insulation and waterproofing are compromised during this time, so they must remain on land until their once-a-year molt is completed, lasting between 13 and 34 days, depending on the species.2

Penguins have three kinds of movement in water—surface swimming, porpoising, and underwater “flying.” Surface swimming is the least efficient. When swimming on the surface, the head is often the only part that is visible. The markings on the head facilitate sight recognition. Each species has its own distinctive pattern—a white patch on the crown, a brightly colored bill, or a crest. Since air resistance is less than water, porpoising out of the water at intervals increases the efficiency of a penguin’s swimming and possibly enables it to escape predators. But the penguin is most efficient when swimming underwater, which is really a form of underwater “flying,” accomplished with its unique wings.

Indeed, the most striking thing about penguins is their wings, “which are unlike the wings of any other bird. The difference between them and the wings of other birds is that they are designed to fly through the water. The elbow and wrist joints are fused and immobile, and the movement of the shoulder is limited, so that the bird must hang its wings by its sides rather than folding them over its back when it is at rest.” 3

Penguins have some look-alikes in the Northern Hemisphere—the puffins (left) and murres (right), which have similar black-and-white feathers and waddle. However, puffins and murres fly and are in a different family (Alcidae). In addition, their DNA implies that they are not related.

The unique structural design of their wing bones enables penguins to be masters of underwater “flight.” In addition, their wing muscles are among the largest and strongest of any bird. Indeed, an adult emperor penguin is quite capable of breaking human leg bones with a single blow of its wing.4

Tiny air bubbles cling to their feathers as they dive, significantly reducing the water’s drag on their bodies, making movement through the water energy efficient. Even their body shape contributes to this energy efficiency. Polar researcher Rudolf Bannasch stated that the penguin’s body is a natural torpedo, economical on fuel.5

The unique characteristics we observe in penguins today—feather structure, form of molting, wing structure, and body shape—have no equal in the avian world. But have they always been this way? Evolutionary scientists tell us, “The penguins are descended from ancestors which had the power of flight, but their evolutionary energy has been concentrated on adaptation to an amphibious lifestyle.”6 To examine the plausibility of this statement, we need to examine the fossil record.

The first remains of a fossil penguin were found in New Zealand in 1859, and T. H. Huxley published the finding as Palaeeudyptes antarcticus. Del Hoyo comments, “This bone . . . shows the fusion of the tarsus and the metatarsus in a way peculiar to penguins,”6 indicating that penguins have not changed substantially over the millennia. 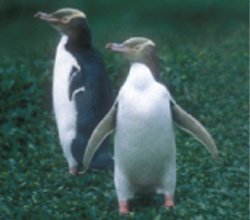 All penguins nest in colonies except for the yellow-eyed penguin (above), which breeds in isolated pairs. Four penguin species typically nest underground, while others build nests on the bare ground, variously constructed of pebbles, plant matter, and feathers. One medium-sized nest of a gentoo penguin was composed of about 1,700 pebbles and 70 old tail feathers.*

There are 21 genera and 32 species of extinct penguins now known to science. The fossils of penguins are found as low as the Eocene rocks, which creationist paleontologists believe were laid down after birds and land animals left the Ark and multiplied on the earth. From this evidence scientists conclude, “The late Eocene penguins were already completely incapable of aerial flight, fully adapted to aquatic flight and to upright, bipedal progression on land.” 7

In other words, we have no evidence that penguins were ever fliers or descended from birds capable of flight. They were apparently swimmers from the start, unrelated to any flying birds. Evolutionists themselves state that “no fossil has yet been found which sheds any light on these relationships.” 6

Indeed, all known fossil penguins reflect characteristics that are found in the six living genera of penguins.8 Their basic body form has not changed.

So where did penguins come from? The Bible tells us in Genesis 1:20–22 that God created all sea creatures and birds on Day 5 of the Creation Week.

The ancestors of the penguins were created on Day 5. They are distinctly birds, even though there is no indication they ever flew “above the earth.” Like all other birds, for example, they have feathered wings and reproduce on land, distinguishing them from the “great sea creatures.” They also “fly” through the water, using a winged mechanism unlike any other swimming creature (i.e., marine mammals and fishes).

It is possible, given their unique characteristics that evidently have not changed over recorded time, that penguins comprise a distinct bird kind. Although we cannot be dogmatic about this, we can be dogmatic about the fact that the penguin design is a very good one!

A Closer Look At Penguins

Penguins live exclusively in the Southern Hemisphere, except for the Galapagos penguin, which lives in the Galapagos Islands along the equator. Most penguin species nest around the shores of New Zealand, Australia, South Africa, and southern South America. Only two species, the emperor and the adelie, nest exclusively on Antarctica and surrounding islands.