Image by Gobeirne, via Wikimedia Commons (CC BY 2.5).

Life as a Gecko

“Mom! Sticky is on the ceiling again!” The boy watches as his pet gecko enjoys free rein across his bedroom ceiling. Although upset about another escape, he is more intrigued by how the lizard can walk upside down, as if it has superpowers.

“Mom, can I just let him play up there for a while? He seems happy.”

The boy reluctantly grabs a chair and stands on his tiptoes. He nearly snatches Sticky, but the pet wriggles out of his hands. Now Sticky is crawling down a glass window, which the boy also finds fascinating. Sticky jumps to the floor and makes a dash for the bed. The boy leaps across the room. He barely grabs onto the gecko’s tail.

“Mom! Sticky’s tail just fell off! And it’s still moving in my hand!”

Mom joins the chase, and they finally capture Sticky and release him safely in the terrarium. She assures her son that Sticky will grow another tail, explaining that some gecko species can release their moving tails as a defense mechanism known as autotomy. Then she helps him look online to find out how geckos can cruise up vertical surfaces and across ceilings.

Scientists had to magnify the gecko’s foot thousands of times to find out its secret to defying gravity.

They discover that the gecko is designed to climb. Scientists had to magnify the gecko’s foot thousands of times to find out its secret to defying gravity. Gecko feet are covered with ridges composed of millions of hairs called setae. Each hair splits up into hundreds of tiny hair ends. Scientists believe that the branching hairs use special forces to attract the hairs to the surface. The attraction, mostly attributed to the van der Waals force, is so powerful that the gecko can hang by one toe from a ceiling.

With such strong forces working, how does the gecko avoid getting stuck? Does it have trouble picking up a foot? A gecko obviously has no problem switching between sticking and moving. Adhering to a surface happens by dragging its microscopic hairs (which are attached to the feet at an angle) across a surface. To free itself, it simply increases the angle of the hair against the surface. Since gecko toes bend the opposite way of human toes, they can peel their toes from surfaces, changing the angle of contact and decreasing the van der Waals force. Since sticking to surfaces decreases the gecko’s speed, it chooses when to use its clinging ability based on gravity.1 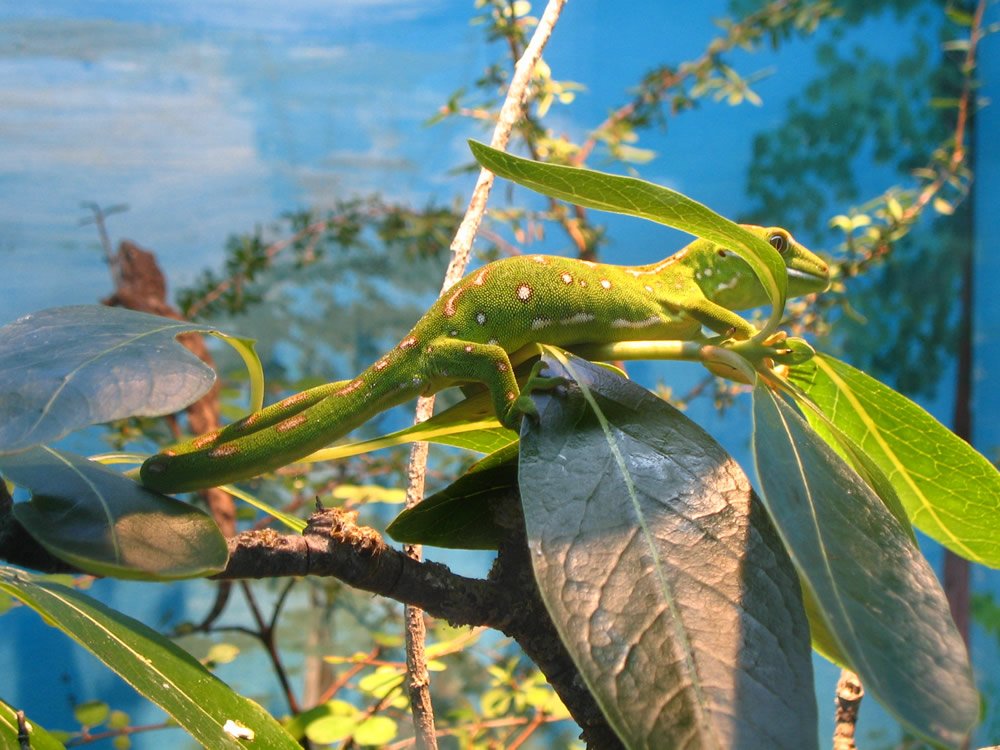 Image by Gobeirne, via Wikimedia Commons (CC BY 2.5).

The intricate design of the gecko’s foot enables versatile climbing. If the foot evolved the microscopic hairs, where is the evidence? Recent fossil evidence involved a gecko preserved in amber, which scientists, using unreliable dating methods, dated to around 100 million years ago (doubling the alleged age of any previous find). Instead of finding transitional feet, scientists could easily see the toe pad structure that gives geckos the ability to adhere to surfaces. The scientists concluded that the gecko had already evolved this unique foot.

That is an easy way to avoid the sticky problem. But let’s face it by considering the difficulty of gecko feet evolving in a stepwise fashion. Suppose a gecko hatched 150 million years ago with little hairs on its feet. What advantage would hair serve in transitional gecko feet? Why would natural selection favor hairy feet until the setae somehow became numerous and complex enough to allow the gecko to hang on a ceiling by one single toe? That kind of complexity doesn’t happen by chance, no matter how much time you allow. Without all parts functioning, there’s no reason for natural selection to “keep it.”

Naturalistic scientists must believe by faith that creatures as complex as the gecko somehow evolved. Scientists cannot go back in time to watch the proposed process of evolution happen. The Creator once asked, “Where were you when I laid the foundation of the earth? Tell me, if you have understanding” (Job 38:4). Since we were not there, but God was, we ought to humbly trust his Word, the Bible. The evidence—even the gecko’s extraordinary clinging ability—should lead us to praise the Creator (Psalm 148).

Previous Article Emperor Penguins: Equipped for Life at the “Bottom” of the World Next Article Elephant: The Giant with Specialized Tools