Emperor of the Ice

Emperor penguins are among the world’s most recognizable and well-loved birds.

With their tuxedo feathers, wobbly walk, and cute offspring, emperor penguins are among the world’s most recognizable and well-loved birds.

They have become favorites of family entertainment and symbols of endurance. Who isn’t familiar with the sight of devoted dads carefully cradling fuzzy chicks on their feet?

Four feet (1.2 m) tall and up to 100 pounds (45 kg) in weight, the emperor penguin is the largest of the penguin species and the only one to breed in Antarctica during its harsh winter season. There are currently as many as 400,000 emperor penguins. Their average lifespan is approximately 20 years, although some have been documented to live twice that long. 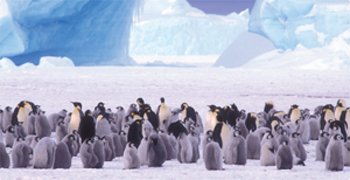 At certain times of the year, thousands of emperor penguins nest together in groups called rookeries. Some rookeries can include thousands of penguins.

Emperor penguins live in what many consider to be the harshest climate on earth, the frozen wasteland of Antarctica. Winter temperatures there generally range from -40°F to -94°F (-40°C to -68°C). But penguins are perfectly adapted to their cold and wet home, both physically and socially.

During the harshest part of winter, males and females begin to pair off. When the female lays her egg, she transfers it carefully to the top of the male penguin’s feet, where he incubates it underneath a skin fold of fat and feathers. This transfer is extremely tricky. If the egg comes in contact with the ice, the developing baby will freeze to death in as little as two minutes. Young and inexperienced couples frequently lose their egg. 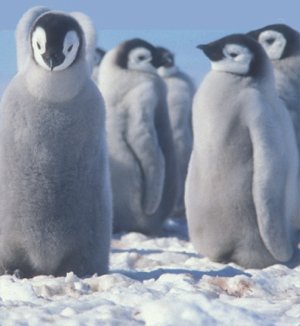 Penguin chicks are totally dependent on their parents until they have shed their down feathers and get waterproof feathers.

After the female penguin has successfully laid her egg and left it with the male, she returns to the sea to feed. The male gathers with other “dads” into a large huddle called a turtle formation, taking turns standing on the edge so that everyone has equal opportunity to be shielded from the extreme cold temperatures and sometimes hurricane-force winds.

While the female forages for food in the sea, the male emperor penguin can lose up to 40% of his body weight. Nine weeks later she returns and takes over care of the hatchling, while the male returns to the sea to search for a much-needed meal. During this time when the chick is growing and needing more food, the ice is melting, making the parents’ trips back and forth to the sea shorter and faster.

The emperor penguin survives mainly on krill, fish, and squid. Its streamlined body and short, flipper-like wings help it “fly” underwater, sometimes to depths as great as 1,500 feet (457 m) or more. 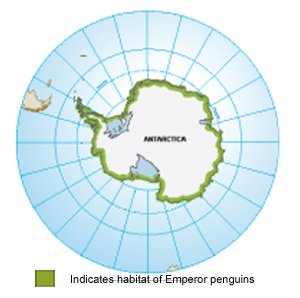 An emperor penguin can hold its breath under water for as long as fifteen minutes, while its insulated body keeps it warm.

Underneath its sleek black-and-white feathers is a thick layer of down that helps to hold in warmth and keep out cold, and body oils help to keep water off its skin. Underneath the skin is a layer of blubber, further insulating the penguin against the harsh temperatures.

Penguins, along with other air and sea animals, were created on Day 5 of Creation Week. It is very likely that there was an original penguin “kind” from which all modern and extinct penguin species originated—and perhaps other flightless birds as well. Scientists have found fossil remains of penguins that were as tall as humans. But these penguins, supposed by evolutionists to have lived millions of years ago, are still recognizable as penguins.

In their original environment, penguins did not eat meat, and they did not need insulation against freezing temperatures. Yet God had already placed within the first parents wonderful, interrelated design features that would soon enable these beautiful creatures to survive in the world’s harshest climate.

After Noah’s Flood, when animals dispersed to locate food and repopulate the earth, the full variety of these birds appeared in the offspring. The ones with waterproof feathers, thick down, and extra fat layers thrived in colder climates, while birds without these features did not.

It is a testament to God’s ingenuity and love of abundant life that He placed in the original penguin kind all the information necessary for these birds to thrive, even in the most extreme climates.