by Dr. Elizabeth Mitchell on May 7, 2015
Featured in Answers in Depth
Share:
Email Using:
Gmail Yahoo! Outlook Other

Did millions of years in the dark evolve away cave crustaceans’ eyes and the brain to see?

Three blind crustaceans, confined to cavernous darkness, have brains that are several nerve clusters short of an optic lobe. When it comes to a brain center for processing input from eyes they don’t have, they are lacking. But is this lack the same as loss? And if so, is it as the BBC reports an example of nearly 200 million years of “evolution in action”?

Blindness in cave-dwelling animals is often touted as a classic example of evolution,1 even though there is no gain of either function or information.2 Furthermore, loss of vision does not result in progress toward becoming a new kind of creature. Blind fish are still fish, and blind crustaceans are still crustaceans. Nevertheless, by discovering how much is missing in “The brain in three crustaceans from cavernous darkness,” authors of the study published in BMC Neuroscience believe they have glimpsed the evolutionary power of living without light.

The ancestors of each of these eyeless crustaceans, evolving in the dark for millions of years, according to the authors, jettisoned some brain parts they did not need. Dr. Martin Stegner, lead author of the study, summed up the distinction between his observations—the amazing neuroanatomical variations he has skillfully discovered—and what he only believes on the basis of his evolutionary presuppositions:

What I've done is looked at the structure, and interpreted it in an evolutionary context.3

The crustaceans he studied represent three orders of Peracarida, a 12,000 species group of crustaceans characterized by an egg-sheltering brood pouch under the carapace of females. All members of these orders4 are eyeless, both as larvae5 and adults. Mictaceans and Spelaeogriphaceans have stubby eyestalks but no eyes. Thermosbaenaceans don’t even have eyestalks.

All are native to hard-to-access, perpetually dark underwater caverns. Mictocaris halope, 3 mm long and the only species of its order, has only been found deep in Bermuda’s limestone caves with underground connections to the sea. Spelaeogriphaceans (like the 7mm long Spelaeogriphus lepidops in the study) are found in brackish water in dark limestone or sandstone caves on southern continents, and Thermosbaenaceans (like the 3 mm Tethysbaena argentarii in the study) are marine organisms native to limestone caves and thermal springs. 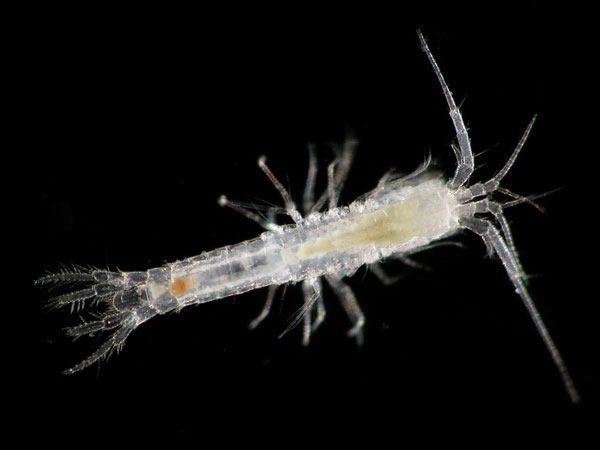 Meet Mictocaris halope, a blind shrimp-like crustacean about 3 mm long. Mictocaris is found only in Bermuda in several deep, underwater limestone caves that have underground connections to the sea. This highly reflective animal has stumpy eyeless eyestalks (not easily seen here) and long antennae. A study of its brain reveals that compared to other crustaceans, even some blind ones, it has little or no parts of the brain ordinarily associated with visual processing. 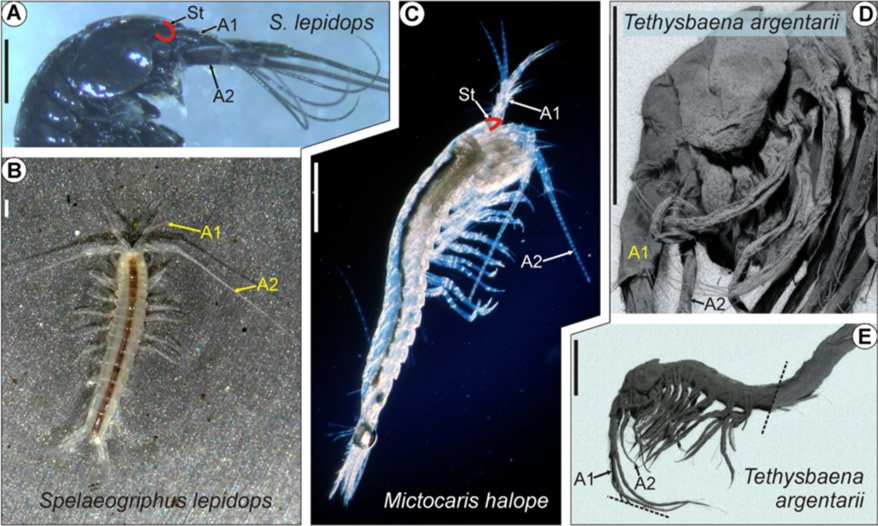 The brains of these three eyeless crustaceans are missing some or all of their optic lobes. Two of them—Spelaeogriphus lepidops and Mictocaris halope—have stumpy eyestalks (St). Spelaeogriphus has only one of the usual four nerve clusters (neuropils) common to crustacean optic lobes, and it is tucked in the eyestalk tip. Mictocaris and Tethysbaena each have a neuropil that might have once had visual processing function if they had sighted ancestors. However, scientists can’t be sure because the neuropil isn’t even oriented toward the eyestalk in Mictocaris, and Tethysbaena doesn’t have an eyestalk. Scale bars = 0.5mm. A1, A2 = antennae. Images: Tethysbaena and Spelaeogriphus were collected in caves beneath Italy’s Monte Argentario and South Africa’s Table Mountain by Stefan Richter and Christian Wirkner and Mictocaris from Bermuda’s Deep Blue Cave by Thomas Iliffe; photomicrographs are published in Martin Stegner et al., “The Brain in Three Crustaceans from Cavernous Darkness,” BMC Neuroscience 16, no. 19 (2015), doi:10.1186/s12868-015-0138-6.

Four, One, or None

The practical difficulty of observing the behavior of these tiny animals makes it difficult to learn much about their biology. Unable to study living specimens, Stegner’s team had to guess about the functions of the various parts of the brains by comparing them with brains in other ten-legged crustaceans like crabs, lobsters, and shrimp. Like them, the brains have three parts—protocerebrum, deutocerebrum, and tritocerebrum. A crustacean’s optic lobe is normally a projection of the protocerebrum. In sighted and in many blind crustaceans, the optic lobe is housed in the eyestalks. That optic lobe generally consists of four clusters of cells (called neuropils). Not so in these species though.

Spelaeogriphus, the researchers found, only has one optic neuropil, and it is located in the stubby eyeless eyestalk. As Dr. Stegner explains, “In a striking contrast [to other crustaceans], the optic center in the protocerebrum of S. lepidops is constituted by only a single neuropil, whose orientation toward the tip of the eye stalk is the only hint at a former visual-coordinative function. Optic nerves are absent.”6

In Mictocaris halope and Tethysbaena argentarii the apparent loss of visual structures seems much further along. In Mictocaris, there is a single neuropil that could correspond to the optic lobe, but it is neither in nor oriented toward the eyestalk. Tethysbaena argentarii, without an eyestalk, has no point of reference for identifying the neuropil. Stegner notes that the evident brain loss in these three blind cave-dwellers is “a vivid evolutionary example of how changing ecological conditions—total darkness—have affected neuroanatomy.”7 Stegner’s team suspects Spelaeogriphus has a nonfunctioning optic neuropil based on its location. However, in the other two species the single neuropil in question might not correspond to an optic lobe at all, vestigial or otherwise, and the researchers believe its identity and function remain in question.

Thinking that perhaps non-visual senses might be augmented in these blind species, the researchers examined other sensory portions of their brains. In two, Mictocaris and Spelaeogriphus, the olfactory lobe responsible for processing smells was comparatively large, but it was small in Tethysbaena.8 All the species had nerve connections to their prominent antennae, however. The animals are apparently anatomically compensated for their lack of eyesight.

The three orders Stegner’s team studied are not the only blind cave-dwelling crustaceans, but they are three whose evolutionary relationships with other crustaceans have long been a matter of debate. How to classify these shrimp-like animals actually became more confusing when genomic studies were introduced, as genetic and anatomical clues often lead in different directions. The authors had hoped that their study of these crustacean brains would unravel the classification confusion. It didn’t. Though their neuroanatomical discoveries contributed more data “to the phylogenetic debate,”9 the failure of the information to fall into evolutionarily sensible patterns forced the authors to conclude, “The phylogenetic implications of our data are weak.” Nevertheless they maintain that even though crustacean classification remains as muddled as ever, their work “contributes to a more coherent picture of brain evolution” in ten-legged crustaceans and shows what evolution could do over time.10

Stegner and colleagues think these crustaceans had almost 200 million years to accomplish this evolutionary feat. They believe the southern continental habitats of Mictaceans and Spelaeogriphaceans are remnants of an ancient southern supercontinent called Gondwana. Thermosbaenaceans are found only in regions believed covered or edged by the Tethys Sea, said to have covered Eurasia during the Paleozoic period. Evolutionary scientists believe the ancestors of these species were stranded in underwater caves by the breakup of Gondwana and the regression of the Tethys Sea. All three orders are thus believed to be relicts of a time long past when Earth’s geological convulsions isolated them from light and all other living things except those trapped with them until modern man came exploring.

Spelunking in Light of the Bible

Biblical Flood geology models do suggest that transitory supercontinents existed during the global Flood. The Tethys Sea refers to the waters that covered Eurasia, now marked by the many Paleozoic fossil-bearing layers deposited there by the global Flood about 4,350 years ago. (Read more about how Earth’s modern landmasses make sense in light of the global Flood in “Noah’s Lost World” and “A Catastrophic Breakup.”) But, millions of years are not needed to make sense of how cave refuges isolated these crustaceans. Caves carved in Flood-deposited sedimentary rock layers would have left those inhabitants that were equipped to survive the conditions in which they were trapped free to form populations adapted to their environment. By way of analogy, we have recently seen that populations of virtually identical blind cavefish isolated in such caves formed populations now separated by 6,000 miles of ocean. Isolated in unremitting darkness and undisturbed by competitors, animals blinded by mutations or other defects might well survive, thrive, and multiply.

So is this peek into cavernous darkness an eye-opening revelation of evolution in action? Does it somehow paint a picture of cell-to-shrimp evolution? No. Nothing new is evolving. No new function, no new information, and no new kind of animal. If these species are varieties of a created kind that were not designed as they are now but instead have lost the ability to see (as seems likely), then they have lost—not evolved—sensory and brain structures.

Even at that, we might consider losing your peepers and the neuroanatomical underpinnings for vision an “evolutionary”—or perhaps de-evolutionary!—feat of dubious value. Some suppose eye loss and brain loss were advantageous because energy was not wasted building useless visual senses—and that may well be—but that is not evolution! There is no evidence that such saved energy was used to evolve any new, more complex kind of organism. In light of the genetic kinship of blind cavefish from freshwater caves separated by 6,000 miles of ocean, perhaps focusing on the isolation of these crustaceans rather than their “evolution” would offer a less contrived way of understanding how they might have changed over time.

But there is no reason to assume these phenotypic changes would require millions of years to occur! We see in cavefish, for instance, that cross breeding of cavefish blind from different caves can produce sighted cavefish, undoing “2–3 million years” of so-called evolution in just one generation.11 (Read more about it in “How Cavefish Went Blind, and Why It Matters.”) These three blind, shrimp-like species might well be the product of mutations or other degenerative heritable changes in isolated crustaceans whose survival and proliferation into blind populations was made possible in selected environments where sight is useless. They are not, however, examples that support evolutionary dogma but are instead, at most, illustrative of the dramatic variations that can develop in isolated populations.

Previous Article Attempts to Trace Life Back to Chemical Origins Still Maps the Willful Ignorance of the Hunters Next Article The Big Bang of Bird Evolution?