How Cavefish Went Blind, and Why It Matters

Molecular mechanism at the root of cavefish blindness is unmasked.

What makes cavefish go blind? Now we know (or at least we have evidence for a strong possibility). But it isn’t evolution!

Mexican tetras living in the light look at their world the same way other fish do. But their same-species sisters and brothers native to Mexico’s subterranean caverns—blind cavefish—are albinos with tiny eye sockets and degenerated eyes. New research has shown a “molecular chaperone” may mask preexisting mutations in these fish until they are exposed to the stress of the subterranean world.

This molecular chaperone is found in many organisms and is an example of God’s design both for mitigating the effects of deleterious mutations and for facilitating adaptive variation. The discovery is creating controversy among evolutionists who nevertheless cite it as an agent for expedited evolution.

During the recent Ken Ham-Bill Nye Debate, Ken mentioned that blindness in cavefish is commonly presented as an example supporting evolution. “But it’s not,” he said. “You’re not getting new information; you’re not getting new function.” Yet Science writer Elizabeth Pennisi explains, “To the classic case studies of evolution, such as Darwin's finches and the peppered moth, a small group of researchers would now add the Mexican tetra. These freshwater fish inhabit creeks and rivers. But at least a half dozen times, populations have taken up residence in caves, where they have been transformed. They remain the same species, but are now eyeless and nearly albino.” 2 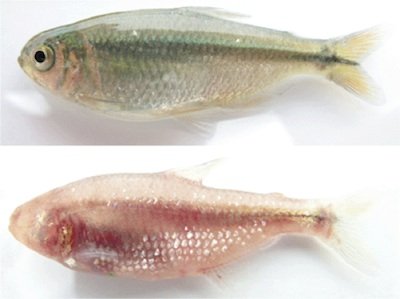 Like Darwin’s finches and peppered moths, Mexican tetras display enormous phenotypic variety and illustrate the effects of natural selection. However, they only vary within their created kinds! They showcase the biblical principle that God put in place during Creation Week about 6,000 years ago when He created animals to reproduce after their kinds.

Evolutionists believe it took 2 to 3 million years for cavefish to “evolve” their blindness. Yet blind cavefish from different regions, when crossbred, produce sighted offspring in only one generation.3 These fish had not evolved blindness. They were just blind variants of the same kind of fish. When populations that had lost their genetic information for sight while isolated were reunited, the genetic information for proper eyes was reassembled like the pieces of a puzzle.

But could the variations that made the fish go blind in the first place have really been hidden in plain sight all along? What could have hidden them?

Can unexpressed genetic variations be maintained in a population? Nineteenth century scientist Conrad Waddington suggested such unexpressed variations could be masked and preserved across time until brought to the surface by some sort of stress. The mysterious masking agent was nicknamed “Waddington’s Widget.”

Since crossbred blind cavefish can produce sighted offspring, it appears their blindness may have resulted when natural selection acted on unmasked preexisting genetic variations in isolated populations of subterranean fish. But what would have masked eye-minimizing variations in the genome? And why would being in a cave have unmasked those variations to be acted on by natural selection? “Waddington’s Widget” was needed, and its name may be HSP90. HSP90 stands for heat shock protein 90, and it answers a question that has puzzled biologists for over a century.

This study does demonstrate one way that God’s design may have diminished the adverse effects of many mutations.

In 1998 geneticist Susan Lindquist showed that HSP90 prevents the expression of genetic variations in laboratory fruit flies. When HSP90 was inhibited, flies were born with bizarre eyes and legs and other anomalies. Now Lindquist and a Harvard team led by Nicolas Rohner and Clifford Tabin have shown that HSP90 inhibition is associated with eye degeneration in Mexican cavefish.

HSP90, which is present in many kinds of organisms, may act as a “molecular chaperone” by preventing the phenotypic expression of mutations. Proper protein function depends on their three-dimensional shape, which is maintained by interaction of the amino acids that make up the protein. Mutations can result in substitution of amino acids, altering protein structure and functionality. HSP90 may buffer the effect of many such mutations by keeping the proteins from losing their optimal shape despite substitutions.

Rohner found that treating the embryos of sighted surface-dwelling Mexican tetras (Astyanas mexicanus) with an HSP90 inhibitor caused the fish to be born with a wide variety of eye sizes. Offspring of the resulting small-eyed fish also had unusually small eyes.4

The challenge was then to show that HSP90 could be inhibited by the cave environment. Darkness doesn’t affect HSP90. In looking for other unique characteristics of subterranean rivers, the team noted that cave water contains less ionic salt. (Fresh water contains dissolved mineral salts, which is why water conducts electricity so well. But subterranean water is less salty than surface water.) The shape of protein molecules is affected by the ionic content of water, so Rohner speculated that HSP90 might have to work overtime to protect proteins from changing shape in cave environments.

To simulate this stress, Rohner incubated embryos of sighted surface fish in water with the low salinity of underground cave water. When hatched, these fish had small eyes and small eye sockets just like the fish treated with HSP90 inhibitor.

Blind cavefish have particularly small eye sockets and poorly developed eyes that degenerate and are scaled over. Thus it appears that inhibition of HSP90 due to the cave environment may be the key to developing fish with diminutive eyes and eye sockets. HSP90 has no effect on fish pigmentation, so other factors must be involved in the loss of pigment.

Rohler proposes that once the inhibition of HSP90 unmasked small-eyed genetic variations in an isolated population of cavefish, the fish with the most degenerate eyes might be favored to survive because they could devote their energy resources to developing other senses, which actually are more highly developed in blind cavefish.

Extrapolating From Variation To Evolution

Blind cavefish and their sighted counterparts are the same species. Blind cavefish are just varieties of their sighted surface-dwelling cousins. Nevertheless, geneticist Susan Lindquist says this discovery is “a capstone, establishing that [HSP90] can explain a lot of complex evolution in higher organisms.”5

Darwin once extrapolated from observable variations among his pigeons to the imaginative development of new kinds of species from less complex ones over millions of years. He wrote, “If feeble man can achieve all these variations in so short a time, by artificial selection, I can see no limits to the amount of change, to the beauty and infinite complexity which may be effected in the long course of time by nature’s power of selection.” Darwin thought that observable variations within created kinds were evidence for unobservable evolution of new kinds. Lindquist’s statement suggests the same sort of thinking.

While scientists still have much to learn about the way HSP90 and similar molecular chaperones work, this study does demonstrate one way that God’s design may have diminished the adverse effects of many mutations. Furthermore, by masking genetic variations without allowing natural selection to root them out of populations, those variations remain available until they are needed as the raw material for adaptations. Who but God would ever foresee, for instance, that the eye loss option might be useful for certain animals in certain circumstances in this cursed world!

Rapid adaptive variation may thus be achieved within a created kind of organism through just such a mechanism—natural selection’s operation upon previously hidden genetic variants. However, there is no scientific justification for extrapolating fish variation as support for evolution of one kind of creature into another kind. And there is no reason to think that such adaptation would require millions of years.

Despite the evolutionary effort lay claim to blind cavefish for the evolutionary cause, this study—like everything else scientists have discovered about blind cavefish—actually supports God’s account of His creation of all kinds of animal just 6,000 years ago. From those original kinds of creatures, the marvelous variety we see in the world today has developed.

Previous Article Why Do Arms and Legs Come in Pairs? Next Article Ancient Footprints Place Humans in England Early in the Ice Age