Mantis shrimp larvae, like many marine larvae, are camouflaged by their transparent bodies. But their compound eyes1, sticking up on stalks, contain opaque pigment and therefore cannot be transparent. Yet the larvae hide their eyes quite nicely. How do they do it? Mantis shrimp larvae, researchers have discovered, do it with mirrors! 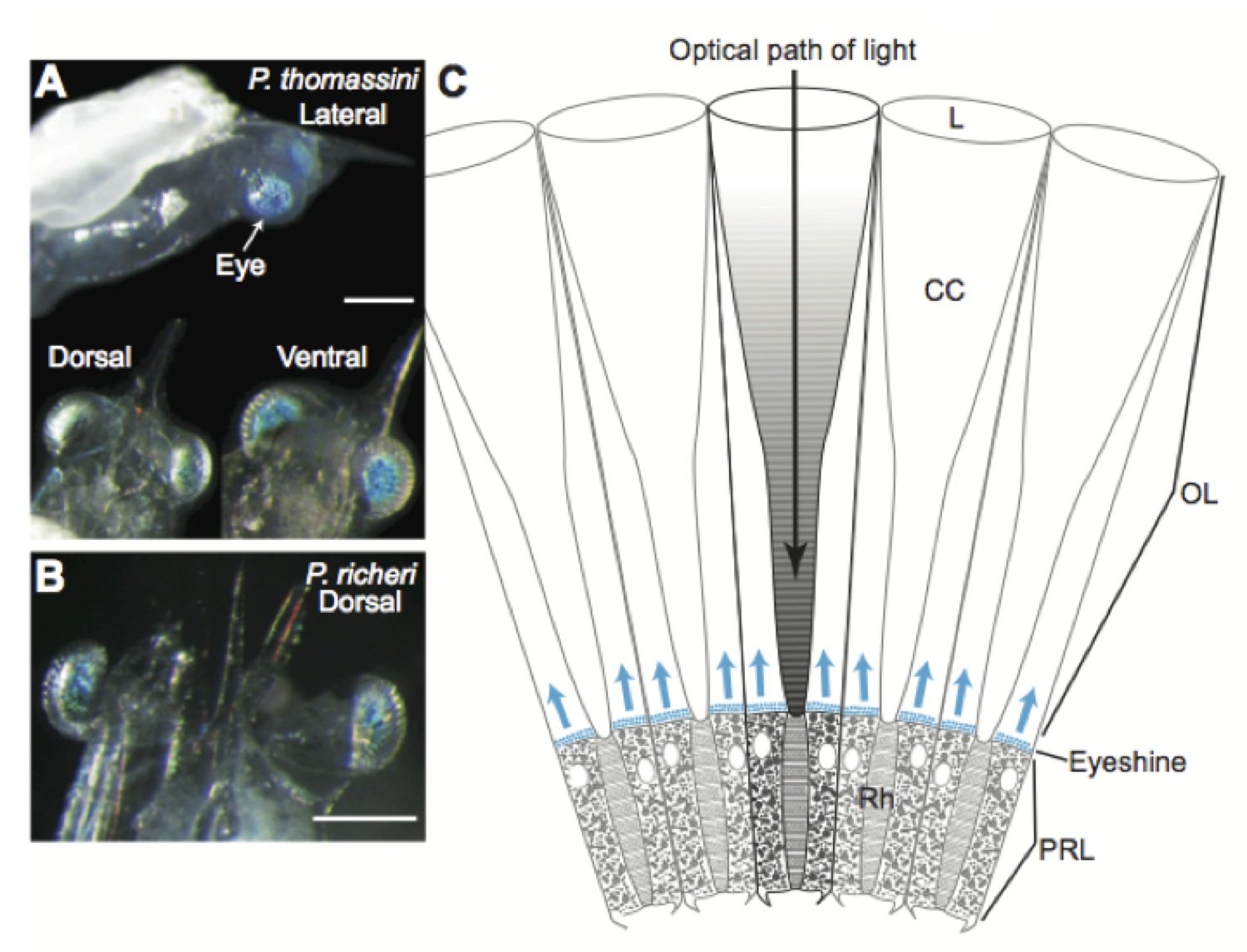 These are photographs of two of the mantis shrimp larvae species whose eyeshine was investigated in the study—Pullosquilla thomassini (A) and Pseudosquillana richeri (B). Visible in laboratory lighting here, these shrimp disappear in their natural habitat, hiding the opaque pigments in their eyes behind little mirrors depicted in blue in the diagram. Pullosquilla thomassini (A) displays the characteristic two-tone reflection of its species. The diagram (C) shows the hypothesized anatomical basis for eyeshine in these shrimp and is based on the known anatomy of other species. PRL =photoreceptor layer; Rh=rhabdom; L= lens; CC=crystalline cones; OL=optical layer. Scale bars= 500 micrometers. Image: K. Feller and T. Cronin, “Hiding opaque eyes in transparent organisms: a potential role for larval eyeshine in stomatopod crustaceans,” The Journal of Experimental Biology 217 (2014): 3263–3273, doi:10.1242/108076.

Larvae in the Lab

To figure out how the shrimp larvae hide their eyes, Kathryn Feller collected mantis shrimp larvae from Australia’s Great Barrier Reef. In her lab, exposed to ordinary white light, the shrimp glowed blue-green. “The whole sphere of the retina at the centre of the eye reflects this sparkly blue-green light,” she says. “It’s quite brilliant.”

Feller measured the spectra of this eyeshine reflected from several species of shrimp larvae. Some, like Pseudosquillana richeri and a Harpiosquilla larva, bounced back blue-green light with “very discrete peaks in that region of the spectrum.” Another species, Pullosquilla thomassini, reflected light in two different colors—green from the top part of the eyes and blue from the bottom. Spectral analysis confirmed this to be a distinctive characteristic of the species. “We suspect that it is something similar to counter shading,” Feller says. “Perhaps the dorsal part of the eye is held against background that is greenish and the ventral part of the eye is more bluish.”

Shrimp in the Sea

Back in the ocean, Feller photographed the shrimp at various depths, from various angles, and at different times of the day. She confirmed that the eyeshine reflects light of a wavelength and color corresponding to the background light in the environment. “Larval eyeshine does a really nice job [of making the eyes invisible], I didn’t expect it to do as good a job as it does, that’s for sure,” says Feller. “The peak wavelength that is reflected off the eye is the same as the peak wavelengths that are available in the environment.” The spectral range of light reflected by shrimp larvae from the Atlantic Ocean differs, though they were not the objects of the current study. Feller and Cronin thus suspect that larvae produce eyeshine with a spectral range attuned to their environmental light.

Unrelated to vision or photosensitivity, the eyeshine in these animals serves purely as camouflage.2 The quality of this camouflage in the larvae’s natural habitat was particularly evident when dead larvae with degraded eyeshine were used as controls in the photographs.2

The anatomical structures that enable eyeshine—much less spectrally matched eyeshine—in these larvae are, the authors note, “not currently understood, though photonic structures are widely used for camouflage in the aquatic environment. Broad-band reflectors, or silvery mirrors, are a common and effective solution to camouflaging in the pelagic [twilight zone] environment.”

The compound eyes of mantis larvae are on stalks, a construction that allows the animal a wide view of the world around it but limits its cloaking options. Many marine creatures create a silvery mirror that reflects an image of their surroundings, but the stalked eyes apparently lack the space to hide themselves using the same mechanism. Scientists suspect, based on studies of other shrimp larvae, that shrimp larvae eyeshine is produced by three-dimensionally arranged, tightly packed, spherical vesicles containing green light-reflecting pigments between the eye’s photoreceptor layer and the optical layer.3 The actual eye anatomy of these particular shrimp species is currently under investigation.

The authors write, “Predation is a strong selective force that may drive the evolution of stomatopod larval eyeshine. Previous work demonstrates that rates of fish predation on transparent cladocerans increase when the size and pigmentation of the eyespot is increased via dietary uptake of India ink. Though predation is a likely force driving the evolution of stomatopod larval eyeshine evolution, this hypothesis remains untested.”

Predation—selectively allowing the best-concealed larvae in each ecosystem to survive—likely drove speciation of these shrimp. However, such natural selection is not evolution and would have no power to cause these tiny mirrors to evolve in the first place. Natural selection can only weed out the varieties that were not equipped with the best spectral qualities for each environment. The most invisible larvae—those that match the spectrum of the ambient light in the surrounding twilight zone of the sea—are likely to be the survivors who live to pass on their genes to the local population. Thus, predators and local lighting conditions likely select the variations represented in the shrimp larvae populations in each ecosystem. However, nothing about this finding illustrates how evolution could have driven the development of the tiny mirrors behind which mantis larvae hide their tiny eyes.

God provided cloaking camouflage to several marine creatures in different ways. Bioluminescent sharks, for instance, can tune their eye-lights to the changing lighting conditions above them to blend in. Silvery fish use two kinds of guanine crystals to bend light so as to mirror their environment and disappear in plain sight.

What we see here is another grand example of God’s design in light of the after-effects of the Fall. Carnivory and predation are a part of this sin-cursed world. Therefore animals need to be able to camouflage themselves lest entire populations be consumed and the food chains dependent on them collapse. This protective design allows populations of these tiny organisms to adapt to their specific environments and escape predation sufficiently to perpetuate their populations and supply the needs of the animals that depend upon them in the food chains of today’s world. This is another design that serves as a biological cloak in a marine environment, and one that is perfectly suited to otherwise transparent animals with tiny eyes on stalks. We look forward in the future to learning more details about the intricacies of God’s design for the eyes of these larvae, tuned as they are to particular habitats.

Previous Article Did Humans Evolve to Drink Alcohol? Next Article The Bible Wins the Debate with Carbon-Dated Camel Bones