Cambrian Arthropod Had Legs on Its Head

Some exquisitely well-preserved Cambrian arthropod fossils, reported in Nature, prompted one internet blogger to comment “Ancient fossil reveals that Cthulhu really did live on Earth 500 million years ago.”1 Indeed, the nicely preserved legs on and near the head segment of these fuxianhuiids, including Fuxianhuia protensa, are reminiscent of the fictional monster created by H.P Lovecraft in the early days of science fiction. 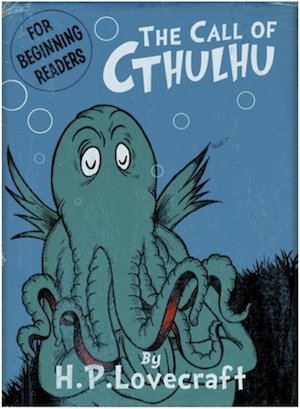 The recent discovery that a brainy Cambrian arthropod also had legs on its head calls to mind H.P. Lovecraft’s fictional Cthulhu (pronounced KAH-THOO-LOO). This cover art for a proposed children’s adaptation of the 1928 science fiction magazine classic in which Cthulhu made his debut is one of the friendlier appearing versions of the fictional malevolent undersea monster. Image credit: DrFaustusAU through geekartgallery.blogspot.com

Inspired by Alfred Lord Tennyson’s poem The Kraken, Lovecraft’s Cthulhu was “an octopus, a dragon, and a human caricature”2 having “a pulpy, tentacled head [which] surmounted a grotesque scaly body with rudimentary wings.”3 Trapped in a fictional undersea city but possessing evil supernatural powers, Cthulhu debuted in the 1928 magazine Weird Tales and later became a science fiction icon.

Literature, including science fiction literature, uses imaginative stories not only to entertain but also to explore many aspects of human nature. But this latest fossil discovery is being imaginatively hailed by at least one coauthor of the study reporting it as offering information relevant to humanity’s origins.

Just last year Fuxianhuia protensa was shown to have possessed a complex brain (have a look at some impressive pictures in our discussion at Cambrian Invertebrate with Neural Complexity Similar to Modern Insects). This modern-appearing brain so early in the fossil record was a surprise to some evolutionists. As Uppsala University paleobiologist Graham Budd commented, the antiquity of complex brain tissue at the time of the Cambrian explosion “‘throws the cat amongst the pigeons’ in terms of previous hypotheses about how brains evolved.”4

In other words, the complex brain seen in modern insects does not seem to have a rudimentary evolutionary ancestor identifiable in the fossil record. Instead, it seems to have appeared quite suddenly half a billion years ago (by evolutionary reckoning). 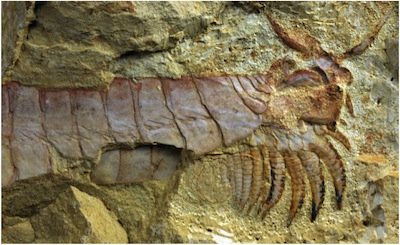 This is one of the Cambrian fuxianhuiid fossils that not only has the recently discovered complex nervous system but also a pair of “legs” on its head. There are also a number of anteriorly placed walking legs. The appendage that is getting all the attention is labeled SPA—specialized postantennal appendage—in the accompanying illustrations. Image credit: Yie Jang (Yunnan University) through www.livescience.com 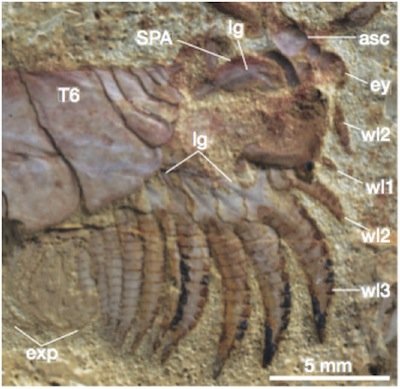 This close-up of one of the fuxianhuiids shows the short articulated “SPA” adjacent to a longitudinal groove (lg) as well as walking legs (wl), an eye (ey), and various exoskeletal plates such as the anterior sclerite (asc). Image credit: J. Yang et al., “Specialized appendages in fuxianhuiids and the head organization of early euarthropods,” Nature 494 (28 February 2013): 468–471, doi:10.1038/nature11874, usrexp-sandbox.nature.com

One of the ongoing debates among evolutionists concerns the evolutionary history of arthropods, the phylum that includes insects, spiders, and crustaceans. A simpler evolutionary ancestor, many believe, would have evolved a series of virtually identical body segments and later evolved specializations of those segments. The segmental nature of the head of many arthropods is not readily apparent. Therefore, the discovery that this Cambrian arthropod had articulated “legs” on its head, the authors write, “offers key insights for reconstructing the ancestral condition of the euarthropod [true arthropod] head.”5

Experts have debated the evolutionary relationships of ancient and modern arthropods as well as the structure of their ancestral anatomy.

In the absence of clearly preserved appendages on the head of previously discovered fuxianhuiids, experts have debated the evolutionary relationships of ancient and modern arthropods as well as the structure of their ancestral anatomy. These well-preserved fossils reveal a short pair of jointed appendages just behind the antennae and beside the mouth. The authors suggest they were useful for sweeping food into the mouth as their short length and position would have likely precluded their use for grabbing prey.

Comparison with the embryological development of modern arthropods illustrates that paired appendages like these form segmentally. Evolutionists tend to draw conclusions about unobservable ancestral evolutionary history based on observable embryology. Therefore, the authors believe these fossils support the idea that an earlier ancestral arthropod actually had a series of similar segments and later evolved greater complexity, like that seen in these fuxianhuiids.

This fuxianhuiid from the same group of specimens shows how the paired SPAs (specialized postantennal appendages) are located just behind the antenna (ant). They are attached to either side of the mouth, beside the hypostome (hyp), and their presence suggests the arthropod head has, like the rest of its body, a segmental organization. The SPAs were found in a variety of positions in the specimens, suggesting they were mobile. Joint articulations suggest they were real legs, ideally suited for sweeping debris into the mouth. Image credit: J. Yang et al., “Specialized appendages in fuxianhuiids and the head organization of early euarthropods,” Nature 494 (28 February 2013): 468–471, doi:10.1038/nature11874, usrexp-sandbox.nature.com

“Since biologists rely heavily on organization of head appendages to classify arthropod groups, such as insects and spiders, our study provides a crucial reference point for reconstructing the evolutionary history and relationships of the most diverse and abundant animals on Earth,” explains coauthor Javier Ortega-Hernández. “This is as early as we can currently see into arthropod limb development. These fossils are our best window to see the most primitive state of animals as we know them – including us” (emphasis ours).

So has this discovery that ancient arthropods may have had a segmentally organized head shined light on the evolutionary history of arthropods—“and us”? Has it shown that ancestral arthropods must have had a series of identical segments that later gave rise to more specialized complex designs? Not at all. Having a segmentally organized head (whether as an adult or as an embryo) doesn’t reveal arthropods evolved from simpler anatomical schemes. No evolution from simpler creatures is shown here. Instead, the discovery shows that these extinct invertebrates, like extant (living) invertebrates, possessed a level of complexity that equipped them for life in their environment.

The “Cambrian explosion” makes sense when we realize it represents a massive graveyard of marine invertebrates catastrophically buried very early in Noah’s Flood. It is no surprise therefore to find Cambrian creatures with characteristics matching the complexity of modern animals. God created all kinds of organisms about 6,000 years ago and equipped them to reproduce after their kinds, not to evolve through random processes into new and more complex kinds of creatures.

These creatures included both simpler and more complex ones, and they were optimally designed for life without evolutionary predecessors.