Scorpion Venom Is No Match for Mighty Mouse

Not a poison but a pain-killer, scorpion venom is a vain deterrent to hungry grasshopper mice.

No Pain, All Gain

A bark scorpion’s sting is intensely painful to a rat, an ordinary house mouse, or a person. In fact, its venom not only deters most predators but can paralyze respiratory muscles and kill a small mammal. Thus it seems odd that a mouse weighing no more than two ounces doesn’t just roll over and die when it tackles one of these venomous arachnids. Yet the bark scorpion’s venom is a garnish for a hungry grasshopper mouse, not only failing to deter its dining pleasure but offering a temporary analgesia to other painful stimuli.

Scientists still don’t know what makes the grasshopper mouse immune to scorpion venom, but a recent study has discovered the secret to its ability to ignore the pain. It doesn’t have any—pain, that is. And unraveling just why the mouse finds this venom paradoxically soothing may offer medical pharmacologists some new avenues to investigate as they seek better ways to control human pain. 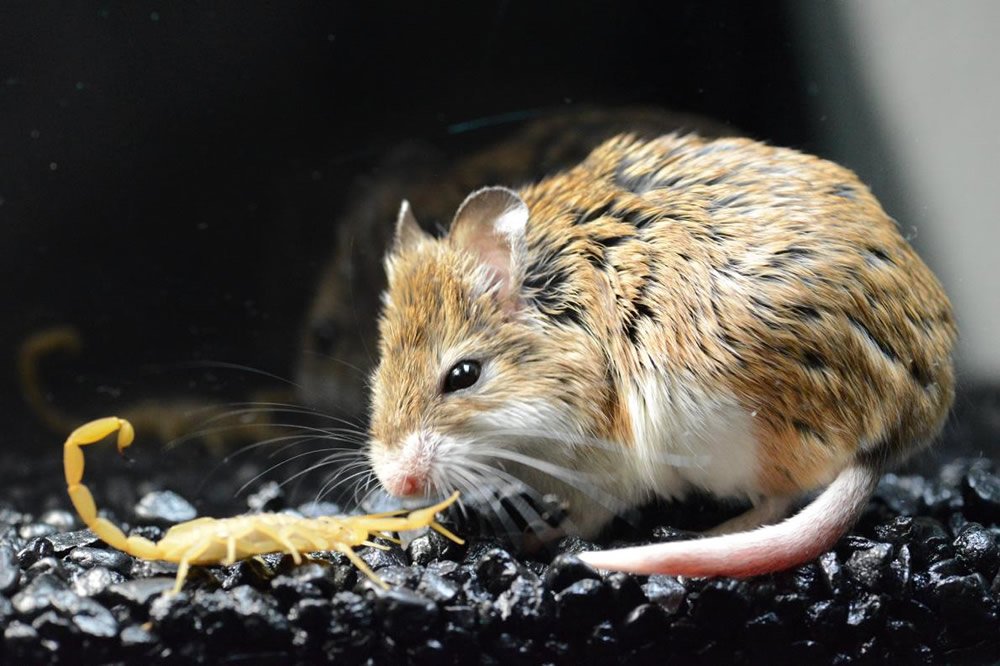 A sting from this bark scorpion will not dissuade this grasshopper mouse from eating it. In fact, the mouse will hardly even feel the pain that would drive other animals away. The mouse’s analgesic secret—now revealed—may help pharmacologists develop more effective pain-killers for people. Image by Matthew and Ashlee Rowe, via National Geographic.

Ashlee Rowe and colleagues report in the journal Science (25 October 2013) that the grasshopper mouse—in the cell membrane of nerve cells that relay pain messages to its brain—has a protein molecule that differs from that found in the house mouse by a single amino acid at a key location. A toxin in the venom, instead of sending the little mammal’s brain a “this really hurts” message, actually binds to this molecule and blocks pain messages to the brain.

Pain can be a useful thing. It protects us from continuing to do things that hurt us—like touching a hot stove. People suffering from disorders that interfere with normal sensitivity to pain—such as diabetic neuropathy—often inadvertently injure themselves. Many animals use some sort of painful bite or venom to deter predators. Evolutionists explain the rarity of predators lacking any sensitivity to the pain inflicted by their prey on the basis of the general overall usefulness of pain. In other words, while blocking the pain sensation might be handy for the moment, blocking it altogether would not be a good thing.

When something causes pain, the “pain message” must be relayed to the brain in order for that pain to protect us beyond our initial sudden reflex reaction. Such nerve impulses are passed from nerve to nerve as ions flow through “ion channels” and generate the electrical impulses that the brain ultimately recognizes as messages. When a “pain message” arrives at the mammalian spinal cord, the message must travel through a couple of such “ion gates” en route to the brain. These gates consist of membrane protein molecules. Scorpion toxin normally binds to these gate proteins, allowing the “really intense pain” message to travel to the brain.

Many organisms have unimportant differences in the exact amino acid sequences of important proteins, but some differences cause those proteins to behave very differently.

The grasshopper mouse’s membrane protein guarding one of these gates differs from that of the house mouse and many other mammals by one crucial amino acid. Amino acids are the chemical building blocks of proteins, and the particular amino acids making up a protein cause it to behave the way it does. Many organisms have unimportant differences in the exact amino acid sequences of important proteins, but some differences cause those proteins to behave very differently. A single mutation in an organism’s DNA can produce an amino acid substitution. The investigators systematically tested the effect of various amino acid substitutions in the pain-gating pore protein called Nav1.8 until they discovered which substitution was responsible for the grasshopper mouse’s neurological armor.

The scorpion toxin, when bound to the grasshopper mouse’s version of Nav1.8, not only failed to open the pain gate to the brain but actually kept it from opening. To confirm that the suspected amino acid difference was responsible, they tested house mice in which such a mutation had been introduced. While none of the house mice acquired “superhero spider sense,” they had become as impervious to the pain caused by scorpion venom as grasshopper mice.

Many animals are immune to various toxins because the ordinary “targets” for those toxins vary structurally in ways that prevent toxin molecules from binding to them. The authors believe their discovery represents a “unique evolutionary strategy”2 because here the toxin still binds to the target but paradoxically shuts it down. They suggest that this pain-gate protein variant, which they did find present in several other rodents and a primate, “most likely evolved in a mammalian ancestor under selection pressures that were not associated with scorpion venom,”3 and added that the grasshopper mouse was then able to use the modified protein to reduce sensitivity to the pain induced by the venom.4

Such a mutation produced no “new” genetic information of the type necessary for molecules-to-man evolution, only variation of existing information.

In essence—however the grasshopper mouse came to have this variant in its genome—the variation potentially offered it a selective advantage for survival in this sin-cursed post-Fall world by enabling it to exploit a venomous scorpion ubiquitous in its habitat as a food source. God may have designed this mouse’s mouse ancestors with this particular form of Nav1.8, or they may have developed it through the process of mutation, but such a mutation produced no “new” genetic information of the type necessary for molecules-to-man evolution, only variation of existing information. This variation did not equip the mouse to become something different than a mouse, just one that can exploit an otherwise uncooperative new food source.

Such a mutation produced no “new” genetic information of the type necessary for molecules-to-man evolution, only variation of existing information.

Natural selection (and possibly other mechanisms), may have led to the grasshopper mouse being the king of the scorpions, but this is not evidence for molecules-to-man evolution. Neither do mutations—even those that end up supplying an organism with a potentially selective advantage in particular circumstances (like making a pain-dealing food source like a scorpion accessible)—produce the new information necessary to make them the so-called “engines of evolution.”

Scorpion venoms consist of a variety of biochemicals that have not yet been thoroughly investigated. However, about a year ago we reported on the discovery of potent nontoxic pain-killers in black mamba snake venom, another discovery that could well lead to development of potent analgesics. Furthermore, that snake’s deadly venom seems to have come about as a result of duplications and other mutations in genes that code for harmless substances. Such genetic gymnastics do not produce new information that leads to the evolution of a non-snake, however; they just make existing genetic information more useful under particular circumstances.

These discoveries are consistent with our understanding from God’s Word that God created a perfectly good world that was in many ways disrupted and degraded—cursed—by God’s judgment in response to the rebelliousness and sin of man. Though we cannot be dogmatic about the precise scenarios surrounding the development of every defense and attack structure in the world today, the development of toxic substances with adaptive value—because they deter predators through pain or even kill attackers or prey—is consistent with a biblical understanding of an originally good world groaning (Romans 8:19–23) as a result of man’s rebellion against God.

Thanks not to a shared evolutionary history but to common designs resulting in similarities in the biochemistry, cellular biology, and anatomy of many organisms, scientists are able on the basis of animal discoveries like this to develop pharmaceuticals effective for humans and many animals. This discovery may therefore, as the neurobiologists who systematically unveiled the mighty mouse’s secret hope, lay the foundation for “designing highly selective, non-addictive analgesics.”