Does the Secret of the Earth’s Origin Abide in the Planet’s Core?

Journey to the center of the earth said to show how our core came to be.

Without our magnetic field, earth would be a very different place. Earth’s magnetic field protects us from cosmic radiation. The magnetic field is a shield, deflecting harmful charged particles and thereby guarding our upper atmosphere, including the ozone layer, from the solar radiation that would destroy it and, with it, the conditions that support life. Our magnetic field is generated by the motion of liquid iron alloy in earth’s outer core, driven by the intense heat of the iron alloy in the solid inner core. But how did earth’s metallic iron core ever become separate from the overlying mantle? 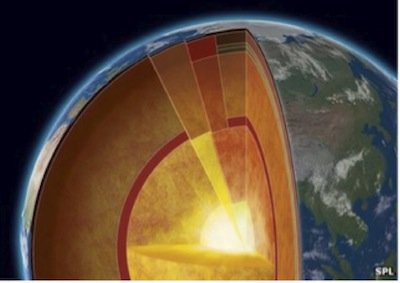 Earth consists of a complex series of layers. Beneath the outer crust is the mantle and then the core. The interaction of the minerals and metal comprising these layers and the tremendous heat and pressure inside the earth influence the properties of those layers, which in turn not only influence seismic phenomena but even generate earth’s important magnetic field. The way earthquake waves travel through the earth provides clues to the composition and conditions at depths far too deep for direct observations (see Journey to the Center of the Earth). Image: SPL, www.bbc.co.uk 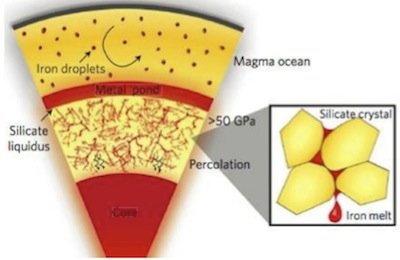 Scientists have determined that at the tremendous pressure at earth’s inner core, solid iron alloy at near-melting temperature becomes less stiff, explaining some enigmatic seismic properties of our core. The properties the Stanford-based team has discovered may even help explain how iron remains segregated from the mantle in the earth’s core. But the team claims that their findings also explain—assuming a complex series of hypothetical steps took place in the order they suggest—how the earth’s core formed in the first place. Image: www.bbc.co.uk

This question has long remained an enigma for secular scientists who believe that big bang cosmology and the nebular hypothesis explain the existence of our solar system. The nebular hypothesis holds that fast-moving particles accreted together to form planetesimals, eventually giving rise to planets. Yet—besides various other problems1 with this presumed scenario—this hypothetical mechanism fails to explain how iron could segregate itself from the silicate minerals that make up the mantle, which is solid in its lower portion due to extreme pressure.

A Stanford University-based team led by Wendy Mao has discovered some amazing properties of molten iron that go far toward explaining why the earth’s core behaves the way it does. They believe their discovery also explains how our planet’s core formed in the first place.

Mao and colleagues, in a paper published October 6, 2013, in Nature Geoscience, write, “Core formation represents the most significant differentiation event in Earth’s history. Our planet’s present layered structure with a metallic core and an overlying mantle implies that there must be a mechanism to separate iron alloy from silicates in the initially accreted material.”2

Of course it is not possible to directly observe the earth’s core. The metallic core is separate from the stony mantle about 1,800 miles down, and the center of the earth is almost 4,000 miles beneath our surface. Nevertheless, indirect methods of assessing the nature of earth’s depths, such as measurements of the behavior of seismic waves, have provided a great deal of information. Mysteries remain however, such as an explanation for the surprisingly slow rate at which seismic waves travel through earth’s solid inner core.

“The Earth's deep interior still holds many mysteries that scientists are trying to unravel,” explains one of the co-authors. “The proposed mineral models for the inner core have always shown a faster wave speed than that observed in seismic data. This mismatch has given rise to several complex theories about the state and evolution of the Earth's core.”3

Mao’s team used X-ray imaging to observe the way laser-heated iron between magnesium silicate mineral grains behaves when the grains are squeezed to intense pressures between tiny diamond tips. They showed that the molten iron metal changes its properties at the extreme pressure and temperature thought to exist in the lower mantle. For instance, at temperatures just short of the melting temperature of iron in the inner core, solid iron appears to weaken, becoming less stiff. This would dramatically slow seismic waves transmitted through the core, as is observed. The next step in the team’s work will be to examine the effects of other elements, such as those believed to be alloyed with iron in our core, to see how they would affect the core’s response to seismic waves.4

In trying to figure out how iron could travel through the solid lower mantle to reach the earth’s core under the circumstances many secular scientists suppose formed the earth, the Stanford team suggests the newly discovered properties of iron and its alloys hold the answer. If iron were located deep in the mantle, once the pressure and temperature crossed a critical threshold, it would form rivulets that could coalesce and flow through the solid mantle. This process is called percolation.

“We know that Earth today has a core and a mantle that are differentiated. With improving technology, we can look at different mechanisms of how this came to be in a new light,” says Mao. “In order for percolation to be efficient, the molten iron needs to be able to form continuous channels through the solid. Scientists had said this theory wasn't possible, but now we're saying—under certain conditions that we know exist in the planet—it could happen. So, this brings back another possibility for how the core might have formed.”

“Our results indicate that percolation could be a viable mechanism of core formation at Earth’s lower mantle conditions,”5 the authors write. They specify not just the conditions under which percolation could happen but also specify a complex multistage series of “evolving conditions” that would have to have occurred to allow the iron to end up in the right place for percolation to become a dominant process.6

Good As Far As It Goes

The Stanford’s team discovery of the conditions that explain the unusual seismic properties of earth’s core is an elegant bit of research that gives a good clue to the conditions under the earth. However, the team’s observations fail to explain how earth formed.

There is no question that the experiments involved sophisticated technology in a clever piece of work. As the paper says, these results demonstrate that Fe-Ni-S liquid can form an interconnected network in silicate perovskite [a magnesium silicate mineral] grain boundaries at pressures above 50 GPa [about 7,250 pounds per square inch (psi)]. But that’s where the repeatable, testable science ends.

No scientist was present, however, to witness these claimed unobserved events in the supposed distant past. On the other hand, the Creator God of the Bible, who was present when He created the earth, and who doesn’t lie, has told us in His Word, the Bible, that when He spoke the earth into existence just over 6,000 years ago the earth was covered with water, rather than an ocean of molten rock (magma). Furthermore, even though God doesn’t describe for us what was under the water on that first day of earth history, He does tell us that two days later He established the dry land after separating the waters into one place He called seas. By that description God is clearly saying that by that third day, the earth’s core and mantle were in place by His creative design, rather than by millions of years of slow random percolation of molten iron metal squeezed through the silicate mantle.

God’s Word is the yardstick by which we must judge fallible man’s claims. We appreciate God’s marvelous design of the earth’s core, and this research has provided a clue to explain more about that design. But understanding the properties of the core’s constituents does not—and cannot—reveal how the earth originated in a past observed by no one but the God who created it.