Does the chimpanzee ability to see-a-snake and sound-a-signal recapitulate the evolutionary underpinnings of human language?

Chimpanzees use particular warning calls to warn their friends of approaching snakes. They keep up the alarm until the danger is past, and they do not make those calls when they are alone. Because this distinction indicates chimps intend to warn others, researchers note that a chimp alarm is much more significant than an instinctive fear response. Linguists consider “intentionality” to be a characteristic of language. Evolutionary linguists therefore report in PLOS ONE that chimp calls may be a clue to the evolutionary origin of human language. 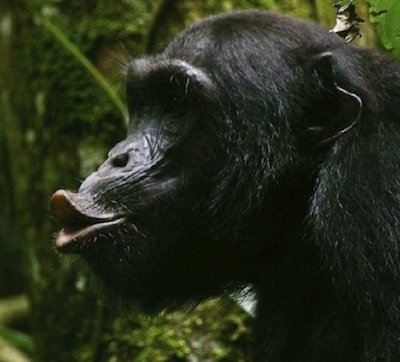 Chimps warn other chimps of danger using particular warning calls. They keep sounding the danger signal until their compatriots are all safe. Evolutionary researchers believe this behavior is related to the evolutionary origin of more advanced human linguistic capacity. Image by Anne Schel, via Smithsonian.

In “Chimpanzee Alarm Call Production Meets Key Criteria for Intentionality,” Anne Schel and colleagues write, “Understanding the evolutionary origins of language, one of humankind’s defining features, is a challenge that attracts considerable multidisciplinary research effort.”1 Her team now calls into question one of the currently popular “theories” of evolutionary linguistics.

Linguistic literature in recent months has proclaimed that human language began when primitive proto-people began to use gestures to communicate with each other. We discussed the flimsy way a human toddler’s growing ability to communicate was recently compared to chimpanzee gestures in order to craft a case for this “gestural theory” of evolutionary language acquisition in “Show and Tell: What Can Chimps Tell Us?”

Of Stuffed Snakes and Chimps

Schel’s international team of researchers studied recordings of chimpanzees in Uganda’s Budongo Forest Reserve and observed their reactions to a stuffed python. As chimps got within a couple of meters of the python, researchers used a hidden fishing line to move the snake from its leafy hiding place toward chimp.

Chimpanzees make several alarm noises. A “soft huu” is a brief low-pitched sound that cannot be heard well from a distance. An “alarm huu” is louder, lasts longer, and is higher pitched. A “waa bark” is considerably louder and longer, begins abruptly at a low frequency and modulates to a higher frequency, sounding to humans like “aa,” “aow,” or “aoo.” (You may listen to chimp calls at “Chimpanzees Intentionally Warn Their Friends About Danger.”) The team objectively measured the type and duration of calls in relation to whether the chimps were alone or with others. They also examined the effect of the chimpanzees’ social relationships on the type and duration of calls.

If chimps kept on calling until all other chimps were safe, the researchers interpreted the alarm as an intentional warning and therefore a sort of primordial language. Chimps tended to alternate their gaze between the snake and their audience if they “intended” to issue a warning. The “soft huu” was an unpredictable, nonspecific, and immediate response to seeing a snake. But chimps reserved their “alarm huus” and “waa barks” for situations when other chimps were around. They called louder and longer when chimp-friends, social partners, or dominant chimps were part of the audience to be protected. And they tended to keep calling until “important individuals who are valuable to them” were safe.

Motive to Their Method

The researchers acknowledged the need to assess alternative motives. They write, “It is possible that chimpanzees have a selfish motivation and call to recruit others in order to obtain support or comfort in a stressful and dangerous situation.”2 Many great ape gestures seem to have just such a purpose. However, given that the chimps would stop calling the alarm when other chimps were out of danger, they believe they’ve made a good case for chimp “intentionality.”

On the basis of their analysis, the team challenges the gestural theory and concludes, “Our results undermine a central argument of gestural theories of language evolution and instead support a multimodal origin of human language.”3 They do not disregard the intentionality of chimp gestures or deny their place in language evolution, but they maintain that both gestures and vocalizations were important for human evolutionary acquisition of language.

Evolutionists maintain that everything has an evolutionary origin, even language. Anything that apes appear to have in common with humans is snatched up as evidence of our shared ancestry and heralded as the evolutionary explanation for our more advanced or interesting qualities, like the ability to empathize with others or the tendency to have a mid-life crisis. Believing that humans and great apes evolved from a common ancestor, linguists and anthropologists who have an evolutionary worldview look to apes for clues in what they interpret as vestiges of linguistic ability that never really got off the ground. The apparent chimp intention to use these alarm calls for goal-directed communication are, they believe, just such a clue.

Like pointing and reaching for a desired object or holding up their arms to be picked up—gestures used by young chimpanzees and human children—these chimp vocalizations seem intended to communicate with the goal of accomplishing something. But do either of these qualify as a primitive form of language? And if so, does it help us understand how humans acquired one of their most unique and exclusive abilities, the ability to hear, understand, and communicate using the spoken word?

Many animals from fish to birds to elephants use sounds and gestures to indicate what they want to happen. However, as Dr. John Oller, Jr.,4 an expert in the field of language acquisition and communication disorders, commented when discussing the chimp-human gestural study last summer, “No one would claim that the dog is an immediate ancestor of humans or that barking preceded speech.”5 But because evolutionists have already made up their minds that humans evolved from ape-like ancestors, chimpanzee gestures and vocalization are treated as having special evolutionary significance.

There is a fundamental difference between animal communication and human language.

There is a fundamental difference between animal communication and human language, however. Humans use symbolic language to communicate abstract and original thoughts. And abstract thoughts exist in a young child’s head before the child develops the ability to communicate those thoughts using language (Matthew 15:18, sadly for humanity, has already told us just that!). As Dr. Oller explained, “Abstract concepts precede the use of words. . . . Children have to have the abstract ideas, the symbolic wherewithal first, before any language acquisition occurs.”6 Dr. Oller further noted that Noam Chomsky (the father of modern linguistics) “has even argued that all the concepts for language have to be in place before any language acquisition can occur.”7 Humans did not become human by learning to speak; humans have abstract and original thoughts to communicate using language and the intrinsic ability to use language because we are human. Intending to achieve a goal is certainly a characteristic of language, but that does not mean that all goal-directed vocalizations or gestures are evolutionary steps on the road to linguistic capacity.

We actually have in the Bible a historical record of the history of language provided by our Creator. When God created Adam, He instructed Adam to name animals and warned him not to eat of a certain tree. Man was thus created with language and intelligence and did not have to evolve the ability to speak and think. God’s Word also informs us that God created man and woman in His own image (Genesis 1:26–27), unlike any animals, explaining why only humans of all the living things on earth are able to communicate creative, original, abstract thoughts using language.