Lots more loris species than previously thought, all sweating out their survival.

A primate with a venomous bite is definitely an oddity, but it turns out there are more species of the Asian slow loris—the primate that protects itself this way—than previously thought. The loris is a lemur-like nocturnal primate with a nasty noxious nip that effectively discourages parasites and predators.

Lemurs and lorises are in a different primate suborder from monkeys and apes, though all are well-designed for their arboreal acrobatics. Anatomically, lemurs and lorises have larger orbits, relatively smaller brains, and more highly developed senses of smell and hearing than monkeys. There are two genuses of lorises—the slender lorises (Loris genus) and the slow lorises (Nycticebus genus). Until recently, the slow loris was thought to only have one living species. Researchers Anna Nekaris and Rachel Munds report in the American Journal of Primatology that there are actually four species distinguishable by their facial markings. One of these, Nycticebus kayan, is a new discovery. 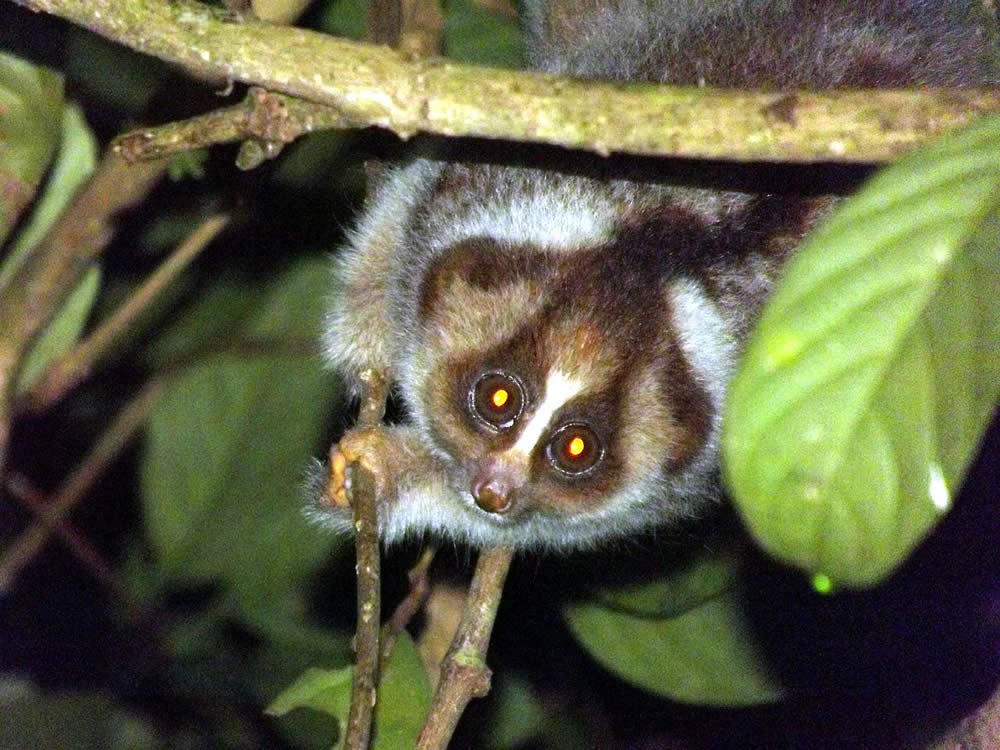 This newly discovered species of slow loris, Nycticebus kayan, is native to Borneo. Slow lorises as well as the slender loris are the only primates known to use venom. The poison in the loris bite can kill leeches, repel large predators, cause a severe allergic reaction in its enemies, and produce a necrotic, festering bite wound that heals very slowly. (Check out the short video about this at www.bbc.co.uk.) Depletion of the apparently diet-derived toxin may contribute to failure in efforts to return captured lorises to the wild. Image courtesy of WikiMedia Commons. 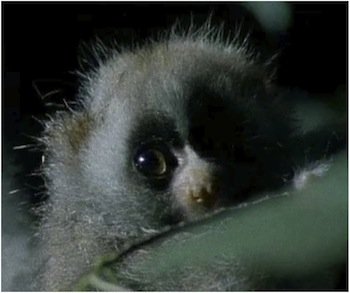 This baby loris just received a bath in toxic spit. Its “mum” combed the toxic sweat mixed with her saliva through the baby’s fur before heading out for a night of hunting. Watch the video of this baby’s preparation for a night alone in the nest as well as a whole series of videos detailing the life of the loris at “Jungle Gremlins of Java” www.bbc.co.uk and www.bbc.co.uk Image credit: BBC at www.bbc.co.uk. 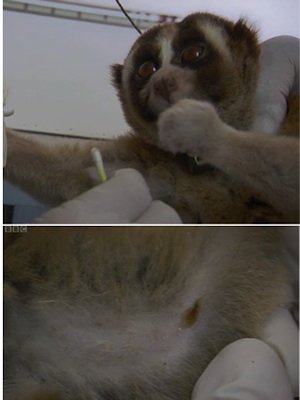 This loris in Dr. Anna Nekaris’s laboratory is supplying a sample of his dark oily brown sweat containing steroid alkaloids for her research. She swabs up some of the oil as it is secreted from a tiny gland near the elbow. (A dark drop is visible in the second photo.) Be sure to watch the video at www.bbc.co.uk to see the loris’s defensive posture during which it laps up some poisonous sweatdrops in preparation for inflicting a discouraging bite. Image credit: BBC at www.bbc.co.uk.

The slow loris is well named for its slow and stealthy movements through the night forests. With a varied diet including fruit, tree gum, small animals, and a host of creepy crawlies, the loris is equipped with a unique ability that aids in its efforts to protect its territory from rivals, repel nasty parasites, and discourage all but the boldest predators. Unfortunately, the loris—being slow and cute—is not so successful at repelling humans engaged in illegal animal trafficking, though the bite it leaves may be long in healing. New knowledge that there are multiple species of slow lorises in addition to an increasing understanding of how loris toxin can be depleted in captivity reveals why attempts to re-patriate rescued animals (those whose teeth haven’t been yanked out) back to the wild are usually unsuccessful.

The loris secretes a steroid alkaloid poison through an apocrine sweat gland near its elbow. This “brachial oil,” when mixed with its saliva, can kill leeches and send hungry bears searching for something more savory. Researchers think the loris may get its supply of poison from the “grisly grubs”1 it eats. (We see a similar phenomenon in poison dart tree frogs, which are only toxic when they consume the diet available to them in the wild.) The loris greedily consumes millipedes and many such creatures other animals avoid. Millipedes and ants contain chemical toxins similar to those in the loris. The loris itself is immune to the toxic effects of its snacks and its own sweat. A mother loris typically combs her toxin-rich saliva through the fur of her baby before she embarks on a night of hunting, leaving the baby safely in the nest. 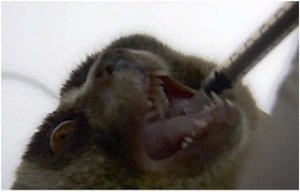 This loris’s poison is activated to its full toxicity when mixed with saliva, so Dr. Nekaris also collects some loris saliva with a syringe. She will mix the saliva and the brachial oil to make a natural pesticide that is also abhorrent to large predators. See www.bbc.co.uk for a video-log of the leech test. Image credit: BBC at www.bbc.co.uk. 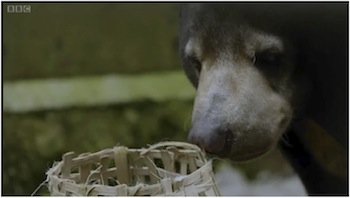 This hungry sun bear, a nocturnal predator, is all ready for a lunch of loris. Watch the video at www.bbc.co.uk to see how she reacts to a swab of loris “sweat ‘n spit” concealed in the basket. Image credit: BBC at www.bbc.co.uk.

Creationist biologists researching various “created kinds” of animals believe lorises constitute one such created kind. The diversity of loris species therefore developed in the years since the global Flood. Speciation, an observable phenomenal, is variation within a created kind and is not the same thing as the evolution of new kinds of creatures, which has never been observed.

The loris’s ability to take advantage of toxic substances in its diet to deal with threats is a good example of the defense structures that developed after man’s sin brought suffering and death into the world of people and animals. (Read more about it at “How Did Defense/Attack Structures Come About?” and “Unexpectedly Vegetarian Animals—What Does it Mean?”) Study of slow loris venom should increase not only our understanding of predator-prey interactions but ironically—as with the study of mamba venom—but may also lead to pharmacological advances.2