Photo by Mark Timberlake, via Unsplash. 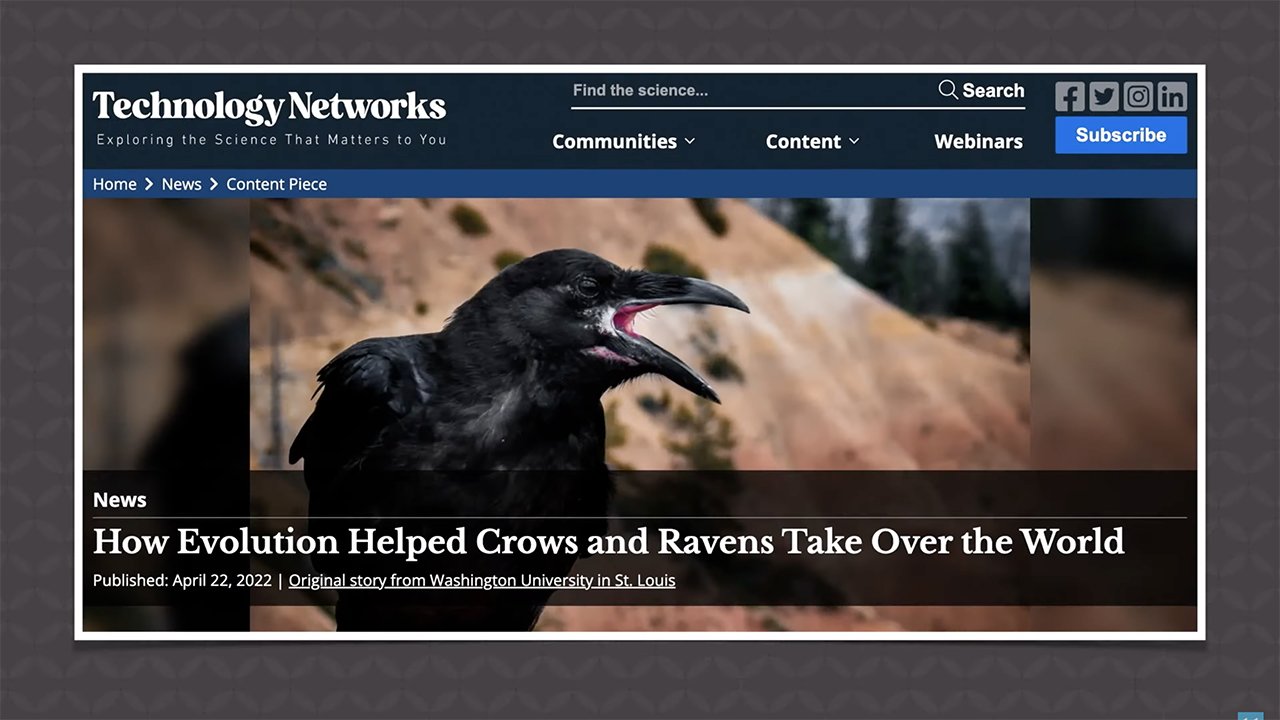 Once upon a midnight dreary, while I pondered, weak and weary, over many a quaint and curious volume of forgotten lore—I ran across this article, which immediately reminded me of the providence of God on post-flood animals. The title of the article predictably attributes the geographic success of ravens and crows to “evolution,” but in reality, what is discussed is adaptation, not molecules-to-man evolution.

Ravens and crows have a worldwide distribution.

Ravens and crows (and there really is not much difference between them except that ravens are generally larger and crows typically have a bit more color variability) have a worldwide distribution. Ravens are scattered all over the northern hemisphere, and crows inhabit both the northern and southern hemispheres. The news article and the journal article it was summarizing were attempting to figure out why ravens and crows were so successful. Ravens are in a family of birds (think biblical kind) that also includes crows, rooks, jackdaws, jays, magpies, and others.

But examining living and museum specimens, the researchers in the Nature paper found that ravens and crows have longer wing lengths, bigger body sizes, and bigger relative brain sizes even among other corvids. They also pointed out that ravens and crows (genus Corvus) have different color variations (not all are black), based on their environment (some are black and white, some are blue and white, or mottled), and are known to use tools and even drop rocks on potential nest predators.

According to the news article,

Longer wings means higher flying capacities that allowed the birds to disperse across the world. Big brains relative to their bodies suggest that ancestral crows and ravens were behaviorally flexible. They were smarter than other Corvids and, therefore, able to figure out how to live in a new environment, increasing their chances of survival. Their bigger body size also gave them a competitive advantage over smaller species, helping them establish in a new place.

But another factor that has really aided their worldwide distribution is their diet. Ravens and crows will eat anything, including other birds’ nestlings or their eggs, fruits, nuts, seeds, mollusks, crustaceans, earthworms, frogs, eggs, mice, carrion, and will even forage through human garbage. We know that all air-breathing, terrestrial-based biblical kinds were taken onto the ark by Noah. And as I read the article, what stood out to me was that a raven was the first animal to leave the ark (Genesis 8:6-7). And the implication from the biblical account is that, by the time of the flood, the raven was omnivorous and so had plenty of food (like carrion, crustaceans, mollusks, or earthworms) to survive outside the ark.

We also know that God created a great variety of genetic information into each kind so that they could adapt to their environment and branch out into different species.

We also know that God created a great variety of genetic information into each kind so that they could adapt to their environment and branch out into different species. Just as we see wolves, coyotes, and jackals (from the original dog kind), and lions, tigers, and pumas (from the original cat kind), so the corvid kind speciated out into ravens, crows, jays, etc. But speciation usually involves a loss of genetic information, as each species becomes specialized for its environment, and mutations occur within the genome. This is not the direction needed for amoeba-to-astronaut evolution, even though the news articles tout that angle.

It is also possible that the released ark raven had an early advantage over the rest of the animals, which were told to be fruitful and multiply when they left the ark (Genesis 8:17). Now we don’t know if that raven was a male or female, but since the dove Noah later sent out was female, it seems reasonable to think the raven was too. If she was pregnant when she left the ark, then 18–21 days later she might have laid her eggs. Females lay between three and seven eggs and don’t rely upon the male for brooding as some birds do. However, ravens typically mate for life, so the male would have been sure to find her when he was released (around 100 days later). But even if that’s not the case, we know that ravens and crows are common all across their vast ranges and can rapidly reproduce, with very little concern about predation.

Now, let me give you a quote from the journal article and then interpret it with our biblical glasses on.

Our analyses show that in ~10 Ma, crows and ravens experienced a massive geographic expansion that allowed them to reoccupy and even surpass the already broad climatic niche of other Corvidae. In parallel with this geographic and niche expansion, Corvus experienced accelerated rates of species diversification accompanied by a remarkable fast expansion of the morphospace. Corvus for instance exhibits the greatest amount of body size variation and the highest rates of body size evolution in Corvidae. In terms of beak shape, crows and ravens not only reproduced many of the shapes already present in their family but also evolved entirely new beak types in short time periods (e.g., Corvus crassirostris and Corvus moneduloides). Because these morphological traits have a well-established adaptive basis, our findings suggest that the global radiation of crows and ravens cannot merely be understood as the result of dispersal and (non-adaptive) allopatric speciation, but also of considerable adaptive divergence driven by ecological factors.

Biblical worldview: Just after the ravens left Noah’s ark (about 4,400 years ago) and about the time of the subsequent ice age, they rapidly speciated, expanded their range worldwide, and became specialized in (or adapted to) the varying environments they settled in. Some grew larger or smaller, and some had beak size (and even beak color) changes based on the created genetic diversity in the biblical corvid kind. So, does this equate to evolution? No, but it fits perfectly with the biblical account of the global flood, which provided brand-new environments and geographic ranges to colonize, and God’s command concerning all the animals that were on the ark:

So, does speciation equate to evolution? (Certainly students in public schools are taught that it does!) Quoth the raven–nevermore!

This item was discussed today on Answers News with cohosts Dr. Georgia Purdom, Dr. Gabriela Haynes, and Tim Chaffey. Answers News is our twice-weekly news program filmed live before a studio audience and broadcast on my Facebook page and the Answers in Genesis Facebook page. We also covered the following topics:

Watch the entire episode of Answers News for May 9, 2022.