Venomous variations of nontoxic proteins and a potent painkiller in mamba venom point to variability available within created kinds.

The deadly black mamba may have in its venom the secret to a new generation of potent painkillers. French pharmacologist Dr. Eric Lingueglia and colleagues report in Nature1 that they have isolated chemicals they call mambalgins from mamba venom. Tested in mice, which possess pain physiology similar to humans, mambalgins are as powerful as morphine. Unlike morphine, mambalgins don’t act through the usual narcotic pathways, do not suppress respiration, do not induce tolerance, and probably lack narcotic side effects and addictive potential. And unlike other components of mamba venom, mambalgins aren’t deadly.

“When it was tested in mice, the analgesia was as strong as morphine, but you don't have most of the side-effects,” Dr. Lingueglia explains. “It is the very first stage, of course, and it is difficult to tell if it will be a painkiller in humans or not. A lot more work still needs to be done in animals.” Encouraging, though, is the fact that tests on human cells suggest that they will respond as those in mice.

Snake venom has long been a valuable research tool. Toxins attack nerve function in different ways, so venom analysis has helped unravel the way nerve cell ion channels function. The discovery of mambalgins should add to our knowledge of how pain works, providing better understanding of the cellular targets for new pharmaceuticals. In addition, the mambalgins themselves may morph into new wonder drugs for pain control. 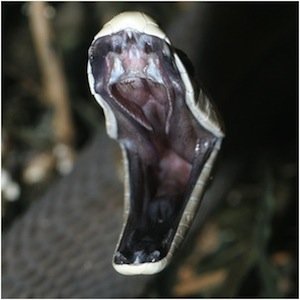 The venom about to be released from this black mamba is a rapid-acting lethal mixture of neurotoxins and cardiotoxins. But researchers in France have discovered additional ingredients of unknown use to the snake but potentially of great use to mankind. Image by Tad Arensmeier, via Wikipedia.

Dr. Nicholas Casewell, an expert in snake venom at Liverpool’s School of Tropical Medicine, recently published a study2 pointing to the potential of venom as a drug source. Previous genomic analysis of snake venom has demonstrated that components are produced by small variations and duplications of the genes for physiologically useful nontoxic snake proteins.3 Building on that research, Casewell and colleagues suspect a dynamic process in which variations in existing genomic material can lead to toxic products as well as the reverse, making physiologically useful nontoxic molecules.

Casewell says, “Our results demonstrate that the evolution of venoms is a really complex process. The venom gland of snakes appears to be a melting pot for evolving new functions for molecules, some of which are retained in venom for killing prey, while others go on to serve new functions in other tissues in the body.” Because of this, he suggests pharmacologists may find a wellspring of potent but harmless versions of toxic molecules elsewhere in snakes’ bodies.

“Many snake venom toxins target the same physiological pathways that doctors would like to target to treat a variety of medical conditions,” explains coauthor Dr. Wolfgang Wüster of Bangor University. “Understanding how toxins can be tamed into harmless physiological proteins may aid development of cures from venom.” This French discovery appearing on the heels of these prophetic pronouncements may prove to be a case in point. Casewell says of the mambalgin discovery, “It's very exciting, it's a really great example of drugs from venom, we're talking about an entirely new class of analgesics.”

From an evolutionary point of view, the inclusion of a painkiller in deadly, fast-acting venom does not make a lot of sense.

From an evolutionary point of view, the inclusion of a painkiller in deadly, fast-acting venom does not make a lot of sense. Indeed, having found no such substance in 50 other snake venoms, Dr. Lingueglia said the discovery was “really surprising.” From a biblical perspective these discoveries make sense.

When God created all kinds of animals and plants about 6,000 years ago, He created them to reproduce after their kinds and provided them with the genetic potential to vary. Yet He also created them in a perfect and nonviolent uncursed world devoid of animal (and human) death.4 After Adam’s sin brought a divine curse upon all of creation, many “defense and attack structures” developed. In the case of venom, discoveries such as these demonstrate that new genetic information was not needed in order to develop venom.

Evolutionists compare this scenario to Lenski’s claims concerning the evolution of citrate utilization in E. coli, saying, “It’s common for genes to get duplicated, and for the new copy to be rewired for a new job. Snake venom, to pick one example, also evolved when genes were accidentally copied and then rewired.”5 As in the case of Lenski’s discovery, however, none of these discoveries demonstrate acquisition of new genetic information or evolution of more complex kinds of organisms. Rather, they highlight the variability that can be achieved within created kinds of organisms. About 6,000 years ago God cursed a serpent above all other creatures (Genesis 3:14–15) for the role it played in the Fall of man. How ironic it would be if the deadly mamba today contains the key to easing the curse of pain for many.

Previous Article News to Note, October 6, 2012 Next Article The First Amendment and Abortion