The fearsome piranha’s vegetarian version uses its teeth to shred plants, not meat.

Chances are your child’s picture book of “scary animals” features a piranha, and the last thing you expected to hear about in the “Halloween”-month news was a vegetarian piranha. But scientists have found one, and it is completely herbivorous! The World Wildlife Fund’s list of 400 recently discovered species native to the Amazon rainforest includes, according to a WWF press release,1 a vegetarian piranha called Tometes camunani.

Even if you know that piranhas don’t make a habit of lurking in hopes of a human meal in South American rivers or devouring cattle in minutes,2 who can forget the gruesome displays in Aquariums and nightmarish-though-exaggerated scenes in movies? Piranhas do at times injure and kill humans, but attacks tend to happen under crowded conditions when water levels are low. And while signs warning of deadly piranhas posted near some Brazilian rivers are quite justified, there’ll be no trouble from a piranha named Tometes camunani! No human toes or even fish are on T. camunani’s menu!

Living in the rocky rapids of tributaries draining the upper basin of the Trombetas River, itself a tributary of the Amazon River, Tometes camunani is considered a piranha, not a pacu—a vegetarian fish often mistaken for the piranha and even sold as a “vegetarian piranha.”3 The pacu has very different teeth from the piranha, possessing a double row of squared-off teeth ideally adapted for its diet of vegetation such as seeds that fall into the water. The typical piranha, instead, has single rows of six razor-sharp triangular teeth that are even interlocked, allowing one species, the black piranha, to generate the most powerful bite in the animal kingdom (relative to its weight). 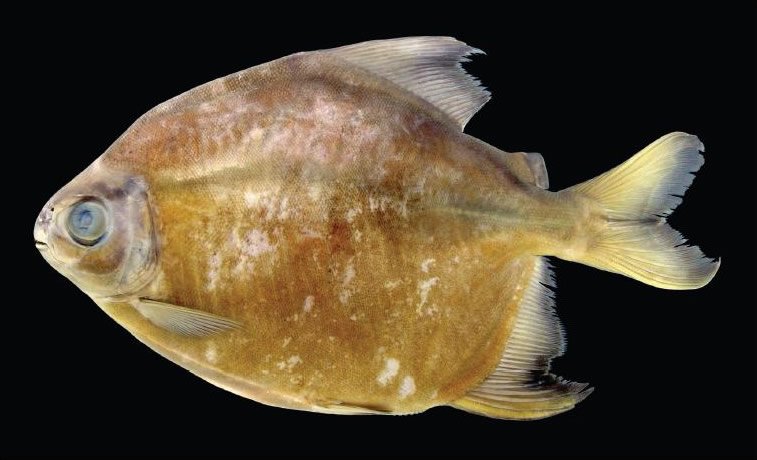 This is a male vegetarian piranha, Tometes camunani. Found exclusively in rapidly moving water in the Amazon river basin, Tometes camunani live on riverweed, grasses, and seeds of aquatic plants native to its habitat. Natives catch them using fruit from the camu-camu tree for bait. Image by Tommaso Giarrizzo, via SciELO.4 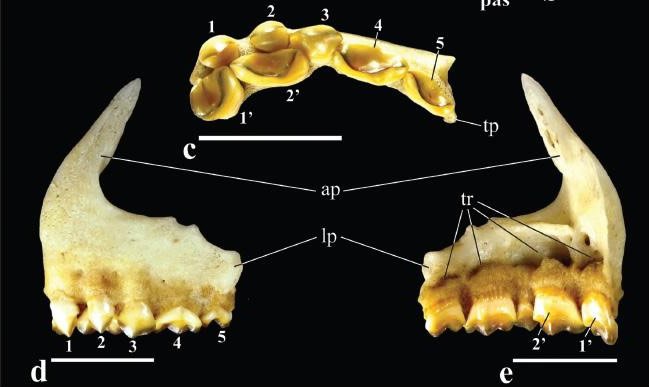 These are photos of the left portion of a Tometes camunani jawbone and teeth, from various angles (c-viewing the teeth surfaces, d-from the front, e-from inside the mouth). Teeth labeled 1 through 5 are fairly sharp, and two additional teeth (1’ and 2’) are behind the two front-most teeth. These piranhas do not have two rows of squared off teeth like vegetable-eating pacus, but they nevertheless are well-equipped to nip off bits of riverweed and to munch on seeds of aquatic plants. (scale bar = 10 mm) Image via SciELO.5 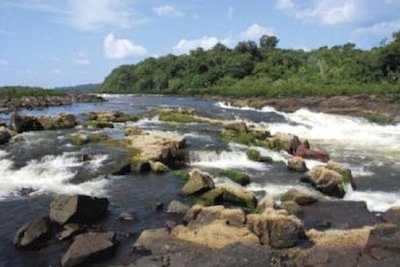 Riverweed plants cling to rocks in the clear rapids of tributaries in the upper basin of the rio Trombetas in Pará, Brazil. This region is the exclusive habitat of a recently discovered vegetarian piranha. Image by D. Bastos, via SciELO.6

Tometes species are habitat “hyperspecific,”7 being perfectly adapted for their own small corner of our world. A planned hydroelectric dam in the region where this fish was discovered may destroy the habitat that supports Tometes camunani’s veggie-lifestyle. These vegetarian piranhas are found exclusively in the stretches of river with “swift-flowing rapids and rocky outcrops in clear water.”8 The World Wildlife Fund (WWF) Living Amazon Initiative published their list of hundreds of Amazon species discovered between 2010 and 2013 to call attention to them as “a unique natural heritage that we need to conserve,” adding, “This means protecting their home—the amazing Amazon rainforest—which is under threat from deforestation and dam development.”9

Evolutionary scientists believe that piranhas evolved from an ancestral fish, possibly an ancestor shared with pacus, about 8 to 10 million years ago. The extinct Megapiranha in the fossil record, 3 feet long, is quadruple the size of modern piranhas. The Megapiranha’s teeth differed from both today’s piranhas and pacus. Evolutionary scientists consider the Megapiranha’s teeth to be a transitional form between its piranha and pacu descendants. Ichthyologist John Lundburg, who in 2009 studied the Megapiranha’s fossilized jaw, describes the teeth as an intermediate arrangement like a zig-zag in which two rows were being compressed, saying, “It almost looks like the teeth are migrating from the second row into the first row.”10 Also, Megapiranha had seven sharp teeth in each quarter of its jaw, not six like typical piranhas.

“One of the teeth may have been lost,” Lundberg said. “Or two of the original seven may have fused together over evolutionary time. It's an unanswered question.”11 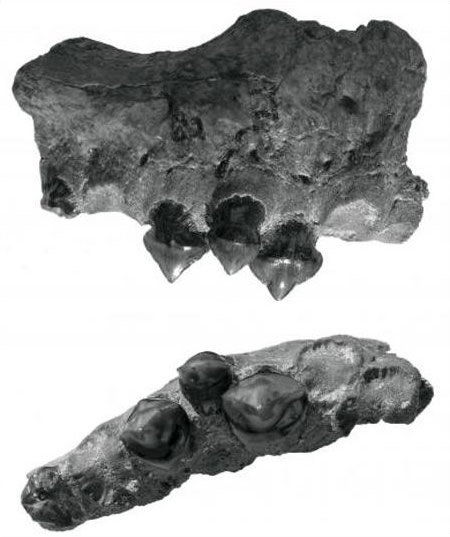 Could these teeth from the meter-long Megapiranha paranensis fossil, arranged in a zig-zag pattern, represent the teeth in the ancestor of today’s piranhas, which usually have teeth arranged single file? Very likely. When discovered in 2009, Megapiranha was hailed as the ancestral form that represented a transition to modern piranhas and the vegetarian pacu fish with a double row of squared-off teeth. Of course there is nothing about this fish that makes it an evolutionary transitional form, in the molecules-to-man sense. It and the modern piranha varieties and pacu may well be descended from the same ancestral kind of fish created by God about 6,000 years ago on the 5th day of Creation week. Whatever the original piranha-like kind of fish were like, however, we can be confident on the basis of God’s Word that they were not carnivorous in the beginning. Image by Carolina State University, via Science.12

When it comes to the number of teeth a piranha has, however, we don’t need to look back into evolutionary time to find variation. We only have to look at modern varieties. Even among the four species of the Tometes genus, which are all characterized by their tooth shape—somewhat chisel-like, wider than thick, like incisors—the normal number varies from the “piranha-norm” of “six-per-section.” Tometes makue have anywhere from six to eleven, and Tometes lebaili have seven or eight.13 The vegetarian Tometes camunani has five sharp incisor-like teeth arranged in each single row with two additional, not-so-sharp teeth behind them.14 (See the illustration.)

The number and shape of the teeth piranhas have varies even within a species. Such variation within species—and “genus” and even taxonomic “family”—is exactly what we expect from the biblical truth that God created all kinds of creatures to reproduce with diversity within their created kinds. Over time, natural selection, mutations, and other mechanisms have resulted in the alterations that have decreased and degenerated the genetic information originally created. However, the resulting variations, some of which are well-adapted for certain conditions, do not increase genetic information or produce new more complex kinds of creatures. Such variation within created kinds is not the same thing as evolution into different, more complex kinds of organisms. Whatever the original created kind of fish today’s piranhas, and possible pacus, descended from, we do not need either molecules-to-man evolution or millions of years of “evolutionary time” to explain their varieties, as variation within kinds can be observed occurring quite quickly in the present.

Piranhas tend to eat whatever is available, and the variability in teeth seen in Tometes camunani with its extra two teeth behind the first row highlights the way genetic diversity within a particular kind of creature can facilitate adaptation to its environment. And geographic isolation of varieties well-adapted to local conditions is a great way to produce new species, a process we can observe in real time.

Thus, seeing we do not need evolutionary time or molecules-to-man evolution to explain the variations in piranha teeth, should we be surprised at finding a nominally ferocious carnivore in a strictly vegetarian variety? Not at all. Whatever the original “piranha-kind” was like, we can be confident it was herbivorous.

Nature did not become “red in tooth and claw” until the curse of death was brought into the world by man’s rebellion against God. This phrase comes to us through the poetry of Alfred Lord Tennyson who used it in his elegy In Memoriam A. H. H., 1850, to describe the apparent conflict between our loving God and the suffering seen in the world around us. Canto 56 describes the man

Who trusted God was love indeed
And love Creation’s final law
Tho’ Nature, red in tooth and claw
With ravine, shriek’d against his creed.

The Bible makes it clear that God created the world “very good” (Genesis 1:31), that man’s sin brought the curse of suffering (Romans 8:20–24) and death (Romans 5:12) into the world, and that the love of God through Jesus Christ is the solution (Romans 5:14–21). Thus, when we hear of “unexpectedly vegetarian” animals, we might take a moment to ponder the world God originally created and the violence human sin brought into that world, not just for animals but for people too. But while this fish might call to mind a better world of the past—though certainly not an evolutionary past—it might also remind us that in the future our Lord Jesus Christ will return and destroy death and make a place where all who are saved through His grace can live forever without suffering or fear.

Previous Article Empathy or Imitation—Do Chimps Yawn Because They Care? Next Article Scorpion Venom Is No Match for Mighty Mouse