Do Drinking Giraffes Have Headaches?

Charles Darwin wrote in his Origin of Species that he had no difficulty in imagining that a long drought could have caused some hypothetical short-necked ancestors of the giraffe to stretch their necks continually higher to reach the diminishing supply of leaves. He had no fossil evidence, of course, for such an evolutionary history. He also apparently was not aware of certain problems peculiar to giraffes which make his easy assumption of giraffe evolution even more difficult to accept.

The giraffe heart is probably the most powerful in the animal kingdom, because about double normal pressure is required to pump blood up that long neck to the brain. But the brain is a very delicate structure which cannot stand high blood pressure. What happens when the giraffe bends down to take a drink? Does he ‘blow his mind’? Fortunately, three design features have been included in the giraffe to control this and related problems.

In the first place, the giraffe must spread his front legs apart in order to drink comfortably. This lowers the level of the heart somewhat and so reduces the difference in height from the heart to the head of the drinking animal. The result is that excess pressure in the brain is less than it would be if the legs were kept straight. 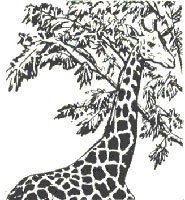 Second, the giraffe has in his jugular veins a series of one-way check valves which immediately close as the head is lowered, thus preventing blood from flowing back down into the brain.

But what of the blood flow through the carotid artery from the heart to the brain?

A third design feature is the ‘wonder net’, a spongy tissue filled with numerous small blood vessels located near the base of the brain. The arterial blood first flows through this net of vessels before it reaches the brain. It is believed that when the animal stoops to drink, the wonder net in some way controls the blood flow so that the full pressure is not exerted on the brain.

Scientists also believe that probably the cerebrospinal fluid which bathes the brain and spinal column produces a counter-pressure which prevents rupture or leakage from the brain capillaries. The effect is similar to that of a G-suit worn by fighter pilots and astronauts. The G-suit exerts pressure on the body and legs of the wearer under high acceleration and prevents blackout. Leakage from the capillaries in the giraffe’s legs, due to high blood pressure, is also probably prevented by a similar pressure of the tissue fluid outside the cells. In addition, the walls of the giraffe’s arteries are thicker than those in any other mammal.

Had Darwin known all these problems peculiar to giraffes, it surely would have given him a headache.

Some careful investigations and measurements of blood pressure have recently been made in live giraffes in action. However, the exact manner in which these various factors operate to enable the strange creature to live has still not been clearly demonstrated. Nevertheless, the giraffe is a great success. When he has finished his drink he stands up, the check valves open, the effects of the wonder net and the various counter-pressure mechanisms relax, and all is well. Not even a headache!