Creationists develop models like these . . . by studying the facts of God’s Word and God’s world.

In the beginning, the everlasting God spoke both time and the universe into existence. At first, the earth was without form and unfilled. Over three days, God gave form to the sky, sea, and land. Then, on the following three days, God filled these voids with abundant reminders of His glory.

Included in the original material of creation was water, out of which God created the earth. This unique planet had just the right mix of chemicals and the right mass to hold a life-sustaining atmosphere.

God then raised a landmass, similar to Rodinia (see below). As the waters rushed off the just-created continent, they scoured the surface and dumped trillions of tons of dirt at the edges of the continent, up to thirty miles deep.

God created all sorts of bacteria to convert chemicals into useable forms and make them available to plants and animals. He stationed these bacteria in every corner of the globe, from the deepest parts of the crust to the sea and sky. 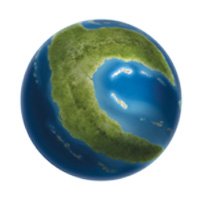 Yes, this is earth—the earth that God originally created was vastly different from today. Before the Flood, this supercontinent, now called Rodinia, was home to many exotic plants and animals that are no longer seen except in the fossil record.

God then filled the land with billions of energy factories, known as plants. From the first day of their existence, these plants were fully functional. In each plant hundreds of chemical processes ran in perfect symphony, harnessing the sun’s energy to provide food for living things.

A bewildering variety of plants made up niches all over the earth. In the DNA of each “kind” of plant was a rich storehouse of instructions to produce a variety of offspring. For example, within the first grasses was information to produce wheat, rye, rice, bamboo, and fescue. By God’s command, the earth was bursting with ripe fruit and grains, ready to satisfy the needs of living things.

On Day Four, God began the process of “filling” the universe. By His command a vast variety of astronomical objects burst into being, including comets, moons, planets, and stars. Each object was unique, beautiful, and fully functional.

God placed the sun at just the right distance from earth to keep our planet warm. He set a moon in earth’s orbit with the right mass and distance for tides to cleanse the seas. As the earth spins, the sun and stars rise and set with clockwork precision, marking the passage of time for living things.

At last, God was ready to introduce life into creation. He filled the ocean, sky, and land. Despite their differences, living things share many things in common—chemicals, genetic codes, and cell structures—to help them coexist in the same world. Such design shows the hand of a wise Designer.

Like plants, animals were divided into “kinds” that can generate incredible variety. For example, the ancestors of the camel kind produced offspring as diverse as llamas, alpacas, and one-humped and two-humped camels.

No living thing was alone. God placed them all into an astonishing array of fully functional communities, probably more diverse, beautiful, and integrated than anything we see today. Whether T. rex tromping through a cycad forest or trilobites swimming in shallow seas, each exotic environment reminds us how much living things depend on each other—and the Creator.

God capped off this week by making humans in His likeness and giving us dominion over the earth. By the end, a beautiful tapestry of forms, colors, sounds, and tastes filled the earth. Communities lived in harmony, and all was “very good.” The stage was set for God’s most glorious work.