Secular scientists see evidence of global catastrophe on Venus and Mars. So why can’t they admit the evidence on earth?

The book of Genesis tells us that a worldwide Flood engulfed the earth at the time of Noah. Genesis 7:11 lists two sources for the waters of the Flood: the fountains of the great deep burst forth, and the windows of heaven were opened. The windows of heaven being opened obviously refers to rain, but what of the fountains of the great deep bursting forth?

There are different theories about exactly what this means, but all of them suggest that there was immense tectonic upheaval at the time of the Flood. We can see evidence of this upheaval all over the planet, if we’re looking for it.

However, most evolutionary scientists are committed to naturalism (the belief that we must find a “natural” explanation for everything, without reference to supernatural intervention). So they dismiss the biblical Flood and its global destruction out of hand, as legend. Yet they don’t have any problem recognizing evidence of global catastrophes on the surfaces of Mars and Venus, the two closest planets to earth. Why is that?

Of all the other planets in the solar system, Mars and Venus have captivated scientists as the most likely places where life could exist. They are nearly the same size as earth and about the same distance from the sun.

This fascination prompted the launch of many unmanned spacecraft over the past few decades to find evidence of life on these two planets. To the disappointment of naturalistic scientists, these missions have shown that conditions on both planets are extremely hostile to life. But the missions had one benefit: they have given us a much better picture of the geologic processes at work on these planets. Studying how rocks move and form on other planets should help us better understand how our planet works.

By the 1970s, spacecraft reconnaissance had revealed that water once was so abundant on the red planet that it left behind river channels. Later missions helped planetary scientists determine that the evidence for water on the Martian surface in the past was even greater than they had realized.

Photographs taken from rovers showed ancient shorelines high on Martian hills, revealing that much of the surface of Mars once was covered by seas. Planetary scientists concluded that there had been a global or near-global flood on Mars—on a planet where there is no liquid water today. 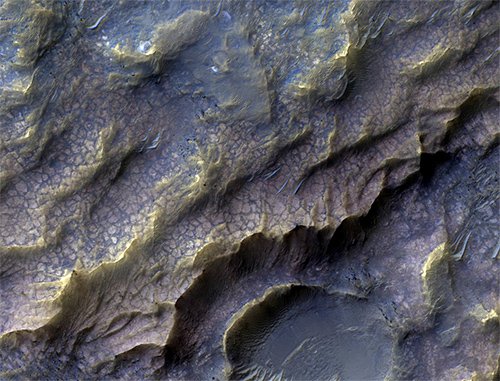 This Martian landscape appears to be the result of water flowing over rock, as observed by NASA’s Mars Reconnaissance Orbiter.

Liquid water can’t exist on Mars today because the atmosphere is so thin and the temperature is far below freezing. If an astronaut on Mars were to pour a container of water onto the ground, a portion of the water would boil right away, while the rest would freeze.

A little water remains on Mars today. Some of it is in the form of gas in the thin atmosphere. Evidence indicates that some is also frozen in the soil and rocks, but it’s not clear how much water exists in this permafrost. What happened to all that water?

At one point in its history, Mars obviously was a warmer and wetter place than today. Planetary scientists believe that very early in its history, Mars had a much thicker atmosphere, which could support warmer temperatures. They even call this time the Noachian period. They also hold out hope that bacteria-like organisms may have evolved back then, and they still hope to find their remains.

They believe that immense amounts of water once flowed, even though only traces remain. Why are they so ready to believe in a past deluge on Mars, but not on earth?

Venus has a dense atmosphere with perpetually thick clouds, so we can’t see its surface. To solve this problem, NASA designed the Magellan spacecraft with a special radar system that could penetrate the clouds and map features on the surface.

Launched in 1989, Magellan spent several years in the early 1990s probing the Venusian surface. What did it reveal? For one thing, it showed that Venus has only a few craters. This surprised most scientists. They expected many impact craters to accumulate if the planet was old and unchanged for billions of years. So what process removed most of them? The most likely candidate was volcanic activity, which would cover older craters.

Using this reasoning, planetary scientists concluded that the entire surface of Venus was overturned (“resurfaced”) by volcanic activity in a relatively short length of time. They came to this conclusion mainly based on what they did not find, along with their starting assumptions about the age of the planet.

The craters all appear fresh, indicating that they are relatively young, too. Other surface features are consistent with the view that Venus underwent global tectonic upheaval in the recent past.

Scientists were quick to reach these conclusions because they would support their starting assumptions, even when other explanations were possible.

But a Docile Earth

Secular scientists don’t accept a global Flood on earth, however, even though it has abundant water on its surface. And they don’t accept that the entire planet was “destroyed” and resurfaced very recently by volcanic and tectonic activity, despite massive evidence.

Why are they so reluctant to accept this scale of catastrophe on earth, but quick to accept it on Mars and Venus?

The answer lies in the power of assumptions to influence our thinking.

Our exploration of other planets has given us some fascinating reminders that major catastrophes have happened in the past, when we weren’t there to observe them. On other planets, scientists’ imaginations are free to run wild to fill in the blanks with the possible sequence of events that could produce the geologic features we find today. But on earth, their naturalistic assumptions about the evolution of life rule out the most obvious and logical possibilities. Since they believe that life evolved slowly on earth over millions of years, a worldwide catastrophe that wiped out all land creatures (except the handful left on a ship) is not an option.

But if it is an option (and God’s Word says it’s not only an option, but it’s really what happened), then a recent, worldwide Flood really is the best explanation for the geologic features we find on our planet today. And it’s perfectly consistent with the catastrophic forces in the recent past that left scars on our neighbors.

Today, Mars has no standing water and no evidence of active volcanoes.

An ocean once covered a large part of the planet.

Today, Venus has no evidence of active volcanoes or moving tectonic plates.

Yet scientists were surprised when probes discovered a relatively smooth surface, with few large, worn-down craters. Over billions of years, Venus should have lots of craters like other rocky planets.

Today, earth has thousands of active volcanoes and clear evidence of moving tectonic plates. Vast oceans cover 71% of its surface.

The entire earth also exhibits much evidence of even greater catastrophe in the past, including piles of ocean sediments on top of mountains, miles thick. We also find thick ocean-laid deposits that stretch across multiple continents.

Dr. Danny R. Faulkner joined the staff of Answers in Genesis after more than 26 years as professor of physics and astronomy at the University of South Carolina Lancaster. He has written numerous articles in astronomical journals, and he is the author of Universe by Design.

Next Article Bacteria Back from the Grave