Enjoy Some Extra Daylight on the Summer Solstice

Happy summer solstice. The summer solstice, or alternately the June solstice, occurred at 6:07 a.m. EDT today. For six months, the sun has slowly trekked northward, reaching its farthest point north of the equator today. Noontime shadows are shortest on the summer solstice. This is the longest day of the year, and nights are shortest now. This isn’t due to some change in the earth’s rotation. Rather, the position of the sun in the sky makes the amount of daylight and night change throughout the year. Over the next six months, the sun will slowly retreat southward to the winter solstice on December 21. During these six months, the days will progressively get shorter, and the nights will get longer. Last autumn I visited Stonehenge in southern England. Some stones there famously align with the rising sun this day. It would have been fun to have been there this morning. But since so many other people probably had the same idea, the place undoubtedly was mobbed, so I guess it’s just as well I wasn’t there.

What Does This Mean?

However, we generally do not experience maximum and minimum temperatures on the solstices. Instead, the extremes in temperature on average happen about a month after the solstices. This is because of thermal inertia—it takes some time to heat the earth in summer and some time to cool the earth in winter. Therefore, there is about a one-month delay in the peak of each season. Consequently, one could argue that summer began a month and a half ago. Some cultures of the past recognized this and chose to officially mark the transition of the seasons on the cross-quarter days. Cross-quarter days are the days halfway between each successive solstice and equinox. The cross-quarter days are in early February, early May, early August, and early November.

As you might imagine, in ancient pagan societies, the changing of the seasons could be a scary thing. What if the sun on its southward journey toward the December solstice kept moving southward? It would usher in perpetual darkness and cold. With no return of sunlight and warmth in spring and summer, crops would be impossible, and everyone would die. Therefore, the occurrence of the solstices and equinoxes renewed hope that life would continue. This called for celebration. However, for Bible-believing cultures, the Creator is in charge. Since God has ordained the changes of the seasons (Genesis 8:22), people need not worry about the changing of the seasons.

Absent this biblical worldview, many ancient pagan cultures attached great significance to these dates. I’ve already mentioned the alignment at Stonehenge on today’s date. In another example, Ireland’s Newgrange has an alignment with sunrise near the December solstice. To the Celts, celebration of the cross-quarter days was important. Through their influence, three of those cross-quarter days remain with us. Groundhog Day in North America on February 2 is a vestige of this practice, as is May Day in Europe and All Saints Day November 1, preceded by All Hallowed Eve the night before. The cross-quarter day in early August is the only one that has fallen by the wayside. I guess that no one feels like saying good-bye to summer so soon.

The True Cause of the Seasons

Many people have a false understanding of what causes the seasons. Many people reason that since we are tilted toward the sun during summer, it must be warmer then due to our being closer to the sun. However, the earth’s diameter is only 8,000 miles, so the maximum difference in distance due to tilting toward and away from the sun is 8,000 miles. But since the sun is 93 million miles away, that is a difference in distance of less than 0.01%. Obviously, that can’t explain the difference in the seasons.

Then what causes the seasons? There are two effects. I call the first one the area effect. When we are tilted toward the sun, the sun appears much higher in the sky, so the sun’s rays make a much steeper angle to the ground. That concentrates the energy in the sun’s rays, making the earth warmer. But during winter, the sun is much lower in the sky, so the sun’s rays are spread out, resulting in less heat. Furthermore, in summer months, the sun is in the sky much longer than in winter months. Hence during summer the sun has more time to heat the earth than in the winter. 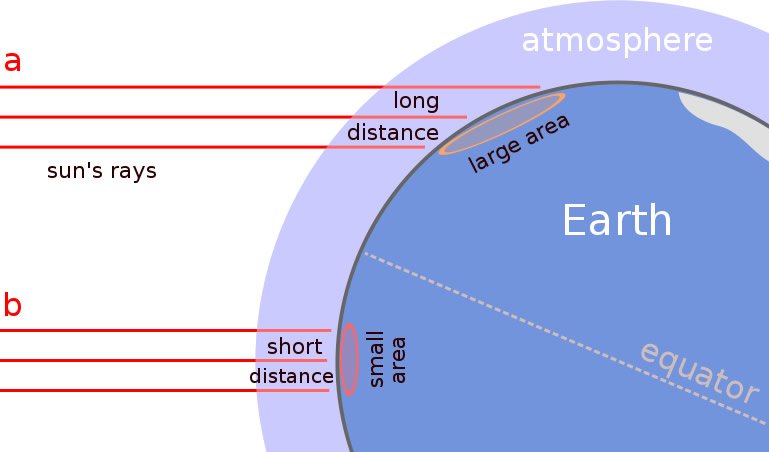 It isn’t distance from the sun that is driving the seasons—it’s the angle of the sun’s rays and the amount of time that the sun spends in the sky each day.

The earth’s orbit is an ellipse rather than a circle. Perihelion, earth’s closest approach to the sun, occurs in early January, about two weeks after the December solstice. Aphelion, the farthest point from the sun on our orbit, is in early July, about two weeks past the June solstice. Therefore, people in the Northern Hemisphere are closest to the sun at the height of their winter, while they are farthest from the sun during summer. How can this be? Again, it isn’t distance from the sun that is driving the seasons—it’s the angle of the sun’s rays and the amount of time that the sun spends in the sky each day.

This brings up an interesting design feature. People in the Southern Hemisphere are closest to the sun during their summers and farthest from the sun during their winters. That ought to make for greater extremes between summer and winter. However, the difference in temperature between the Northern Hemisphere and Southern Hemisphere seasons are not noticeable. This is because most of the surface of the Southern Hemisphere is water, while most of the Northern Hemisphere’s surface is land. Water has a high specific heat, which means it takes much application of heat to warm it, and it takes much removal of heat to cool it. Land heats up and cools down much more quickly. Therefore, by perihelion occurring during summer in the hemisphere with most of the earth’s land and aphelion occurring in winter in the same hemisphere, the temperature differences are moderated. This suggests design.

Enjoy this longest day of the year. With the extra daylight, perhaps after dinner you could mow the grass or take a walk. Or if it’s too hot, sit in the shade and enjoy the bounty of the day. Reflect on God’s kind providence in designing the earth and its seasons the way that they are. Me? Since it stays light so late where I live, I’ll probably grumble that it’s difficult to get to sleep tonight. But that’s more of an issue with improperly drawn time zones and daylight stupid time—inventions of man.