Formed To Be Inhabited

Water, the most abundant compound on earth, perhaps in the solar system, has so many properties that make it truly remarkable especially in regard to making the planet habitable and life possible. Each of the following properties discussed here clearly shows that water is purposefully designed for making the earth habitable.

The Lord, who created the heavens (He is the God who formed the earth and made it, He established it and did not create it a waste place, but formed it to be inhabited). (Isaiah 45:18, NASB)

This is the first of four brief articles that will convey to the reader that the earth truly was formed to be inhabited. In this article we look at the most common liquid on earth and something we all tend to take for granted: water. It is estimated that >70% of the earth’s surface is water and that the human body is approximately 60% water, thus it is incumbent upon us to take a closer look at this “miracle” substance.

Water is commonly referred to as the matrix of life. Its versatility and peculiar properties make it uniquely suitable for life; it is unrivaled by any other liquid. For this purpose, almost all biochemical reactions take place in water. It is necessary, then, to take a look at the structure of water and how this structure gives rise to the properties of water that make it uniquely suitable for life.

A water molecule consists of one oxygen atom and two hydrogen atoms with the molecular formula H2O. It is a bent molecule, not linear as some may suppose. This bent structure is due to repulsion between two “lone pairs” (electrons not involved in a bond) of electrons and those bonding electrons shared by the oxygen and hydrogens. This structure and the higher electronegativity of oxygen compared to hydrogen creates a dipole (i.e., water is a polar molecule. One part of the molecule, the oxygen, is partially negative, and the hydrogen portion is partially positive). It is this polarity that gives water some of its unique properties that are essential to life. (Figure 1) 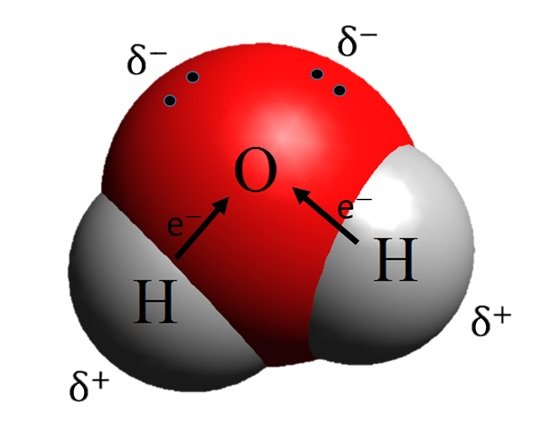 Figure 1 shows the structure of a water molecule and the partial charges which give rise to the polar nature of the molecule. The partial charges are due to the unequal sharing of electrons between the oxygen and the hydrogens. Source: Drago Karlo, https://commons.wikimedia.org/wiki/File:Dipolna_molekula_vode.png, via Wikimedia Commons 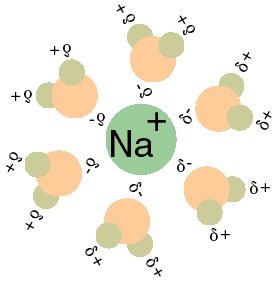 Figure 2 shows the orientation of water molecules around charged solutes. Note the orientations of the water around an ion. Source: Taxman, https://commons.wikimedia.org/wiki/File:Na%2BH2O.gif [Public domain], via Wikimedia Commons

The polarity of water is thus responsible for the dissolution of a myriad of compounds. It is no wonder, then, that blood, interstitial fluid, urine, and intracellular fluids are all mostly water. In order for nutrients to be delivered to the cells, they must be soluble in blood. Likewise, for the body to rid itself of waste products, these products must be soluble in urine. The polar nature of the water molecule is what permits both delivery of nutrients and the ridding of waste. Indeed, as Henderson in The Fitness of the Environment (115) states, “no other chemically inert solvent can compare with water in the number of things which it can dissolve, nor in the amounts of them which it can hold in solution.”

The polarity of water permits the dissolution of many salts and other polar compounds. Some salts dissociate partially while others may do so nearly completely. In either case, this permits the formation of new chemical species. For example, dissolving NaCl, KI, LiBr in water:

The dissociation of salts in water permits the formation of charged solutes (Na+, Cl- and K+, specifically), which can flow in neurons giving rise to neural conduction. 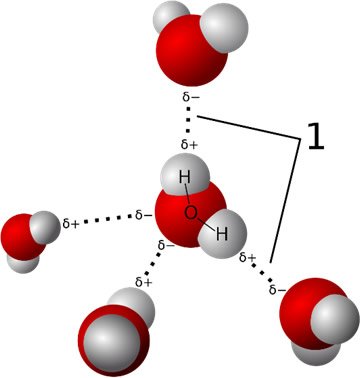 Figure 3. Hydrogen bonding between water molecules. Note the partial (+) hydrogens of one molecule are bonded to the partial (-) oxygen of adjacent molecules. In this same way water can bond with a variety of biomolecules that also possess partial charges. Source: Qwerter https://commons.wikimedia.org/wiki/File:3D_model_hydrogen_bonds_in_water.svg, via Wikimedia Commons

The high electronegativity of the oxygen atom in water means those electrons shared with the two hydrogens will be closer to the oxygen, imparting a partial negative charge on the oxygen and a partial positive charge on the hydrogens. The negative oxygen can then be attracted to the positive hydrogens of another water molecule, or to another molecule with a positive charge, and the positive hydrogens can be attracted to any other negatively charged part of a molecule, such as another water molecule. Every molecule in the interior of a drop of water can potentially be hydrogen bonded to four other adjacent water molecules via hydrogen bonds. (Figure 3) This property of water makes it very cohesive. The polar nature of water permits it to adhere to other polar substances like glass. Interplay between the cohesive forces and adhesive forces of water is responsible for capillary action of water. Capillary action plays a major role in carrying dissolved nutrients and water to plant roots in the soil, as well as carrying them up into the plants. The adhesiveness of water allows it to penetrate small cracks and crevasses in rock, and the cohesiveness draws more water in. When the water later freezes, it expands causing the rocks to fracture. This process repeated year after year leads to the eventual breakdown of the rock, releasing trapped minerals and metals. Water in streams, rivers, and oceans distributes these materials worldwide, making them available for life.

Hydrogen bonds are weak compared to covalent bonds; at room temperature, they are constantly breaking and reforming. However, like Velcro, many such weak bonds can confer great strength. Hydrogen bonds, along with other weak interactions, are the primary stabilizing factor in proteins and nucleic acids like DNA. (Figure 4)

One of the more unique features of water, which is a result of hydrogen bonding, is that upon cooling it becomes more and more dense until about 4°C, when it is most dense. Upon further cooling, from 4°C to 0°C, the density begins to decrease as the water starts to expand. The density change between these two temperatures is small, but of vital importance. The denser, 4°C, water will sink to the bottom of a body of water, such as a lake or pond, while the colder, less dense water, will rise to the surface and form a layer of ice. In this way larger bodies of water may freeze on the surface, but remain liquid beneath. This has obvious benefits for all aquatic life. Interestingly, the low thermal conductivity of ice, helps to insulate the water below it, keeping it from freezing. Likewise, the high heat of fusion of water, also helps to keep the water just below the ice from freezing. (Figure 5) Liquid ammonia has some of the same advantages as water; however, a major disadvantage is that upon freezing solid ammonia is denser than liquid ammonia and sinks.

The sinking of denser, 4°C water and the rising of colder, <4°C, less dense water creates a vertical circulation, or upwelling, whereby oxygen-rich surface water is carried to lower depths and nutrient-rich bottom water is brought closer to the surface, benefiting all aquatic organisms. 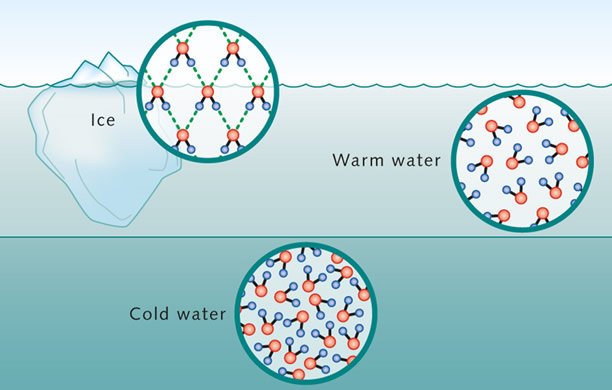 Water, unlike most common liquids, has a high specific heat capacity. This is defined as the amount of heat energy required to raise one gram of water by one degree Celsius (°C). The high specific heat also results from the hydrogen bonding in water. At 0°C, heat energy can be input into ice without a concomitant rise in temperature. This is because the energy goes into breaking the hydrogen bonds between the molecules, as well as increasing the kinetic energy of the water molecules. Once all the ice is melted, any further input of heat energy causes an increase in the water temperature until 100°C, the boiling point of water. At the boiling point, much more heat may be applied without increasing the temperature until all the water becomes vapor, then it will again rise.

The body is mostly composed of water, (~60–65% for the average adult human), thus the high specific heat is instrumental in maintaining proper body temperature, ~37°C in humans. This is particularly true when undergoing strenuous exercise whereby the body core could easily overheat if water did not have as high a specific heat, able to absorb much of the heat produced, and then transport it to the body surface where it can be dissipated through radiation and evaporation. Evaporative cooling is a major means for keeping the body temperature in check. Due to the high latent heat of vaporization, as water evaporates from the skin’s surface, a significant amount of heat is removed, resulting in cooling.

Water has a high heat of fusion which is defined as the amount of heat energy needed to convert 1 gram of ice to water at 0°C, or vice versa. When liquid water begins to freeze, this same amount of heat energy is released. This is sometimes called heat of solidification, or freezing. Citrus growers take advantage of this principle. When a frost is imminent, growers will spray a mist of water over the fruit on the trees. As the water cools and freezes, it releases heat, thus keeping the fruit from freezing. Water also has the highest heat of vaporization, defined as the amount of heat energy needed to convert 1 gram of liquid water to water vapor. This means that water that has absorbed sufficient heat energy to become vapor will, when it cools and condenses, release exactly the same amount of heat absorbed. This latent heat is largely responsible for moderating temperatures of landmasses near large bodies of water. Consequently, the western United States and much of western Europe do not suffer from extremes of temperature in summer or winter. Landmasses not near large bodies of water, such as the Midwest, experience greater temperature extremes in summer and winter. Bodies of water in the tropics also absorb much solar heat, generating water vapor which, when blown toward the poles, cools, condenses, and falls as rain. The heat released in this process helps to moderate global climate. This is very important for life, agriculture, and civilization.

This completes our brief survey of some of the unique properties of water that have all the appearance of having been designed for life. Much more may be said about water, but space does not permit it.

Some may say that all of this is simply coincidental, but as you will see, the “coincidences” begin to accumulate, and they all point in the same direction—the earth was formed to be inhabited.

Next in this series, we will examine the element carbon. We will see that it, too, has many properties that uniquely suit it for life.

I wish to thank Ms. Sabrina Hebron and Mr. Michael Kornoff for their many helpful suggestions.

Previous Article Celebrating Over 60,000 Generations of Creation Science by an Evolutionist Next Article Carbon: God’s Building Blocks for Life