I wrote about some of these changes associated with the December solstice more than a month ago. I mentioned that many people are surprised to learn that the sun usually doesn’t rise due east and set due west. That happens only on the equinoxes. This time of year, the sun rises well south of east and sets well south of west. And therein lies a problem for flat-earthers.

How is this a problem? Modern flat-earthers believe the zetetic model. This figure shows the surface of the earth in the zetetic model. The North Pole is at the center. There is no South Pole, nor is there a continent of Antarctica. Rather, the flat, round earth is ringed by an ice wall that we usually call Antarctica. Flat-earthers don’t know how far the icy waste of Antarctica extends, nor do they care. You see, the bottom of the dome of heaven to which the stars are attached (the firmament of the King James Version of the Bible) rests somewhere beyond the ice wall. Flat-earthers think that no one can penetrate the dome, so it would be pointless to speculate where the ice of Antarctica ends. In the zetetic model, the sun circles above the earth each day around an axis passing through the North Pole. The radial distance between the North Pole and the sun changes throughout the year, with the radius being smallest on the June Solstice and greatest on the December equinox. To flat-earthers, this spiraling distance explains changes throughout the year, such as seasonal temperature differences and the amount of sunlight each day. 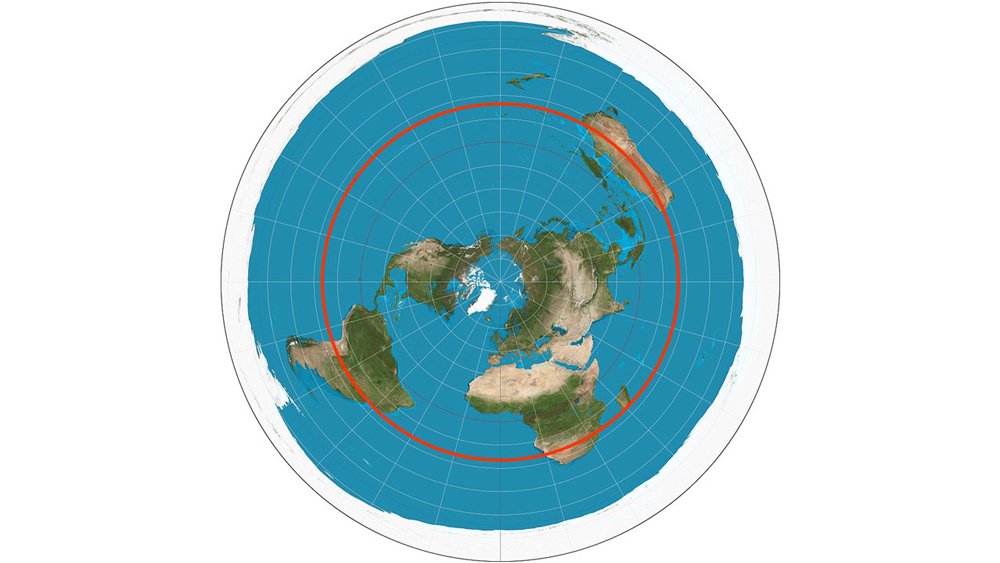 Flat-earthers may object that I am lying and that timeanddate.com is giving false information too.

I’ve been to the Southern Hemisphere four times during austral summer, and I have confirmed these directions of sunrise and sunset. You can check this for yourself by using www.timeanddate.com/sun/. Pick a Southern Hemisphere location and find the sunrise and sunset information for a date between the September and March equinoxes. The times and directions of sunrise and sunset will be displayed. The angle of sunrise is expressed as azimuth, the angle measured along the horizon eastward starting from north. Therefore, azimuth between 90° and 180° is south of east, and azimuth between 180° and 270° is south of west. If you use the predictor at this website, you will find that between the September and March equinoxes, the sun rises south of east and sets south of west at all Southern Hemisphere locations (and in the Northern Hemisphere too). If you test many different dates, you will confirm that around the December solstice the sun rises its greatest south of east and sets its greatest south of west. Flat-earthers may object that I am lying and that timeanddate.com is giving false information too. However, what prompted me to write this blog was that recently I was listening to a 24/7 flat-earth program on the internet in which a flat-earther from Australia noticed sunrise and sunset directions during late spring in the Southern Hemisphere, and he didn’t understand how this could work on a flat earth. The moderator of the program used a website to look up directions of sunrise and sunset for several Southern Hemisphere locations, and he was stumped too. After a while, the moderator began entertaining odd optical effects as possible explanations. This is ad hoc, but making up complicated fixes to their zetetic model doesn’t seem to bother flat-earthers.

Their ad hoc explanations don’t work, and they certainly can’t make any quantitative predictions about sunrise and sunset that can be tested.

On the other hand, the observed direction of sunrise and sunset throughout the year is what we expect on a spherical earth that orbits the sun each year and rotates on its axis with a 23.4° tilt to its revolution axis (the conventional cosmology). Between the March and September equinoxes, The Northern Hemisphere is tilted toward the sun, which allows sunlight to shine around the northern parts of the earth. This is why sunrise is north of east and sunset is north of west worldwide then. Conversely, between the September and March equinoxes, the Southern Hemisphere is tilted toward the sun, allowing sun to shine around the southern parts of the earth, and causing the sun to rise south of east and set south of west. Again, this is true worldwide. I have used the conventional cosmology to compute time and direction of sunrise and sunset at various locations many times. My predictions closely match the observed times and directions of sunrise and sunset. I have yet to see any flat-earther make a single prediction of time and direction of sunrise or sunset. Since in the zetetic model the sun is perpetually above the flat earth, flat-earthers have to make up additional optical flimflam to even qualitatively explain how the sun only appears to rise and set while not actually rising or setting. Their ad hoc explanations don’t work, and they certainly can’t make any quantitative predictions about sunrise and sunset that can be tested.

Previous Article Even Earth Couldn’t Wait to Get Rid of 2020 Next Article The Black Swan: Evidence the Earth Is Flat?