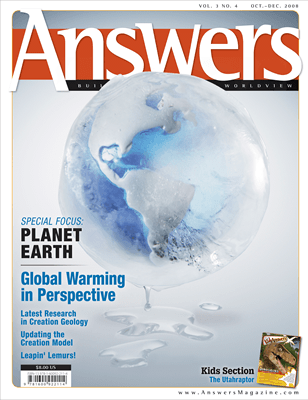 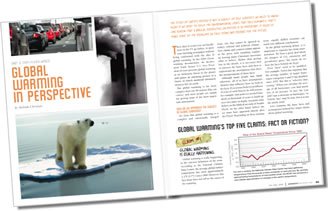 Read this lead article for a biblical perspective global warming in the context of on earth’s history.

Planet earth—the place where over 6 billion people call home. It continues to get much press these days, mostly in the way of things we can do to save her from destruction. Daily we are bombarded with ideas on how to go green, save the polar bears, and reduce our carbon footprint. Yes, global warming remains at the forefront of our minds thanks to much of the media and certain politicians. It can certainly be a confusing topic for anyone, especially Christians who are called to be wise stewards of God’s creation.

A good place to start when trying to discern the facts about global warming is to look at the context of earth history—its past (beginning with creation), its present, and its future. Creation scientists have completed much research on the effects of major earth-shaping events like the global Flood and the catastrophic events that followed.

Our earthly home takes center stage in the October–December issue of Answers magazine. This fact-filled issue provides Christians the needed context in order to properly interpret the claims of global warming. Here is a preview of some of the must-read articles you will find in this relevant issue about our earth in the beginning, during and after the global Flood, and in the future:

Also, you won’t want to miss these additional articles, as well as the latest science and culture news, tips for creation evangelism, and much more: 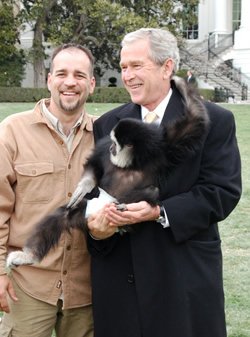 Dan Breeding’s ministry, Creatures of Creation, has taken him to a number of places, including the White House. During the Easter Egg Roll festivities, he brought along his gibbon, Leeza. She is just one of the nearly 40 wild animals he owns and cares for.

Kids will love learning the facts about dinosaurs and fossils. The poster of the fierce-looking Utahraptor will surely find its way on bedroom walls. Parents will enjoy using the teaching points presented on the back to show their children that the Bible is the key to understanding the past, present, and the future. And it helps explain the fossils of dinosaurs we find today.

The pull-out chart shows that creationists really do embrace science. Five successful predictions by creation scientists are presented in a lay-friendly format. This makes for a great discussion starter about recent discoveries about our young earth. Also, don’t forget to visit KidsAnswers.org—a family-friendly, safe site part of the Answers in Genesis and Answers magazine family of websites—for free videos, downloads, and activities!

Make sure to check out the recently redesigned website, AnswersMagazine.com. Subscribers will find the following subscriber-exclusive videos that are filled with solid teaching: