Wormlike Evolutionary Misfit from the Burgess Shale Finds a Home

Crazy-looking fossil’s evolutionary descendants are crawling around in the tropics, evolutionists say.

Did Hallucigenia have a head? Scientists kept searching and finally found it, complete with eyes, in 2015. Once they flipped the animal right side up and found its front end, they drew some astonishingly far-reaching conclusions about its supposed evolutionary ancestry, cousins, and descendants. Read more about it in “Hallucigenia Really Does Have a Head.”

Hallucigenia sparsa may look like a sci-fi alien but it is very much a resident of earth—the earth of the past, that is. This tiny fossil has been a real paleontology puzzle.

While the best-preserved fossils now show this little animal had seven or eight pairs of claw-tipped legs matching two rows of conical spikes on its back, the original fossils only showed one row of legs, and confusion has long clouded attempts to reconstruct, much less classify, this animal. Evolutionary researchers from the University of Cambridge now believe they have definitive proof of not only what this animal was but also what it evolved into and consequently where it fits on the evolutionary tree of life.

Found fossilized in the Burgess Shale by Charles Walcott in 1909 and later in other Cambrian deposits around the world, few fossils have been re-interpreted more than this one. Initially thought by Walcott to be an earthworm-like annelid with legs, the creature was named Canadia sparsa. Just ½ to 3 ½ centimeters long, this Cambrian conundrum is lumped into the phylum lobopodia—a diverse group of legged worms—but no one has been quite sure how to categorize or even describe it. Which end to assign to the head has been as puzzling as figuring out what it was related to, how it moved, and even which side was up.

Though only one row of unpaired legs was visible in the earliest known fossils, walking on a single row of legs didn’t make a lot of sense. Therefore, in the 1970s paleontologist Simon Conway Morris decided it must have walked on its spikes and gave it a new name. Thinking a tube-like structure at the tips of the tentacles was some sort of mouth, Morris envisioned the animal using its leg-like row of “tentacles” to eat. The new name—Hallucigenia—suggested that only someone taking hallucinogens could dream up such an odd animal.

Two decades later the depictions of Hallucigenia were upended again by exquisitely preserved fossils from China. They revealed another row of “tentacles” (formerly, and now once again, thought to be legs), so reconstructions put the spikes back on top and the now properly paired claw-tipped legs on the ground. 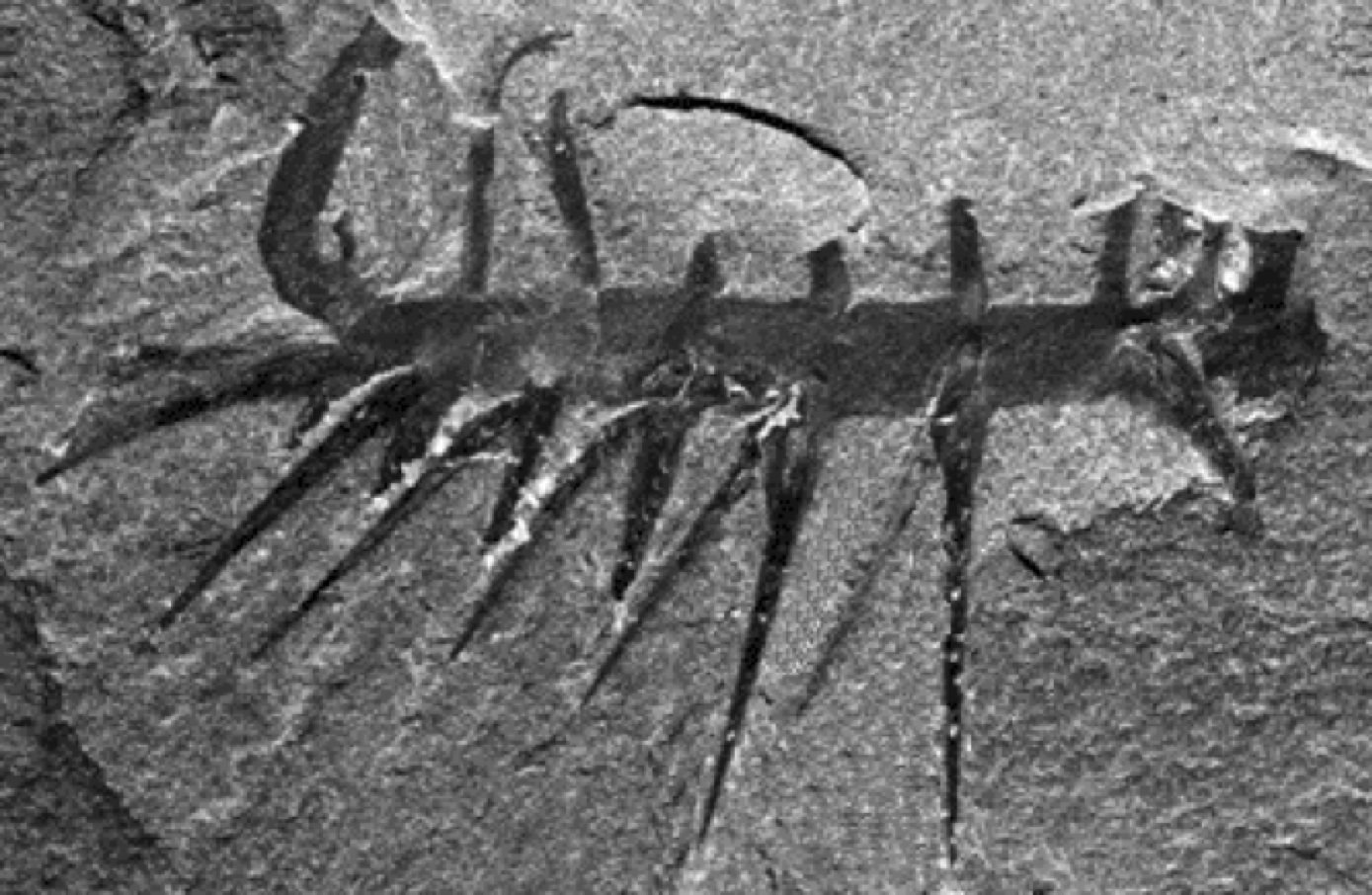 This Hallucigenia sparsa fossil is from the Burgess Shale, currently housed at the Smithsonian and pictured as it was from the 1970s until the 1990s, walking on its spikes with a row of tentacles sticking up. Discovery of a Chinese Hallucigenia specimen with two rows of “tentacles” convinced paleontologists that the “tentacles” were legs and the spikes should point up, leaving the animal to walk on seven or eight pairs of claw-tipped legs. Image from Smithsonian National Museum of Natural History.1

Legs on the Ground but Where on the Tree?

Where to place a Cambrian worm with legs and spikes on the tree of life, however, continued to be a mystery for evolutionists. Might it be an arthropod ancestor or a velvet worm ancestor? they wondered. While the animal looked a little less odd when turned right-side-up, its legs were not jointed like those of arthropods (insects, spiders, and crustaceans). And while velvet worms (onychophorans) have legs, they don’t have spikes on their backs. In fact, velvet worms don’t have much at all in common with Hallucigenia. The lack of additional corresponding homologous body parts has kept the idea of an evolutionary link to velvet worms at arm’s length for many evolutionists.

The velvet worm is a tropical, terrestrial worm-like animal with unjointed pairs of legs and no exoskeleton. It has a pair of antenna with simple eyes and a simple brain. Sticky slime squirts from papillae on the side of its head to entangle prey. Velvet worms resemble arthropods internally but externally look like subtly segmented worms with antennae and fat legs. Modern velvet worms do not differ significantly from the Cambrian velvet worm Aysheaia. 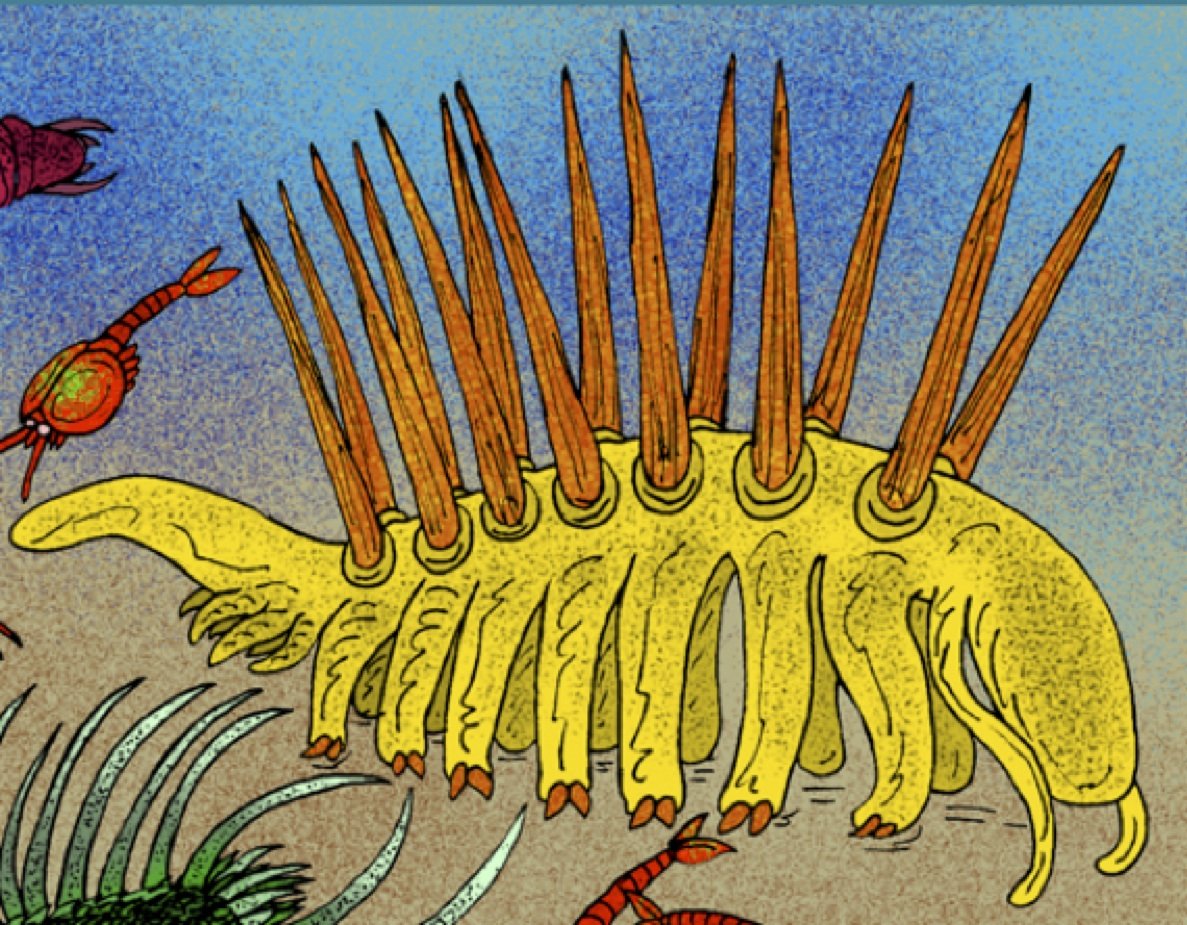 This is a reconstruction of Hallucigenia sparsa drawn to show the latest version of how it moved on claw-tipped legs with corresponding conical spikes sticking up on its back. While how to classify is a conundrum, evolutionists are perhaps more concerned with how it fits on the evolutionary tree of life. Image by Stanton F. Fink, via Wikimedia Commons.

Hallucigenia’s claws and spines were made of nested layers of a cuticle-like substance. There are three layers in the claws and one to five layers in the spines, and the layers are arranged in geometrically precise curves. A pattern of tiny triangular scales also covers Hallucigenia’s spines. Two layers of this same sort of material, also laid down in geometrically precise curves, are found in the hard sharp parts of velvet worms.

“The peculiar claws of Hallucigenia are a smoking gun that solve a long and heated debate in evolutionary biology, and may even help to decipher other problematic Cambrian critters,” says Martin Smith, lead author of the report just published in Nature.

These ultrastructural similarities and precisely nested relationships of the curves, they contend, confirm Hallucigenia’s proper place in evolutionary history. They believe Hallucigenia is ancestral to velvet worms and offers a clue to the anatomy of their common arthropod ancestor.

Clawing at the Past

“An exciting outcome of this study is that it turns our current understanding of the evolutionary tree of arthropods—the group including spiders, insects and crustaceans—upside down,” coauthor Javier Ortega-Hernández explains. “Most gene-based studies suggest that arthropods and velvet worms are closely related to each other; however, our results indicate that arthropods are actually closer to water bears, or tardigrades, a group of hardy microscopic animals best known for being able to survive the vacuum of space and sub-zero temperatures—leaving velvet worms as distant cousins.” 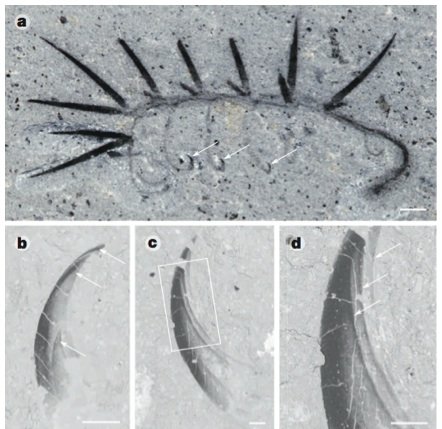 This is Hallucigenia. Its two rows of spikes are dark and clearly visible. Arrows in (a) point to the tiny curved claws on its legs. (b), (c), and (d) are magnifications showing the curved layers of material of which the claws are made. Scale bars: (a) 1,000 mm; (b)–(d) 100 mm. Image by M. Smith and J. Ortega-Hernández, via Nature.4 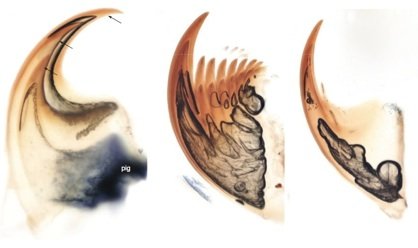 These images show the layers comprising the claw (left), inner jaw (middle), and outer jaw (right) of a velvet worm. Image by M. Smith and J. Ortega-Hernández, via Nature.5. 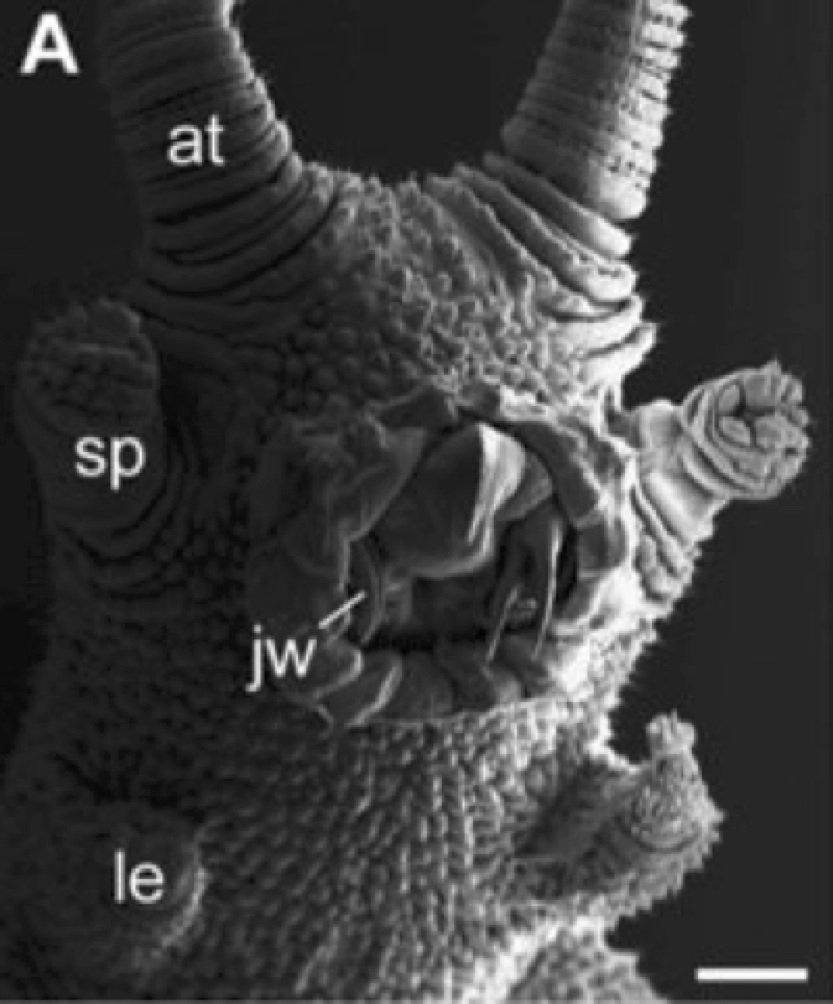 This magnified view of the underside of a velvet worm’s head shows the antennae (at), slime-squirting papillae (sp), its front-most pair of legs (le), and claw-like jaws (jw) inside its round mouth. The velvet worm, like Hallucigenia, is a “worm” with legs, but their similarity pretty much ends there. Now that Cambridge researchers have discovered that its claws and jaws are composed of curved stacks of cuticle-like material, similar to that in the claws of Hallucigenia, evolutionary researchers have decided that despite their many differences the velvet worm is the evolutionary grandchild of Hallucigenia. Scale bar = 500 μm. Image by G. Mayer et al., via BMC Evolutionary Biology.6

The evolutionary history of arthropods and arthropod-like animals was recently the topic of another study tying the velvet worm’s simple brain, which is draped over its mouth and protrudes into its antennae, to the similarly front-mounted neurological anatomy of another mysterious Cambrian creature, the anomalocaridid. The authors of that study spun an evolutionary tale claiming that over evolutionary time the brain migrated backward and the front legs evolved into jaws. The current study paints a similar scenario linking velvet worms, and more distantly arthropods, to Hallucigenia.

Evolutionary researchers are hard-pressed to explain the sudden appearance of innumerable complex creatures in Cambrian rock without evolutionary antecedents a half a billion years ago.

“It’s often thought that modern animal groups arose fully formed during the Cambrian Explosion,” Smith says. “But evolution is a gradual process: today's complex anatomies emerged step by step, one feature at a time. By deciphering ‘in-between’ fossils like Hallucigenia, we can determine how different animal groups built up their modern body plans.”

So now, because the layered ultrastructure of Hallucigenia’s claws and spikes resembles the material making up the jaws and claws of velvet worms, evolutionary researchers are—despite the lack of other similarities—connecting dots on their hypothetical Tree of Life, presuming that the velvet worm’s jaw evolved from the legs of Hallucigenia or an animal like it. From these mathematically curved layers they presume to have found a transition in early arthropod evolution.

But common designs are exactly what we would expect from a common Designer.

Claiming confirmation of their conclusions, the researchers write, “To test the homology of the stacked elements in onychophorans and H. sparsa, we analysed the evolutionary relationships of Palaeozoic lobopodians.” In other words, they judged the correctness of their conclusions by how well they could be made to fit what they already believed about the evolutionary relationships of all legged worms. Their circular reasoning confirms nothing.

Yet while the researchers have uncovered an intricately complex design common—with variations—to these two dissimilar legged worms, they have not demonstrated their evolutionary relationship. The varying numbers of layers and curves in the fine structures of each are observable common designs. But common designs are exactly what we would expect from a common Designer.

It would be interesting to see in the future an engineering assessment of the possible advantages the mathematically reproducible curvature of these structures offer. Such precise designs are often the inspiration of man-made devices mimicking designs that work so well in nature. The intricate care God has taken with the microscopic structure of even the tiny claws, jaws, and spikes of these lowly invertebrates is a testimony not to the randomness of purposeless evolution but to the greatness of our Creator.