Burgess Shale’s Cambrian Fossils Should Change Our View of Evolution

Smithsonian’s list of historic icons that shaped America credits the Burgess Shale with putting us in our rightful place.

The Burgess Shale is featured in the Smithsonian’s new book History of America in 101 Objects. Why is it that its author Richard Kurin, Under Secretary for History, Art, and Culture at the Smithsonian Institution, thinks this fossil-filled formation helped make the United States what it is today? The Burgess Shale with its Cambrian fossils made the top 101 icons of American history, says Smithsonian contributor Jerry Adler, by “changing our view of evolution.”

Not a Change for the Better

Kurin, in a promotional video, explains how he thinks the Burgess Shale has shaped American thinking. He says:

Some see in the Burgess Shales and the fossils they left a vast profusion of life almost like an evolutionary experiment with [where] different life forms have a chance to survive or not. Some have seen these species as evolutionary dead ends that didn’t go anywhere. Others see them intimately connected to life-forms we recognize today.

Why are fossils part of American history? Well, first of all, I think what the Burgess Shales [sic] show us is that life in the United States, in what became the United States in North America, goes back an awful long way. And our environment was very different from what we recognize today in terms of our forests, our lakes, our prairies, and so on.

In fact what the Burgess Shales do is they give us a perspective on who we are and where we are in this universe.1 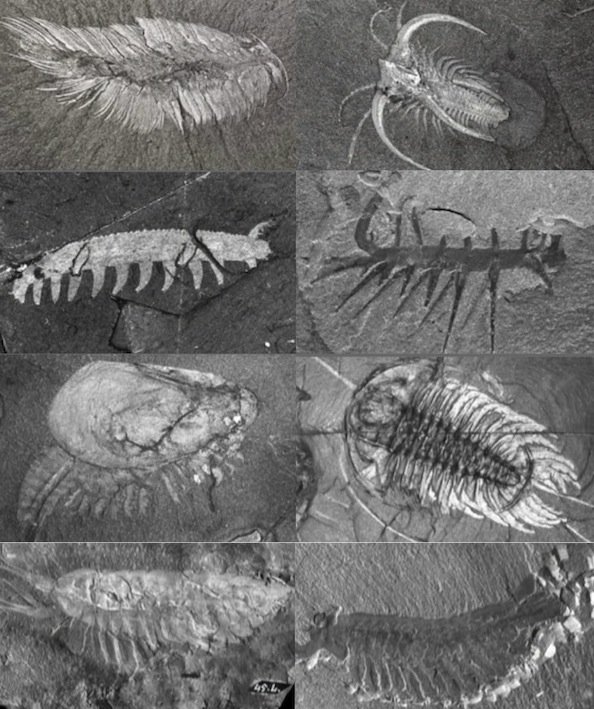 These Cambrian fossils from the Burgess Shale, all part of the Smithsonian’s collection, are featured in its promotional video entitled The Fossils That Changed American History. They are the following:

Evolutionists can offer no explanation for the sudden appearance in the fossil record of diverse life-forms with no discernible ancestral forms.

The Burgess Shale is exposed in outcrops of fossil-rich Cambrian rock on Mount Stephan, high in the Canadian Rockies. Charles Walcott, longtime director of the Smithsonian, found the outcrops in 1909. Walcott collected over 80,000 Cambrian fossils there between 1910 and 1917. Additional excavation was carried out in 1930. While Cambrian fossils, which are mostly marine invertebrates, are found elsewhere in the world, those preserved in the Burgess Shale (and for the most part housed in Washington, D.C.) are particularly nice because many have preserved soft tissue. With exquisitely preserved soft body parts like eyes, muscles, gills, digestive systems, and various appendages, it is possible to get a much richer understanding of the biodiversity of marine invertebrates at the time these fossils were buried than could be gleaned from just shells.

The Cambrian fossils in the Smithsonian’s National Museum of Natural History include about 127 identifiable species. Evolutionists interpret them as the evolutionary ancestors of most forms of life on earth in addition to a number of evolutionary dead ends with no living representatives.

Evolutionists can offer no explanation for the sudden appearance in the fossil record of diverse life-forms with no discernible ancestral forms. Nevertheless, most evolutionists see this “Cambrian explosion” as a wonderful conclusion to whatever invisible processes presumably laid the molecules-to-marine invertebrates groundwork.

The eventual identification of several phyla of animals to which no evolutionary descendants could be assigned provided the theme for Stephen J. Gould’s book, Wonderful Life: The Burgess Shale and the Nature of History. Gould viewed evolution’s experiments like “a lottery in which the lineage leading to human beings just happened to have held the winning ticket,” Adler writes, adding, “If one could somehow turn the clock back to the Cambrian and run the game again, there is no reason to think the outcome would be the same. These little creatures, entombed in rock for a half-billion years, are a reminder that we are so very lucky to be here.”

Experimental biology, rightly reported and interpreted, would have to go further and admit that luck is insufficient. Molecules-to-man evolution isn’t lucky; it has no basis in observable science at all. Nothing observable in biology justifies a molecules-to-man explanation for our existence. Biologists do not observe chemicals turning into living cells. Neither do they observe living organisms evolving into more complex new kinds of organisms. The existence of the Cambrian fossils does not argue for our evolutionary origins but quite the contrary.

Bricklaying on No Foundation

The way the Burgess Shale has been widely interpreted to the public—encouraging evolutionary thinking and glossing over the problems with the evolutionary scenario—has influenced our history. Sadly, it has done so by wrongly leading many to think that trusting our Creator’s account of our origins recorded in the Bible is incompatible with science and good sense. And the resulting pro-evolutionary view foisted on people, with the authority of the Smithsonian to back it up, has given many Americans a false “perspective on who we are and where we are in this universe.”

This is a classic case of proving what you already believed at the outset. Of course, the Burgess Shale fossils reveal something about the “progress” of evolution if you start by believing that evolution has occurred, before you even look at this evidence. But that does not justify the belief in evolution, because it is circular reasoning. And in this instance the outcome is not very uplifting—we are only a freak accident of “nature,” because the die could have been rolled differently and some other creature could have survived that would not have evolved us!

Yet while Stephen Jay Gould and others have claimed these Burgess Shale fossils are examples of “evolution in action,” they remain an enigma, a mystery in fact, to this day. Because the problem for evolutionists—and further study of these fossils has only intensified the problem—is how could all of these fossils, so many unique species, many in unique phyla with unique body plans, have so suddenly in a veritable geologic instant have evolved. This has been called the “Cambrian explosion,” which is a real problem for evolutionists, especially because of the complexity these fossils exhibit, when there are no known evolutionary precursors or suitable ancestors found in the rock layers beneath the Burgess Shale and its equivalents elsewhere around the globe. To this day this problem has not been solved.

Given that evolutionists exult in the random wonder of our existence brought to mind by the Cambrian fossils while having no biological basis to explain this evolutionary so-called “big bang,” we should seek a better explanation. And that explanation really should change our view of evolution! Dr. Snelling explains:

These fossils should have changed our view of evolution, but not in the way the writer or Stephen Jay Gould envisaged. These fossils should cause us to reject evolution altogether. They “cry out” an alternative explanation, one that should be obvious to most geologists. After all, they have come to realize that the only way these fossils could have been fossilized and preserved in such exquisite detail, including eyes, tissue and soft parts, is for the creatures to have been buried rapidly. Indeed, the present explanation is that the creatures got suddenly covered by a debris flow.

Kurin claims in his promotional video that the Burgess Shale fossils “were organisms from about 500 million years ago that were captured in silt in an ancient sea, and they came to be fossilized.”2 Indeed they were “captured in silt,” but not the way that evolutionist would suggest. The very fact that the Burgess Shale so wonderfully preserves the details of these animals’ soft body parts is explained in the pages of the Bible by the historical report of the global Flood in Genesis 7 and 8. Dr. Snelling explains:

Therefore, the better explanation for these fossils is that they were among the first creatures to be buried catastrophically when the global biblical Flood commenced with the breaking up of the fountains of the great deep. That upheaval caused the collapse of the continental margins, which resulted in sediments on the pre-Flood shallow coastal sea-floor avalanching in debris flows down onto the adjoining deeper ocean floor, catastrophically burying this unique group of creatures. They may have lived on the pre-Flood shallow coastal sea-floor and been carried with the avalanching debris flows, or have lived on the deeper ocean floor and been covered where they lived by the cascading sediments.

So the better explanation is that these complex creatures now beautifully preserved in the Burgess Shale were originally a unique biological community in the pre-Flood world, creatures specially created by God during the Creation week about 6,000 years ago. They were then catastrophically buried at the outset of the Flood about 4,350 years ago, and most of them thus went extinct, unable to survive through the Flood into the present world. There was no evolution, just creation then catastrophe.

Building the House Upon Rock

The Burgess Shale should also change our view of ourselves. The global Flood was a judgment upon the wickedness of mankind. Knowing that many of the organisms preserved in the Burgess Shale are lost to the modern world through the catastrophe brought on by willful human wickedness, we should be reminded that we are accountable to a holy God.

Adler and Kurin encourage an odd sort of humility and sense of purpose by telling us our existence is the result of an infinite series of random events that luckily fell out the “right” way. God our Creator does not consider our lives purposeless accidents, lucky or otherwise. He knows and loves every person ever conceived (Psalm 139:1–18; John 3:16). Our true humility should be built on the convicting knowledge that every one of us fails to live up to the standards set by our Creator and due to our sinful rebellious natures are spiritually dead. But the positive result of that conviction should lead us to depend on God, repenting and trusting in the truth that Jesus Christ freely, with unconditional love and grace, became the sacrifice needed to restore us to spiritual life, to save us, and to provide us with an purposeful life now and for all eternity.