Most birds are blind to sweets. They lack the taste receptor to detect sweet-tasting molecules. Yet hummingbirds—dependent on nectar to fuel their fast wings—are experts at telling what is sweet and even at fending off fakes1—non-nutritive artificial sweeteners. The unusual genetic basis for their ability, according to Harvard Medical School biologist Stephen Liberles and his coauthors publishing in Science, has pinpointed hummingbirds’ place in evolutionary history and suggests theropod dinosaurs had no taste for sweets.

How do we taste? Each of the five basic tastes is detected in its own way. (If you thought there were only four—bitter, sweet, sour, and salty—then you apparently missed the memo about #5, umami. Umami is the pleasant, savory flavor of the amino acid glutamate, a 1908 discovery that was slow to catch on outside of Japan.) While sour and salty flavors are detected using ion channels, the other three—bitter, sweet, and umami—are detected by vertebrates using a combination of taste receptor proteins that work in pairs. These protein partners snap together like pieces of a puzzle along with a key part of the molecule they detect.

Humans and most other vertebrates detect sweet and umami using receptor pairs in the T1 series— the T1Rs. (Bitter tastes belong to the T2Rs.) There are three T1Rs, sensibly designated T1R1, T1R2, and T1R3. The T1R1-T1R3 pair detects umami. The T1R2-T1R3 pair senses sugars and other sweets, such as sorbitol and various artificial sweeteners like sucralose, cyclamate, and aspartame.

Each of the taste receptor proteins is encoded by a gene—Tas1r2 for T1R2, for instance. The genes that make each taste possible are found in many different animals, and they tend to follow pretty much the same pair-taste patterns. Taste receptors are also found in a number of locations where their functions have nothing to do with examining what‘s in the mouth, illustrating the fact that much remains to be learned about taste receptors! For instance, taste receptors are found in the brain and in parts of the digestive system that have nothing to do with actually tasting food. Human lungs contain taste receptors that respond to bitter tastes by relaxing the airways.2 Umami receptors are even associated with mouse testicles where their absence results in infertility.3 The molecular basis for taste detection itself is also quite complex and still has many secrets to be discovered.

Who Has No Taste?

Some mammals—sea lions, dolphins, and whales—have no functional T1Rs at all, but as they swallow food whole they probably don’t miss them.4 Giant pandas—which live on bamboo—lack a functional Tas1R1 gene.4 Sweet tastes specifically are undetectable to certain animals. For instance, the T1R2 is defective in cats of all sorts and some other carnivores. The mutations disabling Tas1r2 vary. Because cats—at least cats today in this sin-cursed world—need to eat meat or meat-based food to get certain necessary nutrients, evolutionists assume that cats evolved away from needing a sweet tooth to attract them to nutritious plant carbohydrates. Of course cats didn’t evolve away from being cats, so this sort of change over time has nothing to do with chemicals-to-cats evolution.

Birds of all sorts, it turns out, are completely missing the T1R2 receptor needed for sweet sense. Even hummingbirds, which get protein from insects but need sweet nectar for quick energy calories, cannot form the T1R2-T1R3 combination used by other sweet-sensing vertebrates. By examining the genes of hummingbirds, chickens, swifts, and a number of other birds, the research team confirmed all the birds were missing Tas1r2, but all had Tas1r1 and Tas1r3 genes. The protein receptor T1R1-T1R3 pair produced by chickens and insect-eating swifts, a kind of bird in the same taxonomic order as the hummingbird family, does not bind to sweet molecules. In hummingbirds, however, the T1R1-T1R3 pair that normally would have bound umami instead binds sugars, sugar alcohols like erythritol, and one of the common sugar substitutes—sucralose. 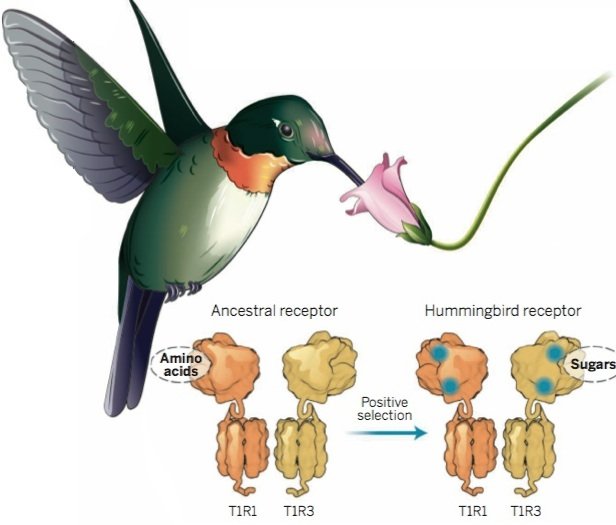 Hummingbirds lack the T1R2 receptor needed to form the sweet-sensing pair of receptors used in other vertebrates that can detect sugar. Instead, their T1R1 and T1R3 receptors differ dramatically from the comparable receptors in humans and other animals. Evolutionists assume the T1R1 and T1R3 receptors in a hummingbird ancestor were repurposed to create a novel kind of sweet detector. Alternatively, the Common Designer of all—the Creator God—may well have supplied the hummingbird with its unique sweet receptor from the beginning in order to supply its high energy needs. Image: P. Jiang and G. Beauchamp, “Sensing nectar’s sweetness,” Science (22 August 2014) 345(6199) pages 878-879. doi: 10.1126/science.1259175.

That’s what happened in test tubes, anyway. What about the hummingbirds? Did they confirm the in vitro findings? Well, partially. The hummingbirds agreed with their taste receptor tests that all sugars (sucrose, glucose, fructose, etc.) were much tastier than water, which they spurned after a few licks.

Defying the test tube results, however, hummingbirds were far less impressed with artificial sweeteners than diet-conscious humans. Even when the artificial sweetener sucralose—which the in vitro receptor detected—was mixed with real sugar, the birds would withdraw their beaks from the feeder, shake their heads, and spit. Hummingbirds do this when fed bitter plant materials, so hummingbirds evidently find sugar substitutes bitter.5 (Something about a little leaven spoiling the whole lump—Galatians 5:9; 1 Corinthians 5:6—comes to mind.)

Unlike cats, crocodiles have T1R2 receptors for sweet tastes. The research team believes therefore that dinosaurs, after diverging from crocodilians, lost their Tas1r2 gene, making it unavailable to their evolutionary descendants, birds. They further speculate that hummingbirds diverged from the rest of the birds 42–72 million years ago and evolved a new sweet sensing function for the Tas1r1 and Tas1r3 genes, switching the combo off for umami and on for sugar. They propose that extensive mutations in each gene not only produced a novel function for the pair but also enabled hummingbirds to successfully evolve into successful avian nectar eaters.

To see just what happened to these genes to produce this novel sweet-sensing function, the team compared hummingbird Tas1r1 and Tas1r3 genes to the chicken’s. There were numerous differences. These differences would have produced a completely different sort of ligand-binding surface on these receptors—a surface for binding sweets.

Believing the hummingbird genes evolved from umami-sensing predecessors, they write, “The evolution of carbohydrate detection by hummingbird T1R1-T1R3 involved widespread mutation of both receptor subunits,”5 and “The dramatic redecoration of the T1R1-T1R3 protein surface that occurred in hummingbirds to allow for sugar binding makes sense, given that carbohydrates and amino acids adopt completely different structures.”5 Emphasizing the complete overhaul of the molecular surface that evolution had to accomplish through numerous mutations, they conclude, “The molecular basis for this change in taste behavior is an altered ligand-binding preference of T1R1-T1R3 from amino acids to carbohydrates, a complex feat that involved dramatic structural changes in the receptor surface”5 (emphases all ours).

This elegant study will significantly advance our knowledge of taste receptors. After all, this is the first sweet receptor discovered that doesn’t use the T1R2-T1R3 pairing. And the fact that hummingbirds were able to discriminate against all artificial sweeteners, even the one that their receptor recognized as sweet, may lead to further studies elucidating just what parts of a molecule comprise the heart of sweetness as well as what additional factors besides receptor proteins might be involved in taste discrimination.

But what this study did not do was demonstrate anything about the evolution of birds from dinosaurs or even the evolutionary diversification of birds from an avian ancestor. In fact, the study did not demonstrate that the umami-detecting gene evolved into a sweet detecting gene. What the team found is that genes somewhat similar to those that pair up to detect umami in non-birds differ dramatically in hummingbirds, producing receptors with “dramatically different” surface binding sites, well-designed for carbohydrates instead of amino acids. Different, in particular dramatically different, does not mean “evolved from something through lots of mutations.” The evolutionary history of the gene pair is not written in the DNA.

God’s design for the hummingbird is showcased in this study. This bird—unlike others—needs a high-energy source of food to power its frenetic lifestyle.

God, who designed all kinds of birds and other animals and man in the space of a couple of days about 6,000 years ago, may well have provided the hummingbird kind with this particular pair of unique sweet detectors. God also, incidentally, equipped the hummingbird with a tongue that quickly folds up to trap liquid nectar, a model of biological engineering efficiency. Nothing in this study shows that birds’ ancestral theropod lost its T1R2 or that divergent hummingbirds evolved a novel sweet function for another gene pair in its place.

God’s design for the hummingbird is showcased in this study. This bird—unlike other birds—needs a high-energy source of food, sugars, to power its frenetic lifestyle. “Look at the birds of the air, for they neither sow nor reap nor gather into barns; yet your heavenly Father feeds them,” said Jesus Christ. “Are you not of more value than they?” (Matthew 6:26). God our Creator, who according to the Bible supplies the birds of the field with the food they need, made sure from the beginning that the hummingbird could find the sugars it needed to survive and thrive.