Hallucigenia Really Does Have a Head

Yes, Hallucigenia had a head, but is it a transitional form holding the clue to the ancestry of all animals that molt?

Hallucigenia really does have a head, Martin Smith and Jean-Bernard Caron finally found using an electron microscope, but it is on the opposite end of the animal from what was previously thought. Hallucigenia’s head has two simple eyes and a mouth. Arrayed around its mouth are spines, and there are teeth in its throat! Circumoral spines probably stabilized its mouth while it ate, and those pharyngeal teeth would have helped move food down into its gut. These newly discovered features are also found in two very different groups of molting animals. And they are not found at all in the velvet worm, the living animal believed to be descended from Hallucigenia.

Evolutionists believe that all molting animals, from roundworms to lobsters, share a common ancestor. Molting animals all have a thin, lightweight cuticle, an exoskeleton they shed in order to grow. Because these animals differ greatly, evolutionists have a hard time coming up with what features their common ancestor might have had. “The early evolutionary history of this huge group is pretty much uncharted,” says Smith. “While we know that the animals in this group are united by the fact that they moult, we haven’t been able to find many physical characteristics that unite them.”1 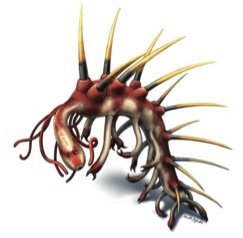 This is the new artist’s reconstruction of Hallucigenia, now right side up and with its head on the correct end. (A blob previously thought to be the head at the other end was, it seems, fluid exuded when the creature was catastrophically buried.) Image reproduced from Martin Smith and Jean-Bernard Caron, “Hallucigenia’s Head and the Pharyngeal Armature of Early Ecdysozoans,” Nature 523(July 2, 2015): 75–78, doi:10.1038/nature14573.

Hallucigenia, some now think, holds the keys to tie these molting animals together and to reveal the characteristics of their common ancestor. “It turns out that the ancestors of moulting animals were much more anatomically advanced than we ever could have imagined: ring-like, plate-bearing worms with an armoured throat and a mouth surrounded by spines,” explains Caron. “We previously thought that neither velvet worms nor their ancestors had teeth. But Hallucigenia tells us that actually, velvet worm ancestors had them, and living forms just lost their teeth over time.”1

Hallucigenia’s circumoral spines most closely resemble those of extinct Cambrian radiodontans while its pharyngeal teeth most closely resemble those of Cambrian priapulids. Radiodontans and priapulids are both groups of molting animals but don’t have much in common. Evolutionists believe Hallucigenia, because it has traits in common with very different groups, is a transitional form linking disparate groups of molting animals to a common evolutionary ancestor.

Commenting on the new discoveries in Nature, evolutionist Xiaoya Ma writes, “Fossils provide direct evidence of evolutionary history, and their unique morphological combinations can reveal crucial evolutionary links . . . These findings amplify the transitional status of Cambrian lobopodians [the group to which Hallucigenia belongs].”2

The fossil record does not provide “direct evidence of evolutionary history.” Instead it provides direct evidence that certain animals with particular combinations of traits existed. Observable biology does not reveal any way that one kind of animal can naturally evolve into a different kind of animal, and the fossil record does not show that one kind of animal was evolving into something else. In fact, when it comes to the Cambrian explosion, the fossil record shows that countless complex animals in many different groups coexisted without evidence of simpler evolutionary ancestral forms. (Further, the extraordinary preservation of soft tissue in so many animals in the Cambrian explosion is consistent with rapid catastrophic burial during the global Flood of Noah’s time.) The fossil record reveals animals sharing a common Designer, not a common ancestor.

Common designs—like molting, a mouth surrounded by spines, and throat teeth—appear in many different sorts of animals. Finding an unexpected combination of traits in one animal does not demonstrate that animal is a transitional form, a missing link to a common ancestor shared with completely different kinds of animals. And the fact that these traits shared by various animals in the Cambrian explosion are even more “anatomically advanced than we [evolutionists, that is] ever could have imagined” is not a surprise in light of the history of life on earth as provided by the Creator of all life in Genesis. Rather, various functional combinations of common designs are exactly what we expect to see in a world of living things designed by a wise common Creator.

Previous Article Is “Grandfather Turtle” the Transitional Form that Puts Creationist Claims to Rest? Next Article Evolution and What the Image of God Is Not