The Cambrian Explosion just got a larger dot on the Canadian map. Admittedly the dot is a little blurry, as the location of this newly discovered buried treasure is being kept secret. (Canadian officials are concerned about vandals and thieves, though considering the fact that most fossils from Canada’s Burgess Shale—the first known and best example of the “Cambrian explosion”—traveled south to the Smithsonian and never returned, one might wonder if their caution concerns more than the ordinary sort of fossil snatcher.)

Zooming in on the Secret Site

The secret location is about 26 miles southeast of the famous Burgess Shale in Yoho National Park. Like the original Burgess Shale, the new dig near Kootenay National Park’s Marble Canyon is located on a mountainous outcrop in British Columbia. Fossil hunters from the Royal Ontario Museum and several universities found the site by following the curve of the mountain from where Charles Walcott made his premier Cambrian discovery more than a century ago.

“We were already aware of the presence of some Burgess Shale fossils in Kootenay National Park. We had a hunch that if we followed the formation along the mountain topography into new areas with the right rock types, maybe, just maybe, we would get lucky—though we never in our wildest dreams thought we'd track down a motherload like this,” explains Pomona College geologist Robert Gaines. “It didn't take us very long at all to realize that we had dug up something special. To me, the Burgess Shale is a grand tale in every way imaginable, and we are incredibly proud to be part of this new chapter and to keep the story alive and thriving in everyone's imagination.”

Smithsonian director Charles Walcott found the fossil-rich exposed outcrop of Cambrian rock on Canada’s Mount Stephan in 1909. He collected over 80,000 Cambrian fossils from this Burgess Shale there between 1910 and 1917. Most remain in the Smithsonian National Museum of Natural History’s Burgess Shale Fossil collection. 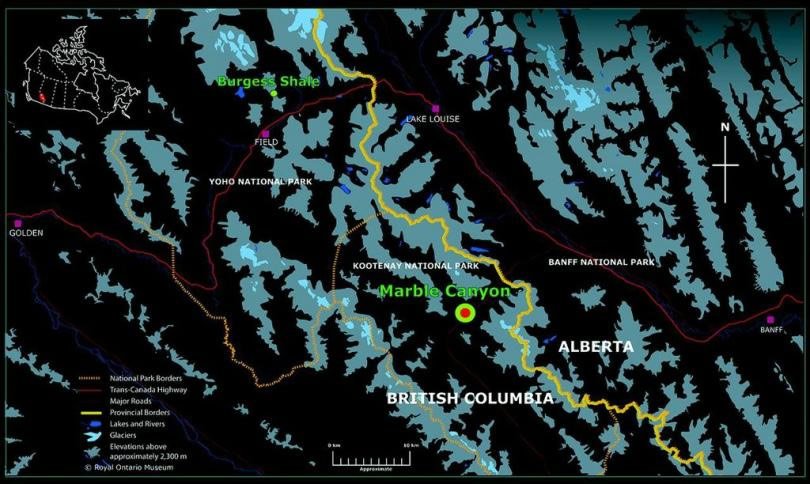 Cambrian fossils, which are mostly marine invertebrates, are found elsewhere in the world too. However, those from Canada’s Burgess Shale are numerous and notably well-preserved. With exquisitely preserved soft body parts like eyes, muscles, gills, digestive systems, and various appendages, it is possible to get a much richer understanding of the biodiversity of marine invertebrates at the time these fossils were buried than could be gleaned from just shells. Cambrian rock also preserves the deepest fossil record of vertebrates.

“This new discovery [near Marble Canyon] is an epic sequel to a research story that began at the turn of the previous century, and there is no doubt in my mind that this new material will significantly increase our understanding of early animal evolution,” says Jean-Bernard Caron of the Royal Ontario Museum (ROM). “The rate at which we are finding animals—many of which are new—is astonishing, and there is a high possibility that we'll eventually find more species here than at the original Yoho National Park site, and potentially more than from anywhere else in the world. We are very excited to go back to the field this summer, during the ROM's Centennial year, with one of our main goals being to increase the number of new species discovered.”

Evolutionists are hard-pressed to explain this “Cambrian explosion”—the abrupt and seemingly simultaneous appearance in the fossil record of such a diverse array of complex animals. They believe that from around 542 million years ago until about 505 million years ago—the date assigned to the Burgess Shale2—many sorts of complex animals evolved. All major animal body plans are represented in the Cambrian explosion.

Caron and colleagues, writing in Nature Communications, report they have found hundreds of fossils, including those of previously unknown species, at a record-breaking pace. “Ten of the species are not found anywhere else,” says Caron. “We’ve only scratched the surface on this mountain, it’s the tip of the iceberg.”3 The Marble Canyon fossils equal or exceed the Burgess Shale for their large number of well-preserved soft-bodied fossils. Anatomical features previously unknown in some ancient animals—such as primitive brains—suggest to the researchers that those animals were more advanced at that time of the Cambrian explosion than previously thought. The researchers express surprise at finding such a diverse assemblage of evolving animals so close together in time and space. 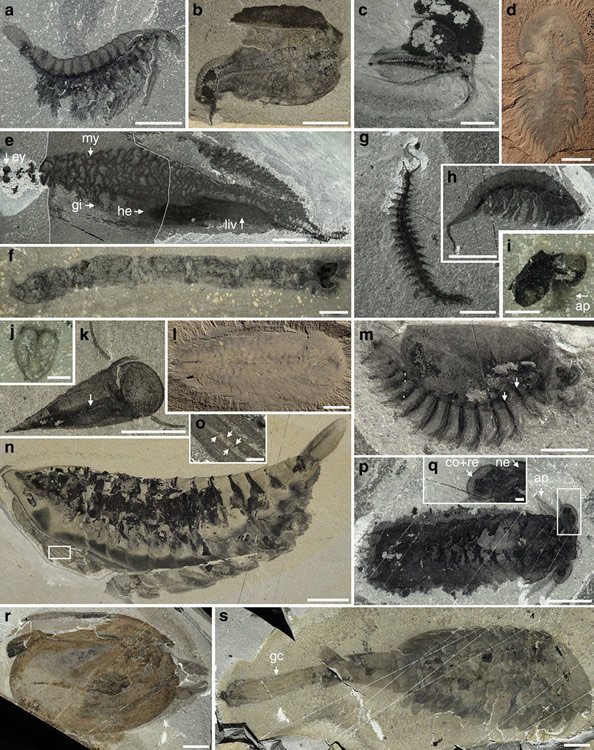 These are some of the fossils found in Canada’s newest Cambrian fossil bed. Like similar fossils in the nearby Burgess Shale these specimens preserve soft body parts. For example, Metaspriggina (e) has a preserved eye, gill, heart, liver, and myomere; Mollisonia symmetrica (p,q) has preserved appendages, cornea, retina, and nerve bundle. Compare to photos of specimens from Burgess Shale in “Burgess Shale’s Cambrian Fossils Should Change Our View of Evolution.” Such preservation is most consistent with a history of rapid burial as occurred during the violent onset of the global Flood. Image by J. Caron et al., via Nature Communications.4

Though most Cambrian fossils are invertebrates, vertebrate evolution seemed to be off to a good start too, the team believes. They have found a fossilized eel-like Pikaia, which evolutionists believe to be the most primitive vertebrate in the fossil record. Because the only other known Pikaia was found in the original Burgess Shale, they believe their find proves this extinct vertebrate really was the common ancestor of all vertebrates. After all, one might have been an evolutionary misfit or dead-end. With only one, “you don’t know if it’s really representative,” explains Caron. But two makes a trend! “This now enriches our view of Cambrian life and you see the roots of animal groups still among us.”5

When he described the Pikaia fossil from the Burgess Shale in 2012, Caron said, “Pikaia is something that people can take close to heart, because we are connected.”6 You can read more about why he thinks that is so—and why he is wrong—in “Common Ancestor Hidden in Burgess Shale.” Pikaia is an extinct vertebrate deep in the fossil record, but whether paleontologists turn up two of them or ten of them, their existence deep in the fossil record, buried with other marine creatures, does not demonstrate that Pikaia ever evolved into any other kind of creatures.

The researchers express surprise at finding such a diverse assemblage of evolving animals so close together in time and space.

There is one other place in the world where a similarly high concentration of Cambrian fossils has been found—the Chengjiang fossil beds in faraway China. The Chengjiang fossil beds carry a date 10 million years older than the Canadian Cambrian fossil beds. Moreover, some animals previously known only from the Chinese site have now been discovered in the new Canadian fossil bed. The research team therefore believes that evolutionists may have previously underestimated how long the Cambrian explosion lasted and how widespread these evolutionary innovations and successes were.

These evolutionary researchers interpret their findings as evidence that evolution was extremely busy producing diverse life forms in close proximity to each other as well as matching forms half a world away in China. However, their interpretations are controlled by their presuppositions. They are confident that the diversity of life and life itself is a product of the natural processes of evolution. Yet biology has never shown animals evolving into new, more complex kinds of animals. Evolutionists simply assume that all life—including the diverse forms of life with “advanced” anatomical traits found deep in the fossil record—must be evolutionary products for lack of any other naturalistic explanation for their existence.

God’s eyewitness account of the origins of life, as found in the Bible, explains that God created all kinds of life and the earth itself during just 6 literal days about 6,000 years ago. He created living things to reproduce after their kinds, He says in His Word, and that is exactly what we observe in biology.

The researchers express surprise at finding such a diverse assemblage of evolving animals so close together in time and space.

Furthermore, the exquisite preservation of so many soft-bodied animals as found in the Burgess Shale and the new Marble Canyon fossil beds is consistent with rapid burial. Otherwise, the soft body parts would have decayed. The events surrounding the global Flood described in Genesis 6–9 explain the so-called Cambrian explosion. Some of the water came from the opening of the “fountains of the great deep” (Genesis 7:11), an apparent reference to violent undersea activity. Therefore, the first habitats and ecosystems to be destroyed, churned, and dumped atop the “Precambrian” rock of the pre-Flood world would have been the seabeds, where upheavals would have suddenly buried countless undersea organisms.

Answers in Genesis geologist Dr. Andrew Snelling explains, “The Cambrian fossilized creatures lived prolifically on the wide shallow sea floor surrounding the pre-Flood supercontinent.” We infer from the fossil record that “they were picked up and buried by the rising violent ocean waters as they swept up onto the broken up continental fragments.”

Diverse populations of shallow marine invertebrates form the dominant population of Cambrian rock, the first sedimentary layer laid down by the global Flood. Rapid burial resulted in the excellent preservation of the soft body parts on many of the creatures so buried. As water rose higher additional burials of organisms sorted and swept together along with water-borne sediment would have created layer after layer of sediment, producing much of the fossil record, not over millions of years, but early in the year of the global biblical Flood.

The billions of animals buried in the Cambrian rocks were merely descended—not evolved—from animals of the same kind created by God just 6,000 years ago. Thus it is no surprise at all to find the same species in similar sites in Canada and China. The new Cambrian discoveries near Marble Canyon do not reveal anything about how evolution supposedly happened but instead are completely consistent with the history presented in the Bible.