Elephant: The Giant with Specialized Tools

Life as an Elephant

An elephant’s trunk is like a built-in multi-purpose tool. If it wants to reach some choice leaves higher than its head, it simply reaches up and snaps off the branch with its trunk. If needed, the elephant can use its trunk to uproot a tree or lift a 500-pound log. The trunk is not only strong but also sensitive, so it can delicately curl the tip around a berry.

The trunk also functions as the elephant’s nose for breathing and smelling. Elephants can suction gallons of water in that long trunk, either piping the water into its mouth or showering itself. Alternately, the elephant may inhale dust to puff over its body, shielding against the sun and insect bites. The elephant can even use its trunk to snorkel, walking underwater with the trunk’s tip in the air.

To accomplish these feats, the trunk is equipped with over 100,000 muscle units, giving strength and dexterity. Weighing in at roughly 300 to 400 pounds, the trunk is no lightweight piece of equipment.

Another piece of equipment the elephant uses is its tusks. The tusks are incisor teeth that curve out from the lower jaw, growing to around six feet for the African male. The tusks can function in digging, moving, and attacking. Interestingly, elephants usually prefer a certain tusk, like humans who are right- or left-handed. To compensate for the sometimes 400-pound tusks plus the 300 to 400 pound trunk, the elephant’s skull is porous, thus making it much lighter than if it were solid.

As the largest land animal, the elephant needs big feet to support itself.

As the largest land animal, the elephant needs big feet to support itself. The bone structure, however, shows that this gigantic animal is walking on tiptoes. Just the toes of its feet touch the ground. To support that bone structure, the elephant’s foot is surrounded by a cushioning fat pad. This soft “shoe” allows the giant to walk with quiet, muffled steps.

When walking through the water, the elephant may sink three feet deep in mud. Does it ever get stuck? Actually, the foot is designed so that it shrinks in diameter when the elephant pulls up, so the leg easily slides out.

Elephants live in tight-knit herds made up of extended family members. The herd is led by an older matriarch. Because elephants have excellent memories, she can lead the herd to places she remembers as good for grazing or drinking. The matriarch is protective. If she senses a threat, she takes the lead in charging with the rest of the herd behind her. Quite a fearsome sight!

The herd especially looks out for the baby elephants, called calves, which are vulnerable to predators. When male calves grow up, they join a herd of males or strike off on their own. Each newborn calf, weighing around 200 pounds, generates excitement and is announced by blaring trumpet calls.

Whether sounding a trumpet call that reaches a mile, emitting a rumbling growl, or producing low-frequency sounds usually inaudible to the human ear, elephants are communicative creatures. Fascinating studies have shown the elephant’s intelligence in such skills as recognizing itself in a mirror, comparing quantities, and distinguishing between human languages. 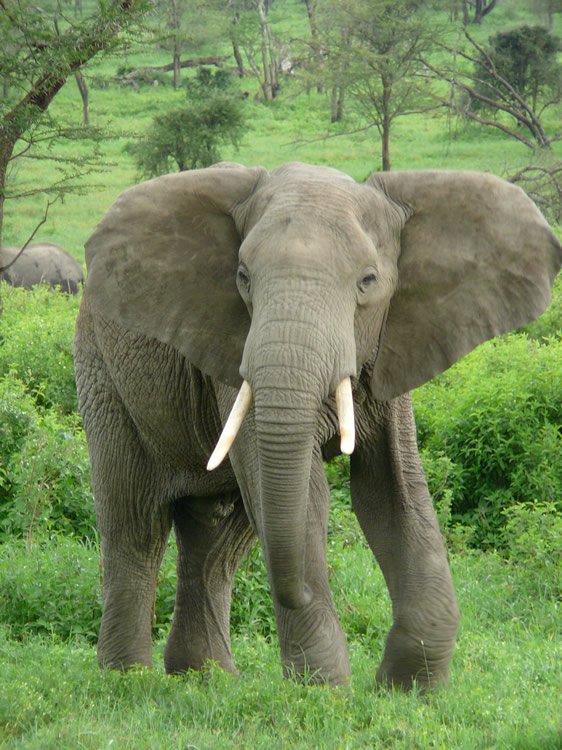 Despite the lack of transitional forms, many evolutionists believe the elephant’s closest living relatives are the furry little hyrax and the aquatic manatee. They have not dug up evidence to use for showing the supposed evolution of the trunk, let alone many other unique features of the elephant.

Creationists have the same evidence as evolutionists. The problem is not the evidence, but rather sinful man’s faulty interpretation of the evidence made in a futile attempt to avoid recognizing the Creator. The incredible features of this impressively large and intelligent creature showcase some of the great skill and care of our Creator who reveals Himself not only in creation but also in his Word, the Bible.