Did Natural Selection Play a Role in Speciation?

How Species Arose after the Ark

by Dr. Nathaniel T. Jeanson on July 30, 2016
Featured in The Origin of Species After the Flood
Share:
Email Using:
Gmail Yahoo! Outlook Other

In our series, we’ve concluded that many new species have formed from the kinds that Noah took on board the Ark. We also observed that, when God created the kinds, He frontloaded them with genetic differences—with the potential to form all sorts of new species and varieties.

This fact alone completely transforms Charles Darwin’s “mystery of mysteries”—the origin of species.1 Darwin had no concept of our understanding of modern genetics, and the conclusions we have reached were entirely inaccessible to him. Specifically, with respect to how species change and the ultimate source of the visible varieties we observe, Darwin had no genetic insights. Conversely, since species are defined by their heritable traits, our modern genetic discoveries represent the first real, comprehensive answer to the central question Darwin pursued.

Our previous post left one significant detail unaddressed. While we carefully elucidated the origin of the vast majority of genetic varieties observable today, we didn’t quite connect the dots to how these varieties in individuals become distinct populations of new species.

In prior posts, we argued that, in individual members of the various kinds, God created the two copies of DNA different from one another. In technical terms, this is referred to as being heterozygous. For new visible traits to arise from this created heterozygosity, all that appears to be required is a shift from heterozygosity to homozygosity. The prefix homo- denotes “same,” and a movement towards homozygosity is a change from a DNA state in which the two copies differ toward a DNA state in which the two copies are more and more similar to each other. 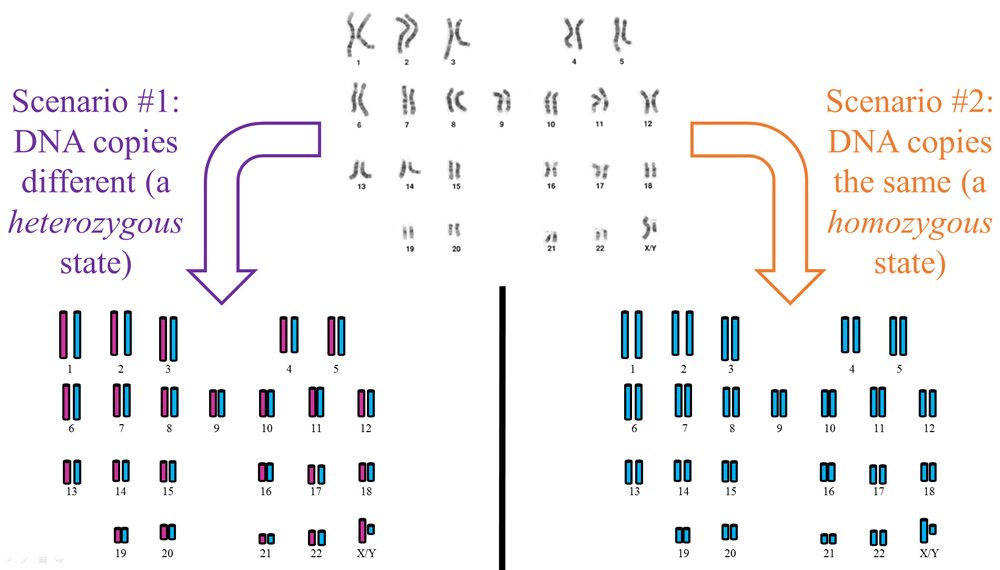 Figure 1. Human DNA is inherited from both parents. Hence, the condensed forms of DNA (visible in the top part of this image as floppy, noodle-like structures called chromosomes) come in pairs—one of each pair is inherited from each parent. Because our parents are different, each member of a chromosome pair is different from the other, as under scenario #1 on the left part of this image. Since Adam and Eve were created directly by God without human parents, it’s possible that both members of each chromosome pair were created identical, as in scenario #2 on the right. Nonetheless, available evidence suggests that each member of a chromosome pair was created different from the other. Under this scenario, it’s very easy to explain the millions of DNA differences that exist among humans today. Image of karyotype by Mats Halldin, via Wikimedia Commons. 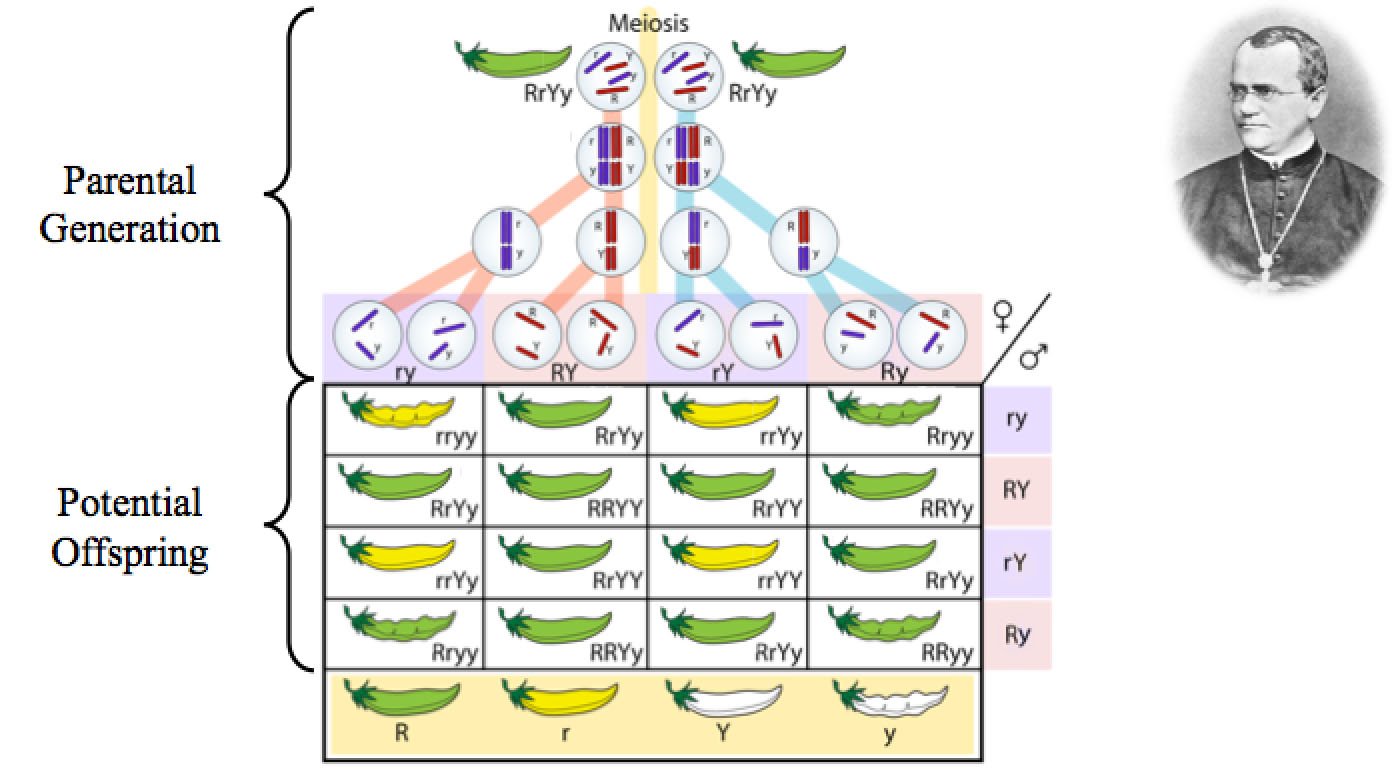 Figure 2. Gregor Mendel, the Austrian monk whose meticulous experiments in pea plants laid the foundation for our modern understanding of genetics, demonstrated that genetic potential can be hidden. Because DNA in the cell compartment (termed the nucleus) is inherited from both parents, it comes in two copies, which is illustrated by the two pairs of bars (representing chromosomes) that come in either a red or purple version. Information for pea pod color (R for green or r for yellow) and pea pod shape (Y for smooth and y for rough) is encoded by these bars, and each individual member of a bar pair need not encode the same information for shape and color—e.g., the top cells have all four versions (R, r, Y, and y). Nevertheless, despite having genetic information for yellow and rough pods, the appearance of the parents is green and smooth. During the process of cell division (termed meiosis), individual members of these chromosome pairs are distributed into sperm and egg cells, which permits a variety of combinations to arise in the offspring (e.g., green and rough-shaped pea pods, green and smooth-shaped pea pods, yellow and rough-shaped pea pods, and yellow and smooth-shaped pea pods). Image of Gregor Mendel by Materialscientist, via Wikimedia Commons; image of pea plant diagram adapted from LadyofHats, via Wikimedia Commons.

For a new species to form, in technical terms, homozygosity must be maintained.

For this process to lead to the formation of a new species, a new population must be formed. If a new population does not form, the yellow offspring might cross with green offspring, and the next generation will have the yellow trait hidden again. Under this scenario, no permanent change will have taken place. For a new species to form, in technical terms, homozygosity must be maintained.

How could a homozygous state be isolated and kept from being mixed with heterozygous individuals? How could yellow pea pod offspring be prevented from crossing with green pea pod individuals?

In Gregor Mendel’s case, he personally oversaw the breeding process. Similarly, in animals, human breeders keep desired offspring from mating with other individuals that lack the desired traits.

But in the wild, no human breeders exist. How could homozygosity be maintained?

Unlike plants, animals can move or migrate. Homozygous animal individuals can easily be isolated from heterozygous individuals by migration. Not surprisingly, many species today are geographically isolated from one another.

For example, as their names imply, the African and Asian elephants exist on different continents. As another example, the 7 wild species of horse-like creatures that exist today—including three different species of zebras—are spread out over Africa and Asia.3 In the cat family, tigers are Asian, lions are primarily African, jaguars and pumas are American. In short, on a globe as big as ours, geographic isolation is easy.

Naturally and by chance, some individuals will die, and others will survive to reproduce.4 As we observed in a previous post, the vast majority of mammal kinds died permanently—they’re extinct. But repeated cycles of massive population death followed by survival of a few individuals to found a new population are not necessary for speciation. Once God created kinds with enormous genetic variety from the start, reproduction and migration were virtually all that were needed to produce a huge number of species.

Speciation from Start to Finish

When God created the kinds heterozygous, He virtually guaranteed the formation of new species.

Let’s put the pieces together one more time to understand how easily species formed post-Flood. When God created the kinds heterozygous, He virtually guaranteed the formation of new species. The statistics of reproduction5 ensure the appearance of new traits in one or a few generations, and simple population growth curves indicate that these offspring can found new populations in short order. As these populations moved away from one another geographically, new species could form.

Is this process still occurring today? Take the African Cape buffalo as an example. Its curved horns have become a symbol of African wildlife. Yet several subspecies of the Cape buffalo exist. These subspecies also happen to be geographically distributed across the African continent. In perhaps a few decades, it wouldn’t be surprising if scientists labeled these subspecies as separate species. 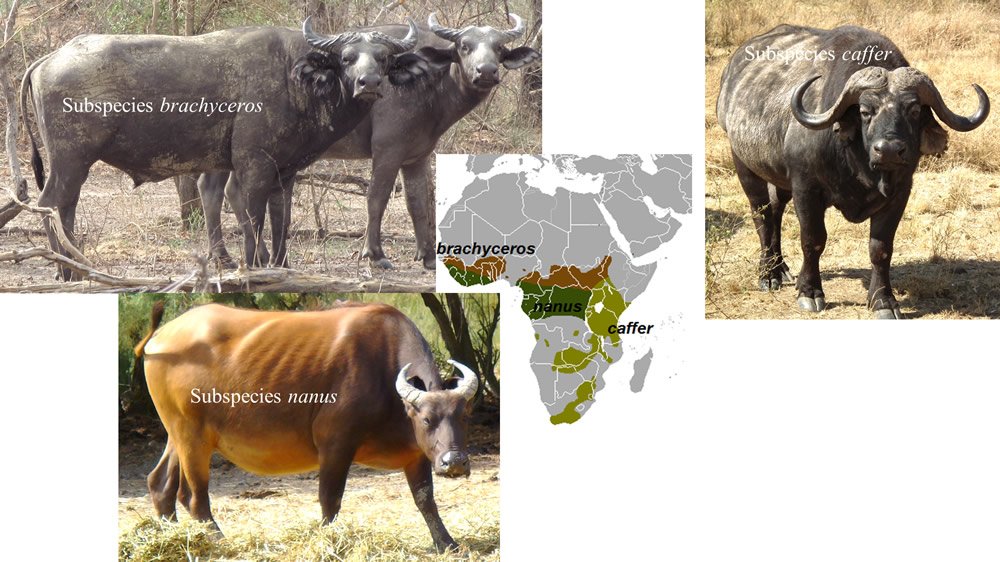 If this occurs, most people in the professional scientific community would probably view this as simply a bookkeeping change. Yet the process of speciation that I outlined above suggests that, in fact, what we’re observing right now is a bona fide formation of a new species.

Subspecies exist in many other species.6 Hence, speciation could be happening right now all over the planet. If we’re willing to consider the biblically consistent, scientifically justified model that I outlined above, I think we’d see a complete replacement for Darwin’s answer.

To underscore this fact, it should be clear from all that we’ve discussed that young-earth creationists are not evolutionists. We’re not a spin-off or an odd extension of Darwin’s principles. Instead, we postulate a very different source for the genetic variety we see today, and we explain speciation on a very different timescale.

Under the parameters we just laid out, evolution as Darwin described is not possible.

Furthermore, this front-loading of genetic information at the creation event also naturally sets limits on the speciation process.7 Since most of the genetic variety we see today goes back to the Creation Week, formation of new kinds (i.e., higher categorizations, such as at the Family level, not species) would require a massive—miraculous—input of new genetic information. Under the parameters we just laid out, evolution as Darwin described is not possible. In contrast, formation of new species from the kinds on board is not only possible, it represents a scientifically superior explanation to any that Darwin or his scientific descendants have proposed to date.

Previous Article Getting Enough Genetic Diversity Next Article Why Don’t More People Accept the Young-Earth View of Speciation?
Ed. note: Figure 2, its caption, and referencing text have been slightly modified from the original version of this article that appeared on 7/30/16.