On July 7, 2016, the Ark Encounter welcomed its first guests. What many do not realize is how much work and research goes on behind the scenes to produce the exhibits. One of the frequent questions we are asked is, “How do we get all the animals today from the animal kinds that were on the Ark?” One of the ways is natural selection. Charles Darwin believed that natural selection was the main mechanism behind molecules-to-man evolution. However, as is clear from observational science, natural selection (along with other mechanisms) only leads to variation within a kind and not the evolution of one kind of animal into a completely different kind of animal. Because I highly regard their integrity, commitment to biblical authority, and scientific practice, I asked Dr. Georgia Purdom (PhD, Molecular Genetics, The Ohio State University) and Dr. Nathaniel Jeanson (PhD, Cell and Developmental Biology, Harvard University) to write an article discussing the reality and role of natural selection. I endorse their conclusions and hope this will help answer, in part, the question of how the many species of animals we have today descended from those kinds that were on the Ark.

On the grassy plains of East Africa, a herd of Grant’s gazelles meander slowly in the afternoon sun. Suddenly, the herd dashes off in unison—with a streak of spotted fur in hot pursuit. The healthy gazelles easily escape the hungry cheetah, but a sickly and weak gazelle at the back of the herd pitifully succumbs to the carnivore’s devices. Has “natural selection” struck again? And why does it matter to the creation/evolution debate? 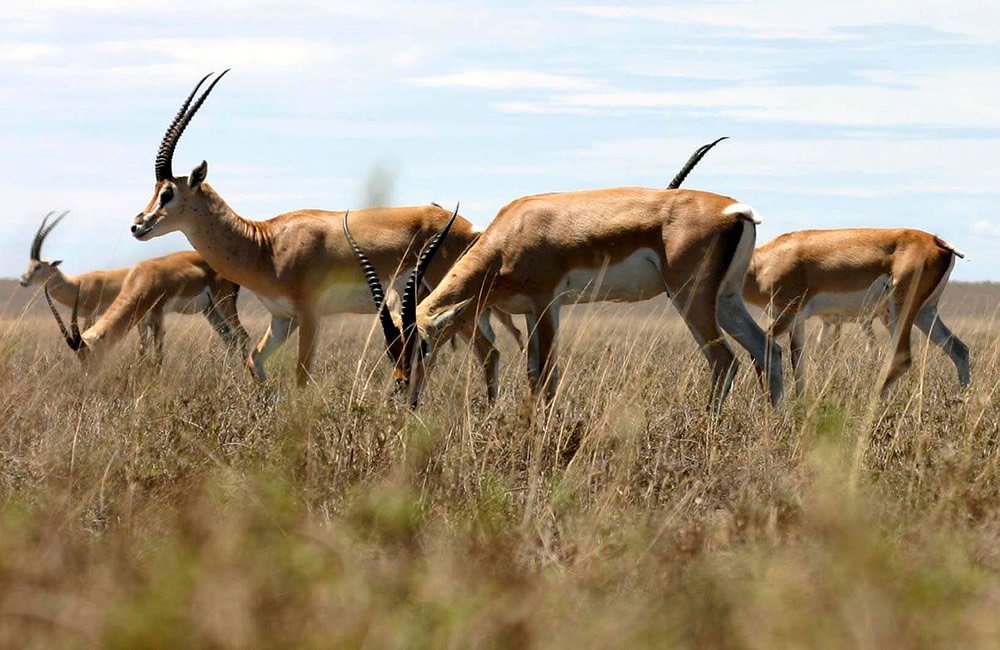 The term natural selection has been defined clearly for over 150 years. Charles Darwin put the term in the title to his book On the Origin of Species by Means of Natural Selection, and he articulated what he meant in the text of his seminal work:

But if variations useful to any organic being do occur, assuredly individuals thus characterised will have the best chance of being preserved in the struggle for life; and from the strong principle of inheritance they will tend to produce offspring similarly characterised. This principle of preservation, I have called, for the sake of brevity, Natural Selection.1

Evolutionists to this day define it much the same way (but without the Victorian verbosity):

The differential survival of and/or reproduction of classes of entities that differ in one or more characteristics.2

Furthermore, as biblical creationists, we must affirm that the term natural has been used from the earliest days of formal scientific inquiry to describe God’s upholding of the universe through the laws of nature. For the Christian, nature is simply shorthand for God’s providential operation of the creatures and creation we see around us.6 In our example above, the culling of the sickly gazelle removes its unique genetic contribution from the overall genetic pool of the gazelle population, potentially preventing propagation of its genetic mutations from spreading.

In addition, repetition of this predation cycle over time could alter the ratios of genetic varieties in the gazelle species, potentially leading to the formation of a new species. Thus, natural selection is an observable fact that can participate in the process of variation and speciation within the original kinds of animals that God created.

Unfortunately, evolutionists have taken a straightforward truth and co-opted it for their anti-biblical purposes:

[Natural selection] provided an entirely natural, mechanistic explanation for adaptive design that had been attributed to a divine intelligence.7

The misuse of this term shouldn’t intimidate biblical creationists. After all, people have been co-opting terms for anti-biblical purposes for millennia. Even today, unbelievers justify gay “marriage,”8 abortion,9 and all sorts of other sins in the name of “Christianity.” Yet no Bible-believer would logically conclude that, because sinners wrap the cloak of “Christianity” around their vices, the entire Christian religion should be thrown out. Instead, we would all agree that the abusers of the term should be exposed, and the correct definition should be restored and emphasized to prevent error from spreading.

Natural selection is a fact, but Darwinian evolution from a universal common ancestor is not.

Furthermore, natural selection—the survival of the fittest to reproduce—actually works in the opposite direction of molecules-to-man evolution. Natural selection eliminates variety, and goo-to-you evolution requires an ever-increasing growth in variety.12 Thus, natural selection is a fact, but Darwinian evolution from a universal common ancestor is not—despite the evolutionists’ best attempts to use the former to prove the latter.

Nevertheless, some biblical creationists have fallen into the evolutionists’ equivocation trap and have attempted to refute evolution by throwing out the concept of natural selection entirely. On occasion, we are asked what we think about such efforts. In short, while well intended, such attempts end up being logically unsound, scientifically erroneous, and theologically deficient.

At first pass, these arguments have an intrinsic appeal. For example, Randy Guliuzza,13 a medical doctor and engineer by training, has prominently appealed to design analogies to argue against the existence of natural selection and for a process that he terms “programmed filling.”14

According to Guliuzza, in the human design process, it’s the engineers who do all the work in trying to solve a problem, and the problem contributes nothing to the solution. Extrapolating this process to our gazelle example above, Guliuzza would argue that the gazelle represents the engineer, and that the life-and-death attack by the cheetah represents the problem to be solved. Therefore, Guliuzza would argue that the survival of the gazelle depends entirely on the gazelle’s ability to “solve” this “problem” and has nothing to do with the environment.

In fact, Guliuzza takes his analogy so literally that he has denied any role whatsoever for the environment:

Whether creatures live or die depends on their ability to generate information from their DNA to produce specific traits that fit environments . . . diversity depends solely on variables inside the creature.15

He even denies the existence of natural selection:

While Guliuzza is well intentioned in his efforts to rebut evolution, his analogy fails on several counts.17 First, creatures are not human engineers—by definition. In our example, the gazelle cannot, by sheer will, change its DNA to improve its metabolism, restructure its physiology, and grow longer legs to outrun the cheetah. Furthermore, creatures reproduce, and engineers rarely have to solve problems with self-replicating devices. In our example, even if the gazelle could change its DNA, grow longer legs, and survive, how would that information be passed to its offspring? For that to happen, changes would also have to occur in the animal’s egg or sperm.

Second, even if we loosen the analogy and make God the ultimate “engineer,” God is not a human engineer (he’s much greater), and his creation and design acts encompass more than animals. He designed the environment as well, and he sovereignly rules it and even summons it on occasion to perform his will (e.g., the flood, the Red Sea crossing, etc.). To say that a creature’s survival has nothing to do whatsoever with the environment is to rob God of his glory. It’s not the fault of Pharaoh’s soldiers that they drowned. Their death is not a failure to adapt, a failure to remember to wear buoyant armor, or a failure to excel in their swimming lessons. Rather, God deliberately killed Pharaoh’s men with the waters of the Red Sea as an act of judgment on them and an act of salvation on Israel.

In our example above, confusing causality also misses explicit Scriptural truths about the acts of God in history. Since the gazelles and the cheetah are modern, post-Flood creatures, they exist in a world judged by God at the fall (Genesis 3). As we all know, death and bloodshed are part of the curse under which we still live, and the purpose of the curse is an ongoing reminder of the realities of sin, of God’s anger against sin, and of the need for salvation. To blame the death of the gazelle on a failure of the gazelle to grow longer legs—rather than on the deliberate design of the cheetah to kill (in a fallen world)—is to miss an important reminder of critical gospel truths.

Aspects of animal diversity do depend on more than variables inside creatures.

Environmental variables also participate in the expression of more visible traits. For example, in certain bird species, the action of sea water initiates the expression of a salt gland. Though the gland is encoded by the creature and not by the environment, the gland doesn’t become expressed until environmental variables (e.g., salt water) trigger its appearance.19 Clearly, aspects of animal diversity do depend on more than variables inside creatures.

In short, biblically, Guliuzza’s claims deny that God sovereignly uses the environment and the natural order to accomplish his work in the post-fall world in which we live. Scientifically, his claims are demonstrably false by virtue of prior scientific findings that are both testable and repeatable.

Thus, the process of natural selection—the survival of the fittest to reproduce—is a fact that highlights the providential care of God over a fallen creation and brings glory to his power, judgment, and salvation. We embrace the proper use of this term, and we reject Randy Guliuzza’s erroneous claims about the nonexistence of natural selection.