Give Now
The Origin of Species After the Flood

How Species Arose After the Ark

by Dr. Nathaniel T. Jeanson on July 23, 2016
Featured in The Origin of Species After the Flood
Share:
Email Using:
Gmail Yahoo! Outlook Other

In this series, we have derived the fact of speciation within the young-earth creation view, and we have observed several lines of evidence supporting or consistent with the recent origin of species.

The major remaining question is how tens of thousands of species could arise in a few thousand years.

To skeptics of the Scriptures, producing so many species in such a short time span—short as compared to the evolutionary time span—seems implausible. Laying aside both Darwin’s breed-species analogy and the mitochondrial DNA clock data, critics of young-earth creation don’t see how biological change can happen so quickly. To them, we haven’t witnessed 10 species form in the last few thousand years, let alone tens of thousands.

These skeptics forget the evidence right under their nose. While the origin of over 30 living cat species might appear to require significant morphological changes, visible variety of a much greater magnitude can arise in an even shorter frame of time. For example, a frog begins its life as a fertilized egg—as single cell. No limbs, head, eyes, tongue, long toes, and so on are visible at the single-cell stage. Yet, in the process of development and maturity that spans less than 3 years, these anatomical features are formed. This progression from a single cell to an adult frog represents far more visible change than the process of forming new species from the kinds on board the Ark. Thus, when the skeptic claims that we’ve never witnessed the amount of morphological change required by the young-earth speciation model, the skeptic does so by ignoring the familiar process of development. 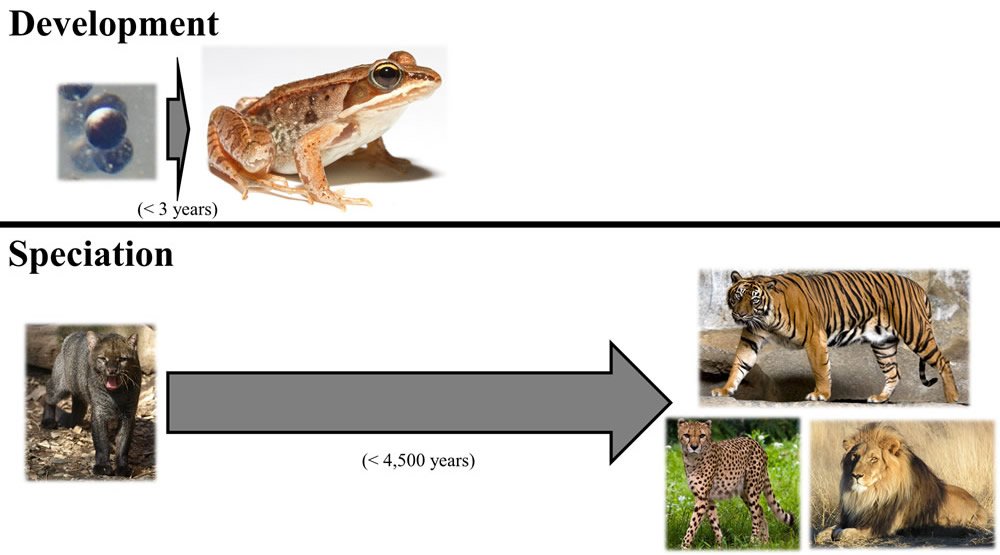 Nevertheless, the skeptic might insist that the process of development is primarily controlled by a different set of instructions than the process of speciation. This claim is indeed true. Development proceeds according to the epigenetic information in the cell,1 but speciation is a primarily genetic phenomenon. Therefore, when discussing speciation post-Flood, our primary concern should not be the formation of new visible features; it should be the origin of genetic differences among species.

The Genetics of Species’ Origins

However, this claim is ill-informed. One of the genetic observations that we made previously is all the more relevant here. In a prior post, we observed that mitochondrial DNA acts like a clock. As the rungs of the DNA ladder change with time, the length of time that a species has been on the planet is recorded.

When we perform a similar clock analysis on the rest of the DNA sequence (e.g., the sequence in a cellular compartment termed the nucleus), we don’t reach the same conclusion. For example, using the rate at which copying errors are made in the billions of DNA letters in the human nuclear DNA sequence, it is not possible to produce millions of DNA differences in a few thousand years.3 Similar results hold true in other species.4 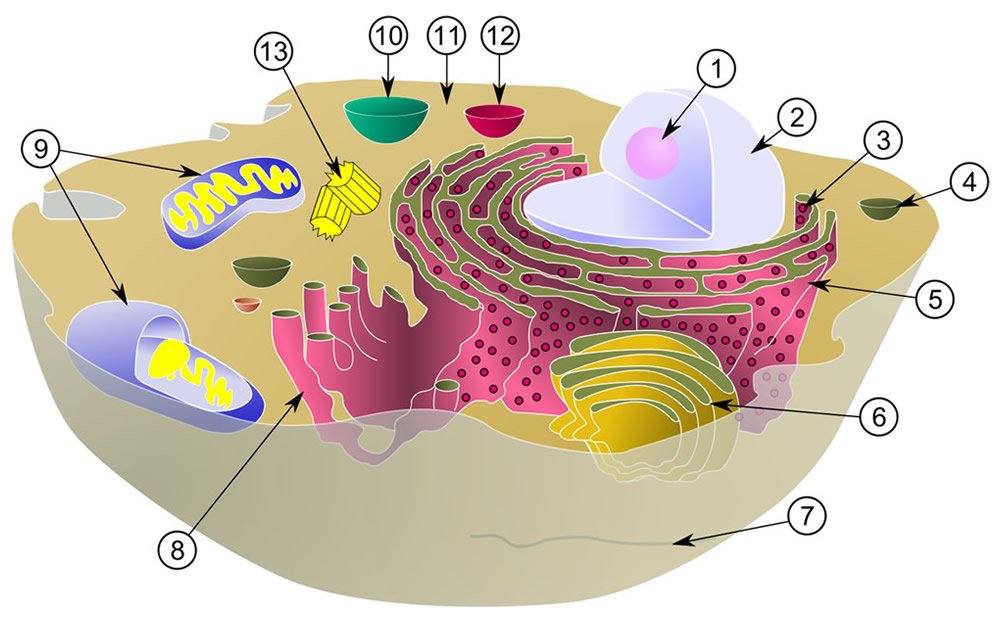 Image by MesserWoland, via Wikimedia Commons.

At first pass, this may suggest that one of the clocks must be wrong. Upon further reflection, we reach a different conclusion.

With a little more information and contemplation, it’s not hard to see how both of these timing devices display accurate information. The oven clock measures how much time has passed since noon; 2 hours and 57 minutes have elapsed. In contrast, the time display on the microwave represents the remaining minutes and seconds on the timer—1 more minute and 22 seconds will expire before the timer sounds. Both display a correct measure of time, but each begins from a different starting point and has a different goal. 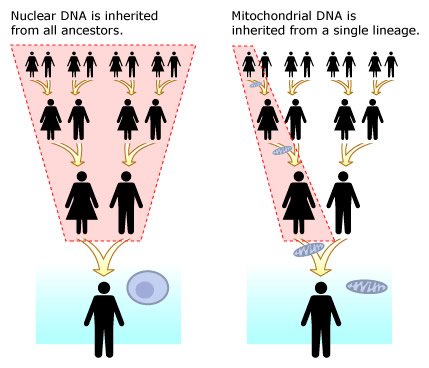 Image by PaleoBioJackie, via Wikimedia Commons.

This latter biological fact illuminates another potential source of DNA variety. When God created Adam and Eve, He would have created them both with mitochondrial DNA. However, only Eve would have passed on her mitochondrial DNA to her offspring. All the differences we see today are the results of errors in copying Eve’s original sequence.5 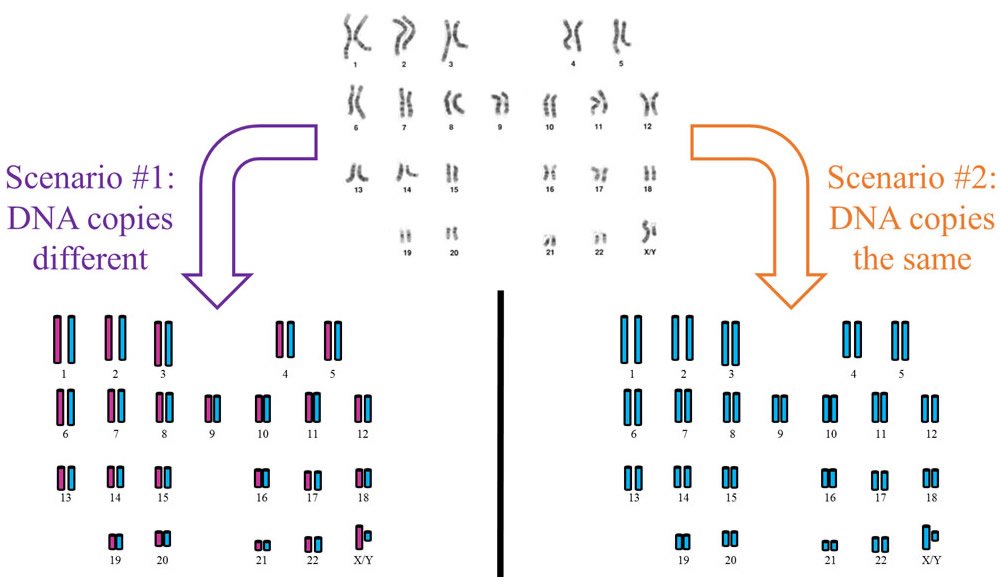 Conversely, the nuclear DNA starting point I just described easily accounts for the millions of DNA differences that exist among humans today. Copying errors are unable to explain the vast amount of DNA differences we see today because the vast majority of these differences are not the product of error, but of deliberate design.8

Since only about 1,660 years passed between the Creation event and the Flood, most of this variety would have been carried on board the Ark. Being so shortly removed from the perfect creation, it’s not hard to believe that significant population growth in these animal kinds occurred. As we observed in a previous article, massive amounts of population growth can happen in a very short amount of time, even in slowly reproducing species. Under this scenario, straightforward population modeling indicates that very little of the created genetic differences would have been lost prior to the Flood.9

Once the animals stepped off the Ark, their reservoir of DNA differences could have easily translated into a massive amount of morphological change. This fact is best illustrated by a consideration of a recent objection to the young-earth creation view of speciation. Over a decade ago, one of the main complaints that could be levied was based on the function of the DNA letters. Actually, it was the apparent lack of function of DNA differences. When the sequence of the billions of human DNA letters were first elucidated in 2001, many in the scientific community concluded that the vast majority was “junk”—useless leftovers from the human evolutionary process. Presumably, similar amounts of “junk” DNA existed in other species as well.

However, this claim was not based on rigorous laboratory testing of the billions of DNA letters in the human DNA code. Instead, it was based on appearance—to evolutionary scientists, the DNA “looked” as if it were non-functional. Since 2001, a large body of laboratory (e.g., experimental) evidence has accumulated. While preliminary and largely biochemical, this evidence has a trajectory suggesting that that vast majority of human DNA is, in fact, functional. With a few more years of experiments, the evidence for function will likely increase.

In addition, this trajectory seems to be true of other species. As more functional testing has been performed in non-human species, more evidence for DNA function has accumulated. Hence, the long-held ideas of how DNA works and how much of it is functional have undergone a massive shift within the last decade.10

These results have profound ramifications for the speciation question. Since DNA now appears to be extremely functional, it would seem that the production of a new species would simply require a few DNA differences to arise.

In fact, as we observed earlier, millions of DNA differences separate species within a kind.11 A massive potential for speciation exists all over this planet.

Let’s put all the pieces of this genetic puzzle together. Mitochondrial DNA is inherited uniparentally—from only one of the two parents, the mother. Consequently, it is a very effective yet simple time keeper for elucidating the time when species originated. As copying errors have occurred over multiple generations, the mitochondrial DNA “clock” has ticked off the time since species first arose. This clock indicates that species originated within the last few thousand years.

The rest of the DNA sequence within a creature (e.g., the nuclear DNA) is inherited from both parents. Because of the biparental manner (e.g., from both parents) in which this DNA is inherited, God could have created the kinds with DNA differences from the start, and at least two independent lines of evidence argue that this is true.12 Thus, nuclear DNA also records a timeline pointing to a recent origin for species, a timeline that makes testable predictions.

Conversely, the fact that so many nuclear DNA differences were present from the start has tremendous implications for the plausibility of speciation on the young-earth timescale. With millions of DNA differences—massive amounts of DNA variety—encoded into each kind from the start of their existence, the potential for speciation is mind-boggling. Combined with the fact that species can recover enormous population sizes in very short amounts of time, in addition to the fact that the vast majority of DNA sequences within a creature appear to be functional, these results demonstrate that millions of species in a few thousand years is not only plausible, it is also probable.

Previous Article Getting Enough Bodies Next Article Did Natural Selection Play a Role in Speciation?