Which Animals Were On the Ark with Noah?

Stepping Back in Time

by Dr. Nathaniel T. Jeanson on May 28, 2016
Featured in The Origin of Species After the Flood
Also available in Español
Share:
Email Using:
Gmail Yahoo! Outlook Other

As we observed in our previous article in this series, for many readers of Genesis 6–9 the account of Noah’s Ark contains deep mystery. Which animals boarded the Ark with Noah? Did any of them fail to make it? Could millions of animals really have squished themselves in Noah’s ship for a yearlong voyage in the rough and open seas?

Though Genesis 6–7 do not enumerate the creatures on the Ark with Noah, these chapters give us clues to their silhouettes.

The images that emerge are striking.

What Does Min Mean?

The most important Scriptural clue stems from the Hebrew word min, which English Bibles typically translate as kind. Though the word min occurs only 31 times in the Old Testament, these uses are enough to reveal a clear meaning. Just like the English language, the contexts in which min is found illuminate its interpretation.

The use of min in Genesis 6–7 is the most relevant for our purposes. In verses 19–20 of chapter 6, when God commands Noah to bring animals on board, God says,

Why would God stipulate that both male and female of the kinds be brought on board the Ark? In the long term, an important function would need to be fulfilled—“to keep seed alive upon the face of all the earth” (Genesis 7:3, KJV). The Hebrew word translated seed1 is elsewhere used to obviously denote offspring (e.g., see the promises of God made in Genesis 3:15 and 13:16). Hence, Noah brought males and females on board the Ark for the purpose of reproducing after the Flood in order to preserve the lineage of each kind.

Noah brought males and females on board the Ark for the purpose of reproducing after the Flood in order to preserve the lineage of each kind.

This conclusion has profound ramifications for identifying what the kinds may have looked like. Back then, individuals within kinds would have been reproductively compatible with each other. Today, if two individuals can produce offspring, this would suggest that they’re part of the same kind. Furthermore, even if two individuals are classified as separate species,2 the production of offspring by the hybridization of these two species would argue that they belong to the same kind.

This hybridization test for identifying kind membership has its limits. Failure to produce offspring does not constitute sufficient evidence to put two individuals in separate kinds. Since many biological reasons exist for the inability to hybridize, these reasons would all have to be eliminated before inability to hybridize could be used as a criterion for distinguishing kind membership. Thus, hybridization is useful primarily as an inclusive criterion, rather than an exclusive criterion, for determining kinds.

As an illustration in the human realm, living humans of all ethnicities are reproductively compatible and are, therefore, classified as a single species that arose from a common ancestor. No ethnic group is biologically unable to reproduce with another ethnic group. However, regardless of ethnicity, a brother and sister who married today would likely bear children with birth defects—if they could bear children at all. Parents who are siblings share too many of the same genetic mistakes to consistently produce healthy offspring. Yet no one would claim that these siblings did not have a common ancestor—after all, by definition they have the same parents! Similar phenomena can occur in the animal realm. Hence, genetic incompatibility can prevent hybridization from happening independent of any discussion of common ancestry and kind membership.

Nevertheless, based on the positive evidence of successful hybridization,3 the kind level is currently best approximated by the level of family.4 Though many species have yet to be tested for ability to interbreed, the results obtained thus far indicate that family is a good approximation of where the kind boundary might lie in most cases. Hence, when Noah took two of every kind on board the Ark, he likely took just two members of each group of creatures that we would today label as part of the same family.

Practically, this fact begins to outline the appearance of the kinds on board the Ark. Today, the diversity of features within a family is stunning. For example, all cats large and small—from housecats to lions and tigers—belong to the same family.5 Stripes, large bodies, small bodies, spots, rosettes, short tails, long tails, and stumpy tails (e.g., the bobcat) are just a small sample of the variety that exists within this family. 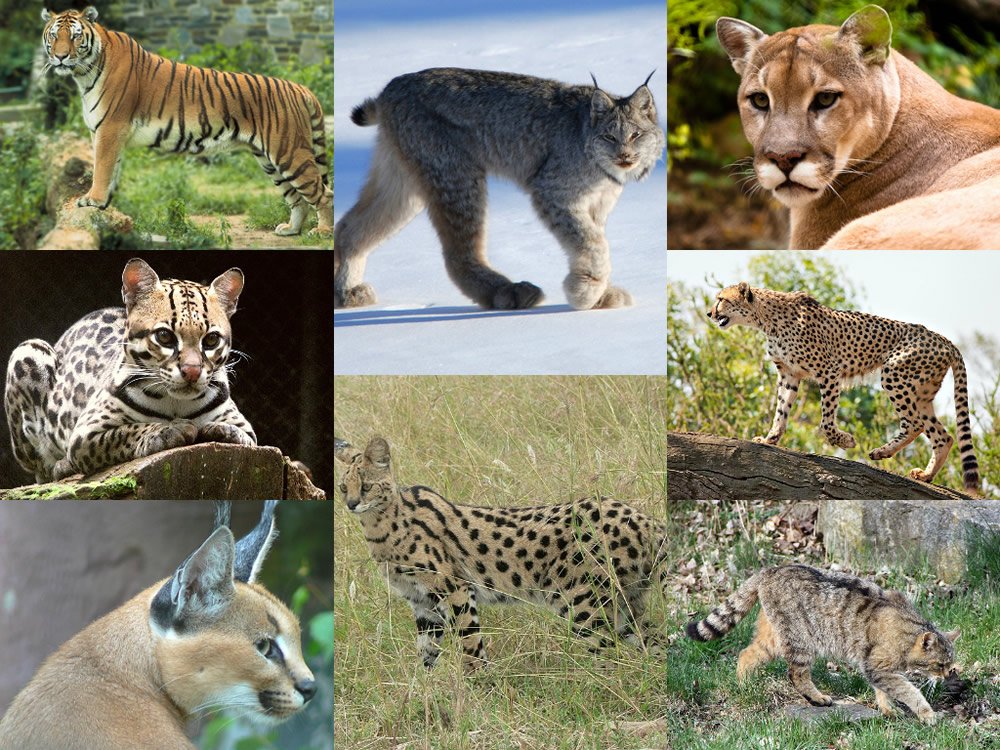 The Felidae. Image by LittleJerry, via Wikimedia Commons.

The cat kind represented on board the Ark probably didn’t look like a mix of every one of these features. Instead, if we identify which features all cats have in common, we begin to form an idea of what the cats on the Ark might have looked like.

Limits to the Kinds

Does the kind to which cats belong include non-cat-like creatures as well? Could we look to non-felid species for clues on what the ancestor to cats resembled? For example, would features specific to horses inform the silhouette of this ancestor? A second aspect of the contextual use of the word min in Genesis 6–7 answers these questions.

In addition to the command to bring male and female, God also commanded that representatives of every kind be brought on board the Ark.

To be sure, the passage in Genesis 6 limits the “every” to “of the birds after their kind, of animals after their kind, and of every creeping thing of the earth after its kind.” Noah didn’t take fish or whales or barnacles on board the Ark. After all, God’s judgment was a flood, not a fire or drought. For purposes of keeping their “seed” alive, aquatic kinds could survive in the water.

Furthermore, Genesis 7:15 says that “they went into the ark to Noah, two by two, of all flesh in which is the breath of life.” The phrase “breath of life” is debated among Hebrew scholars. Whether it includes or excludes creatures like insects, spiders, snails, and other small invertebrates (e.g., creatures lacking a backbone) remains to be seen.

If we limit our discussion to the vertebrates (e.g., creatures possessing a backbone), Noah would have taken on board mammals, amphibians, reptiles, and birds. Again, only the terrestrial or aerial creatures would have made the boat. The aquatic members of these groups of creatures could have survived the Flood outside the Ark.

But why bring two of every kind of the terrestrial and aerial vertebrates? Why not bring two of just some of these kinds?

If kinds could be transformed into other kinds, this command would not be necessary. If members of the elephant family could change into one of the frog families, why bring members of each family on board the Ark? Thus, this second aspect of the commands to Noah reveals that a definite limit to kinds exists.

Based on the general rule of thumb identified from the hybridization test, the species in the families in each of these categories belong to the same kind.

Applying this fact within the context of the biological classification system further illuminates where this boundary might exist. For example, among mammals, terrestrial (e.g., cats), aerial (e.g., bats), and aquatic (e.g., whales and dolphins) species exist. Based on the general rule of thumb identified from the hybridization test, the species in the families in each of these categories belong to the same kind.

The next level of classification above family is the rank of order, and above the rank of order is the classification rank of class. Cats, bats, whales, and dolphins all belong to the same class, Mammalia. Since whales and dolphins are aquatic, they would have survived the Flood outside the Ark. If the classification level of class represented the kind boundary, then mammals would constitute a single kind. Since this kind already has aquatic members, and since the Ark’s purpose was the survival of non-aquatic creatures, the mammal kind would not need the Ark to survive. In other words, if whales and dolphins belong to the same kind as cats and bats, Noah would not have needed to bring any mammals on board the Ark.

If we step just one rank higher, the next level of classification is phylum. Mammals, amphibians, reptiles, birds, and fish all belong to the same phylum, Chordata. Since fish are aquatic, they would have survived the Flood outside the Ark. If fish belong to the same kind as mammals, amphibians, reptiles, and birds, Noah would not have needed to bring any vertebrates on board the Ark.

If the kind boundary is indeed at the level of class or phylum, this would throw the entire Genesis 6–8 narrative into confusion.

So what? If the kind boundary is indeed at the level of class or phylum, this would throw the entire Genesis 6–8 narrative into confusion. For example, among the creatures that are alive today, the only terrestrial and aerial ones that we haven’t yet considered in our discussion are invertebrates like insects, spiders, and scorpions. Since these creatures are all generally small, bringing two of each invertebrate class or phylum would hardly necessitate a fishing boat. Hence, if kinds were best approximated by the rank of class or phylum, Noah’s Ark would have been entirely superfluous.

Together these facts demonstrate that kind is probably best approximated by the classification rank of family or maybe order—but definitely not class or phylum. Going the other direction on the classification scale, it also implies that Noah did not bring two of every species on board the Ark. For example, tigers, lions, leopards, and ocelots were probably not specifically present. Instead, Noah likely took two representatives of the cat kind.

Using the family criterion in combination with the “breath of life” criterion, the total number of kinds on board the Ark was low. Today, the number of living mammal, amphibian, reptile, and bird families (including the aquatic ones) is just over 500.6

If we include fossils, the number increases. In relative terms, the increase is significant, but in terms of absolute numbers, the new total represents a small fraction of the diversity of life on the planet. Among mammals, amphibians, reptiles, and birds, the mammals have the most diverse fossil record. Only about 30% of all mammal families that ever existed are alive today.7 Assuming a similar percentage for amphibians, reptiles, and birds, we can estimate how many total families in these groups of creatures ever existed. If 510 families exist in these groups today, and if this represents just 30% of all that ever lived, then a total of 1,700 mammalian, amphibian, reptilian, and avian families8 once existed on earth. This number—1,700—represents an upper estimate of the total number of kinds that Noah took on board the Ark.9

Even if Noah also took terrestrial invertebrates, like flies, ticks, and fleas, these creatures are so small that they would have added little to the total cargo space.

This small gaggle of creatures survived on the Ark for about one year and then exited—at a very specific point in the ancient past.

Next Article When Did the Animals Exit the Ark?