Donate Now
The Origin of Species After the Flood

Stepping Back in Time

by Dr. Nathaniel T. Jeanson on June 18, 2016
Featured in The Origin of Species After the Flood
Share:
Email Using:
Gmail Yahoo! Outlook Other

In our previous articles, we observed that Noah took a few thousand animals on board the Ark about 4,500 years ago. Of the kinds that stepped off the Ark, most went extinct. In mammals, for example, around 70% of the kinds are now extinct. But approximately 30% survived.1

What Happened to Them?

In short, the mammals and other kinds migrated away from where the Ark landed in the mountains of Ararat. Surprisingly, in 1859 when Darwin wrote On the Origin of Species, the phenomenon of migration would have been controversial. In fact, Darwin had to corral several lines of evidence to demonstrate to his opponents that animals did indeed migrate to their current locations. Unlike Darwin’s opponents of 1859, creationists today would agree with Darwin’s conclusion that migration explains the distribution of modern species.

Furthermore, creationists of the present era would freely invoke an Ice Age following the Flood. An Ice Age would effectively move large amounts of water from the oceans (liquid form) onto the land (in the form of ice). As a consequence of this directional movement, the ocean levels would drop, exposing land bridges that are currently submerged.

The kinds on board the Ark were not individual species but, rather, representatives of various biological families.

For example, during the Ice Age, the Bering Strait would have been crossable on foot. Conversely, in Southeast Asia, you could nearly walk from Thailand to Australia. These and other land bridges would have made migration away from Ararat to distant locations all the easier.

However, Darwin’s evidence in favor of animal migration was at the level of species, not families. As we derived in one of our previous posts, the kinds on board the Ark were not individual species but, rather, representatives of various biological families. How could Darwin’s point be relevant to our purposes?

Today, many biological families contain numerous species, implying that new species have arisen since the Flood. Since Scripture never forbids speciation, nothing in the Bible suggests that the formation of new species within a kind is impossible. Thus, speciation within kinds is perfectly compatible with Genesis and with the rest of Scripture.

Conversely, as we observed in a previous post, the fact that Noah was commanded to take at least two of every kind of land-dependent, air-breathing animal on board the Ark implies that kinds have limits. For our purposes here, this implies that kinds cannot be changed into other kinds. If they could, there would have been no need to bring every kind on board the Ark. A handful of kinds would have sufficed if kinds could be effortlessly changed into other kinds following the Flood.

Another previous post anchored this model of limited speciation on a definite timescale. Since the Flood occurred approximately 4,500 years ago, many new species have formed within kinds in just a few thousand years—while one kind has never transformed into another kind. Specifically, assuming (as we did before) that representatives of mammal, amphibian, reptile, and bird families were all taken on board the Ark, the several hundred living families in these 4 groups contain over 33,000 species. Thus, tens of thousands of species have formed in just a few thousand years.

Theoretically, these species could have originated in a variety of temporal patterns. For example, they could have formed in an explosive temporal burst immediately following the Flood.2 If so, this might suggest post-Flood conditions as a catalyst of speciation. Alternatively, speciation might have occurred in fits and spurts, perhaps in a manner correlated with human migrations and conquests. If so, speciation might have a relationship to human activity. 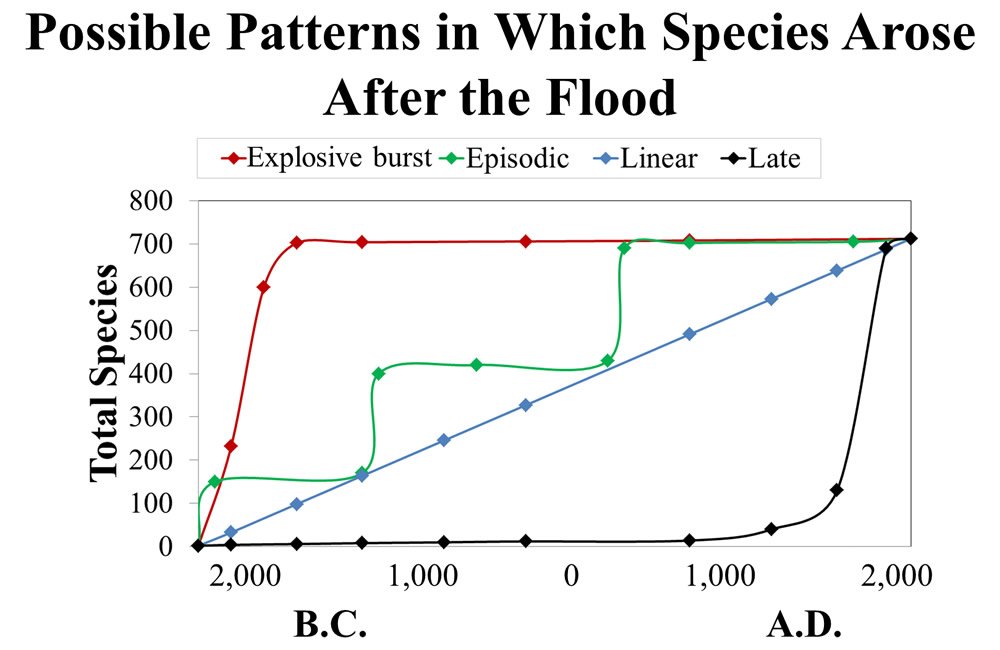 Graph representing some of the possible patterns in which species might have arisen after the Flood. The Explosive burst hypothesis postulates that a large number of species formed quickly in the first few hundred years following the Flood, and then tapered off to a very slow rate. In contrast, the Late hypothesis represents a virtual mirror image of the Explosive burst hypothesis. Under the Late hypothesis, little speciation happened for thousands of years, but then suddenly increased in the last few hundred years. The Episodic hypothesis speculates that speciation happened in fits and spurts over the last few thousand years, and under the Linear hypothesis, speciation has been occurring at a constant, mathematically predictable rate ever since the Flood ended. Adapted from Nathaniel Jeanson, “Mitochondrial DNA Clocks Imply Linear Speciation Rates Within ‘Kinds’,” Answers Research Journal 8 (2015), 288, figure 18.

The actual pattern in which species arose is surprising. Based on genetic comparisons between species, the pattern that emerges is fairly linear.3 In other words, species have been forming in families at approximately constant rates since the Flood.

For example, 55 species in the deer family are living today. Among the species with readily available genetic information, genetic comparisons show a linear pattern of speciation. On the basis of this result, a new deer species appears to have formed approximately every 80 years. 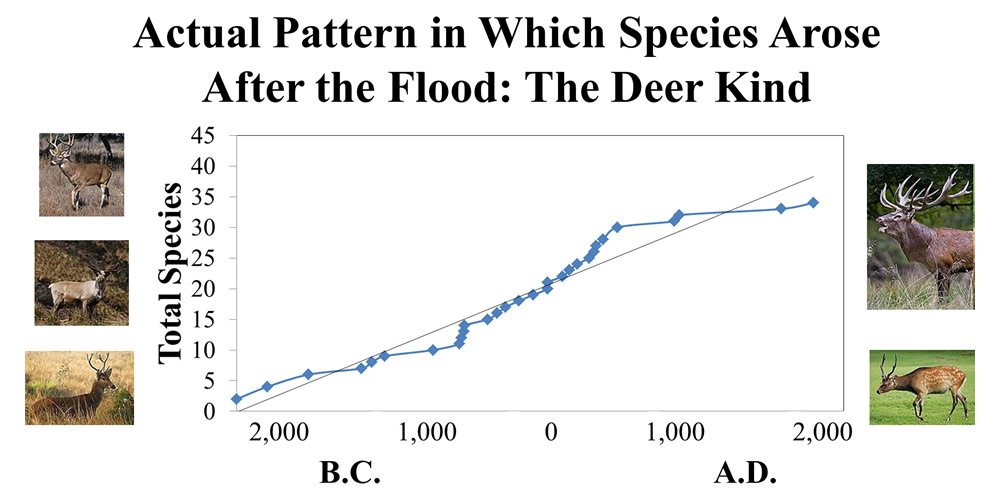 Graph of the pattern in which deer species arose from a common deer ancestor on board the Ark. The thin black line represents the expectations of a Linear speciation hypothesis (see previous image), and the blue diamonds represent individual deer speciation events (e.g., the formation of a new deer species). Since the blue line connecting the diamonds closely matches the gray one, deer species appear to have arisen in a linear manner after the Flood. Representative deer species are depicted along the sides of the graph. Similar patterns exist for other kinds. Adapted from Nathaniel Jeanson, “Mitochondrial DNA Clocks Imply Linear Speciation Rates Within ‘Kinds’,” Answers Research Journal 8 (2015), 291, figure 26.

As another example, in the cat family, 37 species exist today. Based on genetics, they have been forming at a constant rate over the last 4,500 years. In other words, on average, one new cat species has arisen roughly every 120 years.

As a third example, the horse and donkey family (Equidae) contains seven species today. Again, based on genetics, these species have been forming at a constant rate over the last 4,500 years. In other words, on average, one new equid species has arisen approximately every 640 years.

The biblical record of species appearance agrees with these findings.4 For example, Genesis records the existence of donkeys at the time of Abraham. The book of Job, a record of events likely close to the time of Abraham, also records the existence of several species that we would identify as modern, such as horses and lions. The rapid origin of these species might, at first pass, seem to suggest that speciation happened in a quick burst following the Flood, rather than at a constant rate.

A closer look at the data shows agreement between genetics and the Scriptures. In families with many species, the rapid appearance of one species following the Flood does not, in and of itself, refute a constant rate of species formation. In species-rich families, like some rodent families, new species form once every decade—or faster. Hence in the few hundred years between the Flood and Abraham, an abundance of species could form and still be consistent with the constant rate finding of genetics.

The fact that modern-sounding species are mentioned in early post-Flood sections of Scripture is fully consistent with the genetic discoveries about the pattern in which species arose.

The more important question for our purposes is the timing of the split of specific species pairs. For example, since donkeys and horses appear early in Scripture, we should ask whether genetics records a late or early split for these species. In fact, from a genetic perspective, the horse and ass lineages (the ass lineage includes the donkey) split immediately following the Flood. In felids (the cat family), genetics depicts a split between the big cat and small cat lineages that also happens very quickly following the Flood. Hence, the fact that modern-sounding species are mentioned in early post-Flood sections of Scripture is fully consistent with the genetic discoveries about the pattern in which species arose.

The constant rate at which species form has profound implications for the present. First, it implies that species are still forming.5 For example, in felids, since one new cat species has arisen approximately every 120 years, we can expect to see another felid species form in the next 120 years. In fact, in the most species-rich kinds, we can expect new species to form in our lifetimes. For those who are accustomed to thinking in evolutionary terms, this fact will come as a shock.

Second, today’s species have a direct line of descent back to the Ark. This should be obvious from what we already said, but it’s a point worth repeating. Today’s species are the link between the past and the present. The genetics of the species around us today contain the echo of the Ark.

In the realm of speciation, a similar situation holds true. Over time, the rate of speciation within a kind appears to be constant. In felids, for example, as we highlighted above, one new species forms approximately every 120 years. However, the number of species in the family is increasing with time. Hence, in the first few hundred years following the Flood, the few species that were alive all likely formed additional species. Today, among the 37 living species, only one of them will likely form a new species in the next 120 years. The remaining 36 will not. It’s as if the presence of more species dilutes the chance that the remaining species will form a new one.

Unlike the lottery, speciation doesn’t happen because a human individual picks and chooses “winners”—e.g., a population of animals that will lead to the next new species. Instead, something else is happening in the wild. A different sort of process is responsible for speciation, and it appears that increasing numbers of species dampens the effect that this process has on each existing species.

Together, these facts lead to an urgent question. In light of what we discussed in this post and previous posts, tens of thousands of species have formed at a constant rate over the last few thousand years. And they’re still forming today. How?

Previous Article What Happened to the Animals After Noah’s Ark? Next Article Did Darwin Argue That Species Originated Recently?