Monogamy: Is It Rooted in an Evolutionary Past?

Is human monogamy God’s idea, or merely an evolutionary byproduct?

Birds commonly pair-bond to raise their young, but monogamous relationships are relatively rare among mammals.1 Such “social monogamy”—though not seen in chimpanzees, gorillas, or orangutans—is nevertheless more common among primates than other mammals and presents an evolutionary puzzle. Anthropologist Christopher Opie of University College London notes, “Primates are unusual among mammals because monogamy has evolved independently in all of the major clades [evolutionary lineages].”2 Opie claims to have unraveled the monogamy’s mysterious evolutionary origin.

“This is the first time that the theories for the evolution of monogamy have been systematically tested, conclusively showing that infanticide is the driver of monogamy,” Opie says. “This brings to a close the long running debate about the origin of monogamy in primates.”

Because pair-bonding is common in both birds and primates and because both baby birds and primate infants have relatively long periods of dependency on parental care, many evolutionary anthropologists have suspected the driving force behind pair-bonding involves infant care. Evolutionists who hold that “infanticide-prevention” is the driving force behind primate monogamy, however, maintain that rival males have a vested interest in killing infants in order to steal their mothers.

The leading evolutionary explanations for primate and human monogamy are

Dr. Opie’s team statistically analyzed various primate species. They compared their social and reproductive habits, how long they generally nurse their infants, which parents are involved in infant care, their typical population density and living arrangements in the wild, the likelihood of males to defend females and infants, and the prevalence of infanticide by male perpetrators. They then correlated these characteristics with the currently accepted primate evolutionary tree, extrapolating backward to determine when they think each behavior evolved.

Opie’s group suspects that paternal assistance with infant care and male mate-guarding behavior evolved as consequences of pair-bonding, rather than serving as the evolutionary stimulus for it. Conversely, they conclude that infanticide evolved prior to the switch to monogamy in each primate lineage. Thus, their paper, just published in Proceedings of the National Academy of Sciences, is titled “Male infanticide leads to social monogamy in primates.”

Given the importance of infant survival, Opie’s team is puzzled as to why more primate species—particularly those commonly considered humanity’s close cousins—haven’t made the switch to social monogamy. They write, “This question becomes particularly relevant when considering the extraordinarily high rates of infanticide in species such as gorillas and langurs, where it has been estimated that infanticide accounts for between 34% (in gorillas, Gorilla gorilla beringei) and 64% (in langurs, Semnopithecus entellus) of all infant deaths. One would expect a strong pressure for these species to opt for social monogamy if it is an effective defense against infanticide.”3 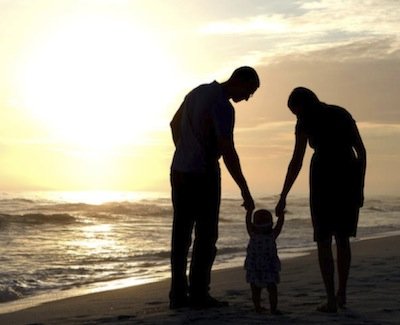 Evolutionary anthropologist Christopher Opie maintains that relationships like that depicted in this scene—in which monogamous parents nurture their child—evolved to protect babies from murder. Image: sframe/Fotolia through www.sciencedaily.com

The authors contend that the evolution of larger brains “in great apes (and especially humans) has led to very long lactation periods and heightened risk of infanticide,”4 possibly because the female's fertility and availability as a mate is decreased during this time. Certain that infanticide was the evolutionary driving force for primate monogamy, they propose that “human pair bonds may also be a response to the pressure that long infant dependency places on females to find effective protection for their young.”5 They claim that australopithecines were monogamous to support their position.

The social behavior of extinct fossilized individuals is, as another researcher team noted in a 2010 study, “notoriously difficult to predict.”6 Nevertheless, they do so, because they believe that “predicting social systems of extinct primates and hominins is crucial for understanding human paleobiology.”7 Their contention about the monogamous nature of australopithecines—extinct apes currently held by many evolutionists to be distant ancestors of humans—is derived from male/female comparisons such as the proportional lengths of fossilized finger bones. Asserting that less dramatic skeletal dimorphism (male-female differences) indicates social monogamy, some evolutionists maintain that such finger bones point to a monogamous lifestyle for Australopithecus afarensis (Lucy) but a polygamous life for Neanderthals.8

The writers of the current study conclude, “The transition to social monogamy in humans has been proposed to depend on females choosing to stay faithful to males, even when of lower quality. Once in place these pair-bonds would facilitate paternal care in the form of male protection and provisioning. Male infanticide could thus have been the pressure that drove females as well as males to stay in long-term consortships or bonds.”9

“What makes this study so exciting is that it allows us to peer back into our evolutionary past to understand the factors that were important in making us human,” says coauthor Susanne Shultz. “Once fathers decide to stick around and care for young, mothers can then change their reproductive decisions and have more, brainy offspring.”

Interestingly, a Cambridge team using similar methodology has recently arrived at quite different conclusions. Authors Dieter Lukas and Tim Clutton-Brock assert that mammalian monogamy in general—including that among non-human primates—evolved where territorial constraints made males unable to monopolize and defend multiple mates. They exclude humans but say humans shouldn’t be considered monogamous because their supposed near-relations among African apes—and therefore their common ape-like ancestors—are not monogamous.10

Opie and his colleagues (as well as the Cambridge team) base their “conclusive findings” on several false foundations. First of all, they assume that all behavior must have an evolutionary explanation. Secondly, Opie’s team presumes that murder was a part of human nature from the beginning. Thirdly, they presume that primates and humans evolved from ape-like ancestors. All three of these presumptions deny biblical truth and lack any verifiable scientific evidence. Finally, the authors ignore the biblical historical record of the origin of monogamous human relationships and the basis for faithfulness and commitment in marriage.

Opie and his coauthors claim to know the evolutionary underpinnings for the presence of monogamy in many primate species but conveniently make exception for those polygynous11 “great ape” species commonly considered humanity’s “nearest relatives.” They extrapolate the behavior of various primate species to an evolutionary timetable and assert that the derived time answers the question of when certain behaviors “evolved.”

Explaining away the obvious failure of humanity’s “nearest evolutionary relatives” to arrive at the same evolutionary solutions as ancestral humans, they claim that our rise to human-status depends on a past in which vicious males were prevented from destroying babies by hominid fathers eager to protect their faithful females and their helpless little ones from marauders. Thus, this entire evolutionary scenario—like all evolutionary scenarios—is ultimately based on time and death.

A Noble Institution, with Meaning and Purpose

God’s best plan for human marriage is the monogamous committed union of a man and a woman.

The Bible provides us with God our Creator’s historical account of our origins, including the origin of human monogamy. On the sixth day of Creation week, about 6,000 years ago, after creating all kinds of land animals, God created the man Adam in His own image. Man did not evolve from any sort of ape-like raw material over millions of years but was created distinct from animals on the same day. And while God’s Word does not specify the social instincts God placed in every sort of animal, it does tell us that God’s perfect plan for human families involved the committed marriage relationship between one man and one woman for life.

Genesis 2:18–25 informs us that when Adam named the beasts and the birds he saw that there was no helper comparable to himself. God then designed Eve to be the partner perfectly suited for Adam. God our Creator made clear that this plan was also the perfect plan for forming future marriages and families. Jesus Christ, the Son of God, confirmed that God’s plan for marriage had not changed (Matthew 19: 4–6).

Biblically, marriage is meant to reflect the complementary roles of the co-equal persons of the Triune God (as Genesis 1:26–27 says, “let Us make man in our image . . . in the image of God He created him, male and female He created them”). Marriage is also meant to reflect the union of Christ with the church (Ephesians 5:22–33) and provide a stable place in which children can grow into mature, responsible adults and best learn God’s truth (Ephesians 6:1–4). Though for 6,000 years we as sinful selfish human beings have frequently wrecked lives, perverted God’s truth, exploited one another, and—through our own faithlessness and failure—distorted the lessons and protection biblical marriage is meant to provide, God’s truth has not changed. We do not need an evolutionary fairy tale built on a stack of insupportable assumptions to explain why God’s best plan for human marriage is the monogamous committed union of a man and a woman. We have God’s own Word on the subject.

Previous Article Are We One of Many, or Did God Design the Universe with Physics That Actually Works? Next Article Evolution Through the Eye of the Beholder