The Importance of Missing Links

No matter how hard they try, scientists can’t connect the missing links in human evolution. Why not?

You have seen the famous image and its many parodies, haven’t you? Four men marching confidently in single file. No, I am not talking about the cover of the Beatles’ Abbey Road album, but that other iconic image—the illustration of human evolution. It’s supposed to represent a scientific truth, but how much of this image is based on fact and how much is based on imagination? The answer has more important consequences than you might think.

Have you ever sent your children to the cupboard to find a snack? You had a whole-grain snack bar in mind, but they came back with a fistful of gummy bears. We tend to look for what we want to find. That’s often true in scientific research, too. Most anthropologists, for example, start with the assumption humans evolved from apelike creatures. Then when they find fossils with characteristics that appear to lie between those of modern apes and humans, they label them transitional forms or missing links in the imagined evolutionary chain of being.

Dr. David Pilbeam, curator of paleoanthropology at the Peabody Museum of Archaeology and Ethnology, agrees: “The theories [of human evolution] are more statements about us and ideology than about the past. Paleoanthropology reveals more about how humans view themselves than it does about how humans came about. But that is heresy.” This statement from a prominent evolutionist is an important reminder that facts don’t speak for themselves—we interpret them based on our starting points.

Christians should take every thought captive to the obedience of Christ (2 Corinthians 10:4–6), using the Bible to frame our thinking about the origin of humans. When we start from what Scripture clearly states, human evolution is out of the question. And if humans did not evolve from apelike creatures, then no missing links exist.

How can anyone speak so confidently against evolution? Because God has documented what happened with absolute clarity. In Genesis 2, we see the special creation of Adam from the dust of the ground. This passage emphasizes God’s unique, intimate action in forming the first man, as it later emphasizes the special creation of the woman from his side. God’s hands-on intervention is a far cry from evolution’s random processes. Later prophets and psalmists make the same emphasis, comparing God’s actual, historical molding of Adam from the dust to his work as a potter molding mankind from clay. We are not the result of mindless interactions over billions of years, but the special creations of a God who loves and cares for his creation.

So what do we do with the claims that Lucy or another hominid fossil is our grandma? First, we must remember that everyone brings a bias when answering questions about human origins. Second, we must ask how they know what they claim to know.

When scientists discover a new fossil, they don’t find a label with the scientific name as we find in museum displays. Scientists assign a name later and attempt to determine the new fossil’s relationship to other fossils by secondary means. The evolutionist who believes that all life on earth is related will use an evolutionary filter to process the evidence. Since apes and humans are supposedly related, evolutionary researchers will consider any human-like features in ape fossils to be a transition toward becoming more human. They will find what they are looking for since evolution is already true in their minds.

Furthermore, evolutionists propose different explanations for how humans evolved, so they draw different family trees to connect the same fossil specimens. And the interpretations change over time. The primate branch of the family tree looks much different in textbooks your children might use than it did in yours. The evolutionary claims are much less certain than most authors let on.

For the biblical creationist, there are no missing links. It is either ape or human—not a transition between the two. Instead of branches on one evolutionary tree of life, each created kind should be thought of as its own tree in the orchard of God’s creation. Each tree has a variety of branches, but one tree has never changed into another tree.

While those might seem like minor quibbles over scientific details, they reflect serious concerns. If humans evolved from apelike animals, why ought we to behave any differently than animals? The evolutionist has no real answer to this question. If a chimpanzee can kill a member of a rival tribe, then why is it wrong for a human to do so? The Bible offers a real and consistent answer—murder is wrong because all humans are made in the image of God. To harm image bearers in any way is a sin against the God who created them. But if we accept the idea that humans are just animals at a different stage of evolution, then we have no firm foundation to say that any action is a sin.

And without sin, we do not need salvation from the consequences of that sin. We do not need a Savior. So to believe that the first man was simply an ape whose brain had developed certain abilities leads to denying the gospel. If God did not specially create the first man, Adam, then the last Adam, Jesus, did not need to come and remove the stain of sin. And that is the exact connection the Apostle Paul makes as he explains the heart of the gospel in 1 Corinthians 15. If God didn’t create Adam, then Jesus didn’t need to die for our sins.

So the next time you see the fanciful images of apes turning into humans, remember that they may lead people to deny core truths of Christianity, from original sin to salvation in Christ. The most important link to our origins is the link between Adam and Jesus. We can’t afford to let that link go missing.

What Are All Those Ape-Men? 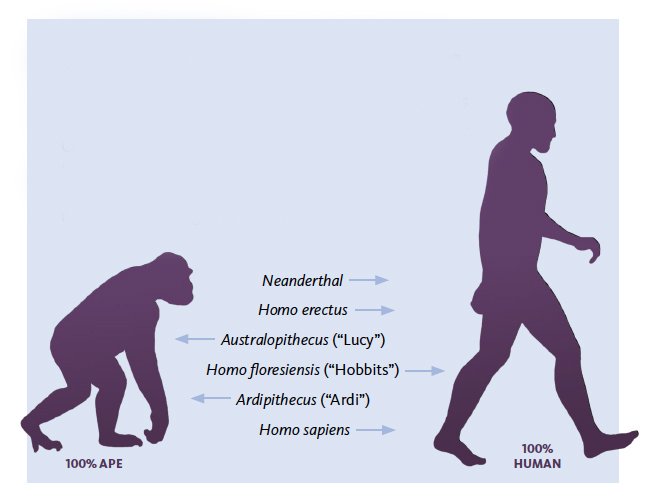 Evolutionists constantly struggle to decide which fossils could fill in the missing links between humans and apes. Creationists, on the other hand, know from the Bible that God created the first humans on the same day as apes, so all fossils belong to an ape or a human, and nothing is “missing” in between.

Roger Patterson taught in public schools for eight years before joining Answers in Genesis. He earned his BS Ed degree in biology from Montana State University–Billings. Roger is author of Evolution Exposed and serves on AiG’s editorial review board.