by Dr. Elizabeth Mitchell on May 5, 2012
Share:
Email Using:
Gmail Yahoo! Outlook Other

April’s annual meeting of the American Association of Physical Anthropologists (AAPA) in Portland, Oregon, devoted a half-day to fossilized footprints. As a part of this “Pleistocene scene”1 graduate student Kevin Hatala presented a comparison of the footprints of barefoot Kenyan herders with five Pleistocene footprints from Kenya’s Ileret site.

Believed by evolutionists to be 1.5 million years old, the footprints were initially thought to “reflect a thoroughly modern walking style.” Comparison of the footprints with those of 38 habitually barefoot Daasanach Kenyan herders, however, with measurements of print depths at ten pressure points, suggested a difference in gait.

“We can infer that the ancient Ileret individuals had a normal, functional gait, but they may have walked differently than we do,” Hatala said. He indicated that it’s uncertain just how these hominids walked and whether they belonged to Homo erectus, a possible direct human ancestor, or to the side-branch species Paranthropus boisei.

The Kenyan herders placed their prints in moistened sand thought to mimic the quick-setting sand in which the original prints were made. Analysis suggests the prints’ owners were walking, not running, and that they were about 5 feet, 6, inches tall, weighing 110 pounds, matching Daasanach people of today. 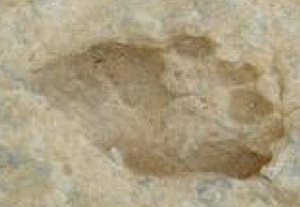 Fossilized footprint from Ileret, Kenya, said to be suggestive of a bipedal gait differing slightly from modern humans. Image from Matthew Bennett/Bournemouth University at ScienceNews.

Other highlights of the AAPA’s focus on feet included a discussion of Burtele foot as well as analysis of the likely gait of Australopithecus sediba, another ape fossil we discussed last fall in “Sediba with a Little Sleight of Hand.” The Burtele fossil is dated by evolutionists at 3.4 million years ago, and Au. sediba, around 2 million years. Both of these skeletal specimens differ from humans, but anthropologists suggest they were somewhat bipedal. The Burtele foot could grasp with its big toe and Au. sediba feet, according to Jeremy DeSilva, suggest the owner was prone to hyperpronate (turn its feet inward) as it walked.2 DeSilva said Au. sediba had “a really weird foot. Diversity in upright stances must have extended for a long time during hominid evolution.”

We are not surprised that the anatomy from two ape specimens differed significantly from that of modern humans, and we’ve recently examined the questionable nature of attributing a legitimate bipedal gait to the Burtele fossil and Au. sediba. (See “Transitional Tale Told by Toes” and “Sediba with a Little Sleight of Hand.”)

As to the footprints from Kenya, if they belonged to a truly bipedal individual as Hatala suggests, then they likely were not made by Paranthropus boisei, an extinct ape commonly known as “Nutcracker man.”

And as to the footprints from Kenya, if they belonged to a truly bipedal individual as Hatala suggests, then they likely were not made by Paranthropus boisei, an extinct ape commonly known as “% get_urls 10190 alt="Nutcracker man" %}” although it was neither a nutcracker nor a man. If they belonged to Homo erectus, then slight differences in the pressure patterns on the bottom of the foot do not indicate a less evolved kind of human. We saw last fall a report of some relative shortening in the legs of Neanderthals.3 Slight variations in gait or leg proportions of different groups of humans does not make any of them less than human or show they were evolving on a path toward full humanity. Both Homo erectus and Homo neanderthalensis were humans who descended from Noah’s family following the Flood, people who have disappeared today but were no less human than we are.

Imitating an upright walk would not make an ape more human, and apes are not designed to walk upright efficiently. The skeletal structure of their hips and legs is unsuitable. The preoccupation of evolutionary anthropologists with bipedality springs from a determination to exploit differences between apes and humans in an effort to prove evolution happened and show how. But neither cooking food, nor sleeping on the ground, nor walking upright could transform a hypothetical apelike ancestor into a human being.

God created the first two humans in His image, having unique mental and spiritual attributes, on the 6th day of Creation Week. He made land animals, including apes, the same day, according to Genesis chapter one. And while our Common Designer gave us some similar physical features, He created apes and humans with distinct intellectual and spiritual differences. Nothing in the fossil record or genetics demonstrates human evolution from apelike ancestors. Humanity’s ancestors were Adam and Eve, created by God about 6,000 years ago fully able to walk—no evolution required.