Did “human ancestors” come down from the trees to graze?

Another australopithecine species is in the news for the dietary innovations it supposedly achieved for the human evolutionary story. The only known fossil of Australopithecus bahrelghazali, found in 1993 in Koro Toro, Chad, is a partial lower jaw with seven teeth. Analysis of carbon isotopes in a tooth suggests the owner ate a diet heavy in grasses and sedges. Since australopithecines are considered by most evolutionists to be human ancestors, evolutionists see the discovery as evidence that evolving primates were using their bipedality to exploit new food sources by coming down from the trees to graze. 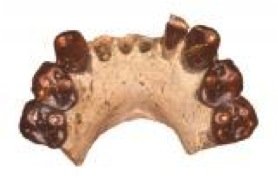 Analysis of a tooth from this jaw found in Koro Toro, Chad, suggests that the original owner consumed a lot of grasses and sedges. The jaw is the only known fossil of Australopithecus bahrelghazali, and some scientists think it may instead belong to the same species as Lucy. Image credit: Michel Brunet at www.sciencenews.org.

Chad is in Central Africa, roughly 1,700 miles west of Hadar, Ethiopia, where the famous Australopithecus afarensis “Lucy” was recovered. Current evolutionary reckoning considers Lucy about 3.2 million years old, and sandstone fossil beds of Koro Toro where Au. bahrelghazali was buried are dated at 3.0–3.5 million years, putting them in the same general evolutionary timeframe as Lucy. Lucy’s diet has yet to be assessed, although some scientists suggest Au. bahrelghazali is really another Au. afarensis fossil.

Whatever sort of australopithecine the jaw may have belonged to, its discoverer Michel Brunet and archaeologist Julia Lee-Thorpe are excited by the possibility that this hominin was out of the trees grazing more than a million years earlier than the other hominin grazer, Paranthropus boisei. That extinct ape is also known as “Nutcracker man” though he was neither a man nor, it turns out, a nutcracker.1 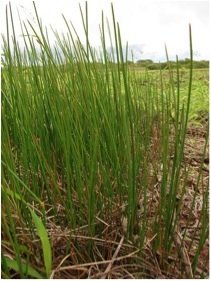 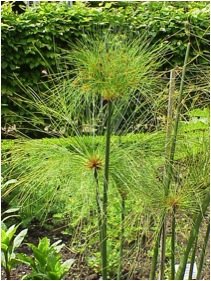 These are typical sedges, spikerushes (left) and papyrus (famed for its use to make a writing surface, on the right). Many sorts of sedges grow worldwide. They resemble grasses but typically have solid triangular stems instead of hollow stems like grasses. Tropical grasses and sedges are able to conduct photosynthesis using the less common C4 pathway—producing four-carbon intermediaries rather that three-carbon ones—which is a more efficient pathway under certain conditions such as drought and high temperatures. Evidence of a higher than usual proportion of carbon-13 in the Australopithecus bahrelghazali tooth suggests that, like the “Nutcracker man,” these apes consumed a lot of C4 plants. Image of spikerush credit: Forest and Kim Starr at wikipedia.org. Image of papyrus credit: Kurt Stüber at wikipedia.org. 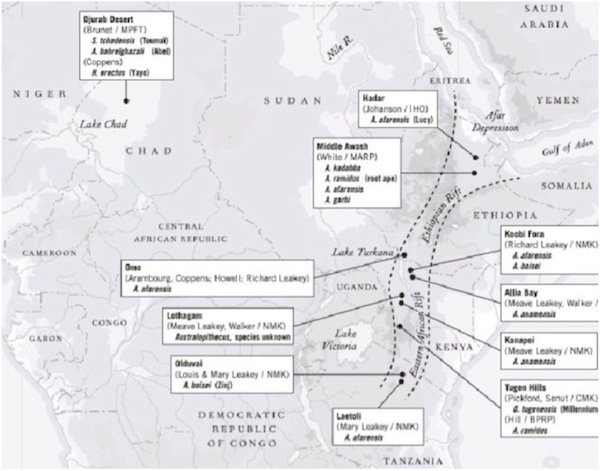 The jaw belonging to Australopithecus bahrelghazali was found in Chad in Central Africa. Evolutionists look for human ancestral possibilities in any extinct ape fossils, and many of these have been found in the Rift Valley of East Africa, with additional candidates such as Au. sediba being found in southern Africa. Map is from page ix of the book The First Human: The Race to Discover Our Earliest Ancestors.2

Most carbon is carbon-12. A tiny amount is carbon-13, a non-radioactive isotope having one extra neutron per atom. Plants utilize carbon dioxide for photosynthesis, but the first step varies. Most plants, including trees and their products like fruit and nuts, first form a three-carbon compound. Others, such as tropical grasses and sedges, can start with a four-carbon compound. Plants utilizing the three-carbon approach discriminate against carbon dioxide containing carbon-13. Therefore, high levels of carbon-13 in the Au. bahrelghazali specimen suggest it ate more like a cow than a modern ape.

Primates don’t usually eat grass, lacking a ruminant’s gastric modifications to facilitate its digestion. Therefore Lee-Thorp suggests Au. bahrelghazali may have eaten underground tubers and bulbs of these grassland plants as well as stems of sedges like papyrus. (Others note they also could have eaten grazing animals, but no one has yet shown australopithecines to be carnivorous.)

Actually, no one has shown australopithecines to be human ancestors, either. They are extinct apes. The researchers have learned something about the sorts of plants that were in their food chain. And while primates that eat grass may seem unusual, the diet likely reflects the environmental availability of food where the animal lived. It does not, however, push “back the date that our ancestors came down out of the trees and began eating C4 grasses.”3 Our ancestors were created fully human by God on the same day as apes. Conclusions to the contrary are based on numerous unverifiable assumptions about the past and the imaginative determination to explain our existence apart from a Creator.