A Tough Nut to Crack

Since its discovery in 1959, Nutcracker Man has usually been depicted as walking upright (though only a skull had been discovered). Despite the popular name, however, scientists never considered it to be human but an ape. The name “nutcracker” stuck because researchers assumed the ape’s strong jaws must have been used to crack nuts. 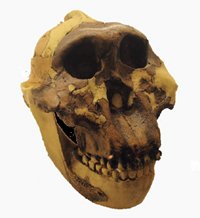 This recent research of Nutcraker Man is a healthy reminder about the limits of our knowledge about fossils.

Recent research into the molecular makeup of the teeth indicates that this ape may not have eaten nuts after all, but grass like a cow.1 This new study reinforces just how much variety may have existed among the apes, as they took advantage of a wide range of food after the Flood.

This recent study is a healthy reminder about the limits of our knowledge about fossils. The question is not whether these apes are related to humans—the Bible reveals that God made man in His image and distinct from primates. (Even evolutionists acknowledge that this nutcracker—correction, grass-eater—lived at the same time as Homo erectus.) The question is just how much variety existed among apes.

Previous Article Candidates on Creation Next Article Carlson with the Creator